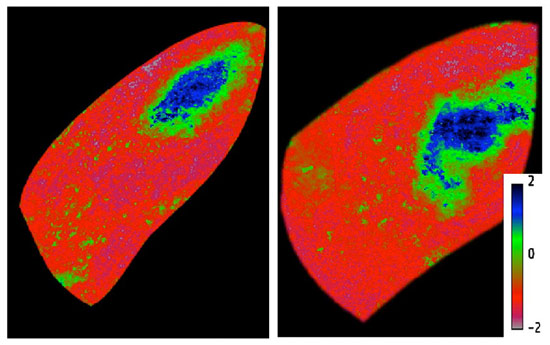 Bulls eye: In early postnatal development, neurons from the retina find the right targets in a brain area important for processing visual information in healthy mice (left) and in mice lacking MeCP2 (right).

MeCP2, the protein that’s missing or mutated in Rett syndrome, is crucial for remodeling neural circuits in response to vision, according to a study published in April in Neuron1.

Rett syndrome is a rare and debilitating disorder on the autism spectrum that primarily affects girls. Symptoms begin to appear between 6 and 18 months of age, usually beginning with a decline in motor and language skills.

Many girls with Rett syndrome seem healthy in early life, however. They can eat, sit and babble, all of which require complex neural circuits. That suggests that, at least initially, overall brain structure and circuits form normally in the absence of MeCP2.

“In the big picture, you have to think that the [neural] circuit is almost OK, that it’s much more of a subtle effect about synapses,” the connections between neurons, says lead investigator Chinfei Chen, associate professor of neurology at Children’s Hospital Boston.

Researchers have proposed that Rett syndrome and other neurodevelopmental disorders are linked to defects in how neurons change the strength of their connections — a process called synaptic plasticity.

The new study is among the first to reveal MeCP2’s importance in organizing synapses and strengthening connections in newborn mice, notes Ege Kavalali, professor of neuroscience at University of Texas Southwestern Medical Center in Dallas, who was not involved with the work.

In the first few weeks of postnatal development, visual circuits start to form through the strengthening and pruning of neuronal connections. But after day 21, equivalent to 1 to 2 years of age in the human visual system, cells in the mutant mice appear as if they are deprived of light, the study found.

Synapses within the visual circuits of these mutant mice don’t strengthen as they should after the animals open their eyes. The study suggests that MeCP2 is needed for the strengthening of neuronal connections as sight develops.

“[Loss of MeCP2] likely has an impact on how [girls with Rett syndrome] adapt to new situations and how they can remodel their neural circuits in response to environmental changes,” says Kavalali.

In 2008, Chen discovered a critical step in the development of neurons that project from the eyes to the lateral geniculate nucleus (LGN), a brain region that processes visual information.

Within the first week of life, neurons from the eye begin to form weak and diffuse synapses with neurons in the LGN. Between days 8 and 16, necessary connections grow stronger while superfluous ones are pruned.

Chen’s group found what she calls the ‘critical period:’ Starting at day 20, about a week after mice typically open their eyes, visual experiences change the strength of the connections between the eyes and the LGN2.

In the new study, Chen’s team found that, compared with controls, MeCP2 mutant neurons form more synapses, but those synapses are weaker than average in the projections from the eyes to the LGN. These differences become noticeable after day 21.

Typically, depriving newborn mice of exposure to light makes their synapses weaker after day 21. But mutant mice show no difference in the presence or absence of light.

The study helps explain why children seem healthy before they show signs of Rett syndrome — generally around 6 to 18 months of age, researchers say.

“The system develops quite normally and then something goes awry,” says Stuart Cobb, senior lecturer in neuropharmacology at the University of Glasgow in Scotland, who was not involved with the work.

Other studies of synaptic plasticity in Rett syndrome have tracked fewer time points in development.

“The authors study that [critical] phase with very precise and careful measurements at a level that has not been possible before this, at least in MeCP2 knockout mice,” says Mriganka Sur, professor of neuroscience at the Massachusetts Institute of Technology.

Sur’s team has reported that synapses in the visual cortex — an area of the brain that processes information from the LGN — of female MeCP2 mutants can change in strength even during adulthood. This suggests that their visual circuits are still immature3.

Scientists are hopeful that the late onset of symptoms in Rett syndrome means that the disorder is amenable to therapies.

In April, Cobb and his colleagues showed that the Alzheimer’s drug memantine might help strengthen synapses in a mouse model of Rett syndrome4.

Cobb’s group measured synaptic plasticity in the hippocampus, a brain area that controls learning and memory. Although memantine temporarily restores plasticity, it does not delay the onset of overt motor deficits, such as tremors or trouble walking, in the mutant mice.

Restoring expression of MeCP2 is another therapeutic strategy. In 2007, researchers showed that switching MeCP2 on in adult mutant mice alleviates tremors and irregular breathing and restores more normal levels of mobility5.

That study was in 6- to 9-month-old adult mice. “If the nervous system had grown and configured in a completely aberrant state, it would be irreparable,” Cobb notes. Instead, the study showed that it might be possible to reverse symptoms of Rett syndrome.

Chen’s group plans to study visual circuits in mutant mice by expressing MeCP2 at different points in time after birth. The key is to activate the right amount of MeCP2, because too much of it can also be detrimental.

Chen’s group also plans to test early visual circuit development in other models, such as mice lacking the fragile X gene or neuroligin-3, an autism-linked gene that plays a key role in synapse organization.

The team also plans to study the circuit in an inbred mouse strain called BTBR, which shows some behaviors reminiscent of autism.

It’s still unclear what MeCP2 is doing at the molecular level. During development of the visual system, the protein may directly interact with synapses, or play a more indirect role by repressing other genes involved in synaptic plasticity.

“That needs to be sorted out,” says Kavalali. His group is studying how the absence of MeCP2 affects signaling across synapses. “Clearly there are a number of factors that work with MeCP2 or work in parallel with MeCP2 that impact [signaling].”