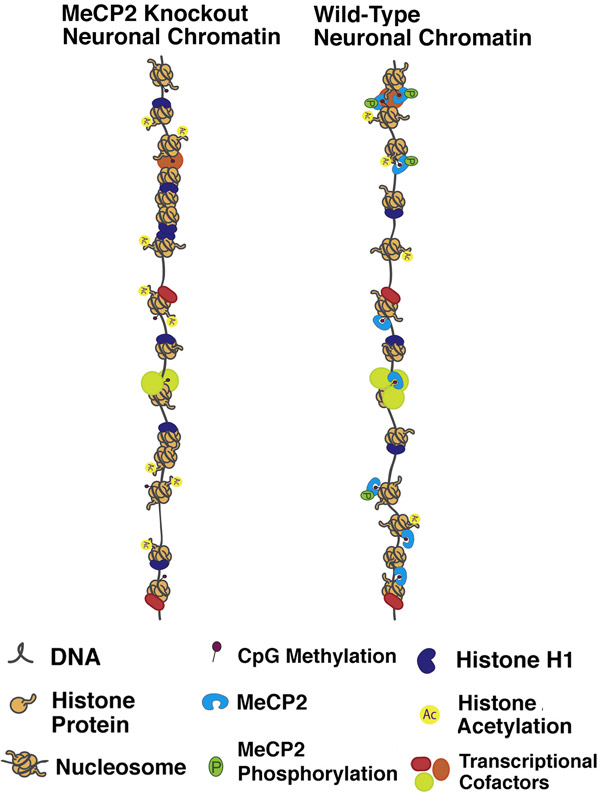 All packed up: MeCP2 keeps DNA tightly wound around spools of histone proteins, preventing genes from being expressed.

The protein that is mutated in Rett syndrome controls the expression of other genes by changing the way DNA packs into a cell, rather than turning individual genes on or off, according to a study published in Molecular Cell1.

The findings support the hypothesis that the protein, MeCP2, controls the structure of the entire genome within neurons.

In 1999, Huda Zoghbi and colleagues at the Baylor College of Medicine showed that Rett syndrome stems from mutations in the gene that encodes methyl-CpG-binding domain protein-2, or MeCP2.

Rett syndrome, which almost exclusively affects girls, is characterized by mental retardation, motor impairments and loss of language. It often includes features of autism, such as social deficits and repetitive behaviors.

Deleting MeCP2 from mouse brains causes some behavioral and physiological symptoms reminiscent of Rett syndrome, including nervousness, trembling, breathing trouble and even early death2. But scientists have been trying to uncover exactly where and how the protein acts in the brain.

Several initial studies suggested that MeCP2 is a transcriptional repressor, meaning it binds to DNA and turns off the expression of genes3. However, other experiments found that MeCP2 turns on thousands of genes4, and some studies show it even participates in alternative splicing, producing slightly different forms of the protein it encodes5.

In the new study, published in late February, Adrian Bird and colleagues found that neuronal levels of MeCP2 in the adult mouse brain are 100 to 1,000 times higher than that of other proteins that regulate gene expression.

MeCP2 binds throughout the genome, even to the regions that do not code for proteins, the researchers found. This helps explain why scientists have found so few MeCP2-specific gene targets.

“What our data say is that MeCP2 is virtually everywhere,” notes Bird, professor of genetics at the University of Edinburgh. “There was never a region which didn’t bind to show that that was a special result.”

The new results are consistent with imaging studies, which have shown that the protein is plentiful in neurons6.

“We’ve done a lot of immunofluorescence in the past, and it’s clear that at least mature neurons in the brain light up with [MeCP2 markers],” notes Janine LaSalle, professor of medical microbiology and immunology at the University of California, Davis. “But it is nice for a study to actually quantify the amount of molecules at the biochemical level.”

DNA is normally wound around proteins called histones. In neurons lacking MeCP2, histones tend to carry a chemical modification — an acetyl group — that unwinds DNA from its spools and leaves genes vulnerable to molecules that activate gene expression, the study found.

Bird’s team was the first, in 1992, to clone MeCP28. In that study, the researchers described MeCP2 as binding selectively to DNA sequences tagged with methyl groups, known to be important for gene expression.

Subsequent studies questioned that assumption, showing that in some cases MeCP2 binds to sequences that lack methyl groups9.

To settle this question, Bird’s group took a close look at two paired chromosomes: one with a methylated copy of a particular string of DNA and another with an unmethylated version of the same sequence.The researchers found that MeCP2 attaches only to the methylated bit of DNA.

“I am a true believer that MeCP2 binds to methylated DNA — that case should be closed,” says Yi Eve Sun, associate professor of psychiatry and biobehavioral sciences at the University of California Los Angeles, who was not involved with the study.

Sun says her group has also confirmed MeCP2’s preference for methylated DNA using different methods, but those results are unpublished. Her team is using a new technique to see how MeCP2 brings distant regionsof chromosomes together, influencing their physical structure.

In rare cases, the protein, which is positively charged, could still latch on to unmethylated DNA, which is negatively charged, notes Michael Greenberg, professor of neurobiology at Harvard Medical School. “Whether or not this binding is functionally meaningful remains to be determined,” he says.

The new results also do not refute the possibility that MeCP2 could also be involved in activating genes or in alternative splicing, Bird notes. Although it plays a genome-wide role, MeCP2 could affect gene expression and chromosome packaging differently in different types of cells and tissues.

“This paper alone suggests that it’s a global factor,” says Joe Zhou, assistant professor of genetics at the University of Pennsylvania. “My personal opinion is that it depends on which neuron you are looking at and which region of the brain.”

In 2008, for instance, Zoghbi’s team developed mouse mutants that selectively lack MeCP2 in roughly one-tenth of neurons within the hypothalamus, a region that regulates physiological responses to hunger and stress.

Compared with the other mouse models of Rett, these animals are aggressive in unfamiliar social situations and tend to eat more10. The mice show some Rett-like features, but they do not have deficits in motor coordination or learning, which are hallmarks of the disorder.

Other researchers have suggested that Rett syndrome arises at least in part from MeCP2’s loss in glia, cells that support neurons and help process chemical and electrical signals in the brain.

The new study further complicates this picture, finding that although MeCP2 levels are fairly high in glia, they are seven times more abundant in neurons.

Exactly how symptoms of Rett syndrome arise from deficiencies is still unclear. Bird’s group is testing the idea that loss of MeCP2 unravels DNA throughout the genome, triggering excessive gene expression and altering the levels of neuronal activity.