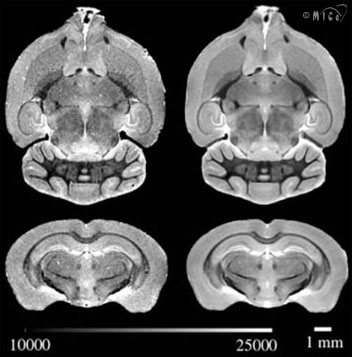 Mini skulls: Researchers can use structural imaging for detailed scans of the brains of various mouse models.

Mini skulls: Researchers can use structural imaging for detailed scans of the brains of various mouse models.

The brains of mice that model Rett syndrome are smaller than normal overall and have differences in specific regions similar to those seen in people with the syndrome, according to unpublished research presented Wednesday at the 2011 Society for Neuroscience annual meeting in Washington, D.C.

“We wanted to build on what was known about behavioral characteristics and see if that matches up with what is happening in the human brain,” says Jacob Ellegood, a postdoctoral fellow in the laboratory of Mark Henkelman at the University of Toronto.

The study is part of an ongoing project by the Mouse Imaging Center at the Toronto Centre for Phenogenomics that aims to compare brain structure across multiple mouse models, including those of autism.

For example, in October, the same team published a structural analysis of the brains of mice with an autism-associated mutation in neuroligin-3. This protein, NLGN3, functions at synapses, the junctions between neurons. The mice have smaller-than-normal volume in several autism-associated brain regions, the researchers found.

In the new study, researchers looked at the brains of 34 mice with a mutation that disrupts the Rett syndrome gene MeCP2 and 20 controls. Using high-resolution magnetic resonance imaging and detailed structural analysis, they found that the brains of the mutant mice have a smaller volume overall compared with controls.

The brain volume patterns of these three groups are strikingly similar, says Ellegood. Male mice are typically used to model Rett syndrome, despite the fact that in humans the disorder primarily affects girls.

The researchers also looked in detail at 62 different brain regions in these mice. Two regions, the thalamus and the corpus callosum, show significant differences between the mutant mice and the controls, the study found.

The MeCP2 mutant mice have a similar pattern of atypical brain structures to that of the NLGN3 mutants, the researchers found.

The researchers don’t yet know what this means. “But you can imagine that if we can get as many models as we hope we’re going to get, these groupings will be very interesting,” says Ellegood.

Correction: This article has been modified from the original. It has been changed to correct the brain size results in Rett mice.