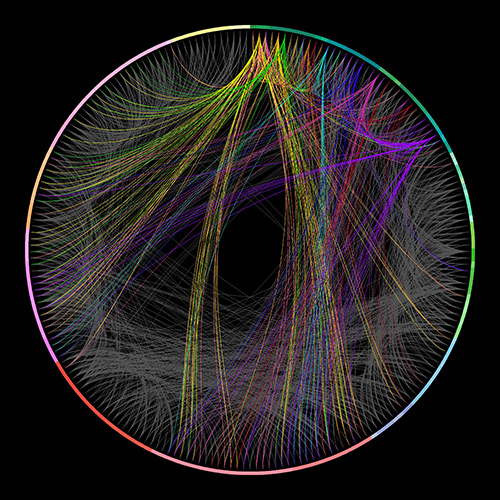 Two new maps of the brain — an atlas of fetal development and a wiring diagram in the mouse — debuted 2 April in Nature. The maps throw open new avenues of investigation into the genetic and neurological basis of autism.

The first, a high-resolution map of genetically active regions of a human brain during fetal development, offers a rare look at a high-risk period for autism-related changes.

The second is the first complete map of neuronal connections in a mammalian brain. For two decades, researchers have proposed the ‘connectivity theory’ as an explanation for autism, and waves of data now support the idea that impaired connections between brain regions characterize the condition. This new mouse ‘connectome’ presents an opportunity for studying connections in a healthy, relevant model brain.

Teams at the Allen Institute of Brain Science, which hosts open-source databases of both maps, led the projects1, 2.

In the first study, researchers analyzed four postmortem fetal brains 15 to 21 weeks after conception. The team sectioned and stained brain tissue and then isolated RNA from the cells to determine gene expression. The result is a high-resolution map of genes active in the fetal brain.

Hundreds of genes play a role in autism, but when and how they influence the condition is still unknown.

“We can really use this high-resolution approach to pinpoint which kinds of cells at what maturational state are associated with what genes,” says Ed Lein, investigator at the Allen Institute and lead author on this study.

The new work confirms their findings in part. For example, Lein’s team found some of the same key gene clusters that the earlier researchers had identified, and also flagged excitatory neurons as hotspots of activity for autism-related networks.

The atlas is part of BrainSpan, also housed at the Allen Institute, which stores snapshots of genetic activity in the human brain throughout development.

Because prenatal brain samples are rare, however, the goal of this new project was to focus on just one stage. “We decided to look at a small point in time and look in great, great anatomical detail,” Lein says.

The results zero in to the level of layers within brain regions. “It’s what we need to move the ball forward,” says Jeremy Willsey, a postdoctoral fellow in State’s lab who is unconnected with the new work.

In particular, Lein and his colleagues created a high-resolution view of the developing neocortex, the outer layer of the brain involved in conscious thought and language.

As they identify new gene networks, the researchers plan to pinpoint other layers of the brain in which to search for active autism-linked genes. “We’re looking for a place to shine the spotlight,” Lein says.

In the second study, a group led by Hongkui Zeng at the Allen Institute mapped connections among millions of neurons in the mouse brain, to yield the first connectome of a mammalian system.

The team injected a fluorescent tracer into various regions of the brain in 1,700 whole-brain samples.

“It’s like a Google Map, from the superhighway level to the local streets and to the city roads,” Zeng says.

The tiny roundworm C. elegans, a simple model system for neural wiring with 302 neurons, is the only other animal for which scientists have a mapped a complete connectome. Ongoing work in Taiwan is piecing together the connections in fruit flies across about 100,000 neurons.

With the new data in hand, “questions regarding the nature and extent of brain connectivity alterations in autism can be revisited,” says Lucina Uddin, professor of psychology at the University of Miami, who was not involved in the new studies.

Beyond autism, the new work has value to genetic and behavioral investigations of a broad range of conditions. “We need to understand mouse connectivity as background for studying genetics, behavior, as models in mice,” says Hong-Wei Dong, professor of neuroscience at the University of Southern California and leader of the Mouse Connectome Project. Dong is not connected with the new work.

Unlike Dong’s approach, which examines the cortex in detail, the Allen Mouse Connectome’s holistic view could be a window into conditions that span multiple brain regions.

A third mouse connectome project is located at Cold Spring Harbor Laboratory in New York. Researchers at the Mouse Brain Architecture Project there trace projections in both directions and make closer sections of tissue than the Allen approach does.

“We expect that our spatial resolution will be higher,” says Partha Mitra, that project’s lead investigator, adding that the Allen perspective is “certainly going to be useful.”

Ultimately, the smaller-scale mouse wiring diagram may serve as a guide to the vast Human Connectome Project, a $40 million undertaking launched in 2011 to map the wiring of live human brains.