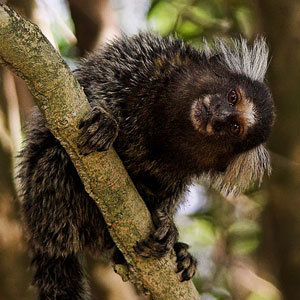 Primate perks: Marmosets make good scientific models because they reproduce quickly, show a range of complex behaviors and weigh about a pound.

Researchers in Japan are taking first steps in creating transgenic monkey models of autism, according to a poster presented Wednesday at the 2012 Society for Neuroscience annual meeting in New Orleans.

So far, the researchers have successfully tested the method in monkey embryonic stem cells, Kishi says. They plan to differentiate these cells into neurons for in-depth study in the lab.

This particular method will probably not result in a transgenic monkey, but the researchers are working on other approaches and hope to debut a monkey within three years, Kishi says. Because of animal welfare considerations, it will be important to have engineered cells for study in parallel with the transgenic animals, he says.

These trangenic marmosets will be a boon to the autism field because marmosets are more genetically similar to people than are mice or rats, and show more complex social and communicative behaviors, he says.

The cells too are likely to be useful, because they can be differentiated into neurons and used to screen drug candidates.

TSC, caused by mutations in the TSC1 or TSC2 genes, may particularly benefit from this approach, because rodents don’t mimic the disorder’s features well. The syndrome is characterized by benign tumors throughout the body and brain, as well as seizures, intellectual disability and, usually, autism. Some mice carrying TSC1 or TSC2 mutations exhibit seizures, but none carry the signature brain tumors.

Once the researchers culture monkey neurons with the TSC2 mutation, it may be possible to transfer them into the brains of mice or monkeys to see if they form tumors, Kishi says.

Marmosets are a New World species whose natural habitat is in the forests of Brazil. Compared with other commonly studied monkeys, such as rhesus macaques, marmosets have short reproductive cycles (a female can produce 40 to 80 babies in her lifetime) and are small (about a pound).

In 2009, another Japanese group created a marmoset carrying a transgene for a fluorescent protein, which made the monkey’s cells glow green1.

That work used a lentivirus to inject the gene into 91 marmoset embryos. The gene successfully integrated into 80 of the embryos, which the researchers then transferred into surrogate monkey mothers.

Since then, the Japanese government has invested heavily in the creation of transgenic monkeys that model human disease. “Our ultimate goal is to generate knockout marmosets, and [TSC] and Rett syndrome are top candidates,” says Kishi.

The new work uses a slightly different approach. The researchers crafted enzymes called TALENs (for transcription activator-like effector nucleases) that cut into the precise location of the TSC2 mutation. The study showed that the TALENs successfully interrupt the genome in cultured human kidney cells.

The major hurdle in this effort revolves around the TALENs’ efficiency. In the preliminary work on embryonic cells, the enzymes successfully cut only 1 out of 50 cells, Kishi says. The team is working on methods to boost this efficiency.