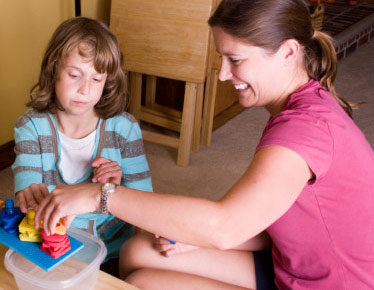 Building blocks: Researchers want to understand what makes early intervention programs work — and why some children with autism don’t respond to these therapies.

Early intensive intervention is the only therapy that has been shown to be effective in young children with autism, according to a 2011 review of autism treatments commissioned by the U.S. Agency for Healthcare Research and Quality1. In this form of treatment, skilled therapists spend up to 40 hours each week over the course of many months helping toddlers with autism develop basic social, communication and cognitive skills.

But researchers are just beginning to tease out what they refer to as the ‘active ingredients’ of early intensive intervention: why it works, which elements are essential and why it fails to help some children.

“We know that these interventions can dramatically improve function on every level, but there’s tremendous variability in terms of response,” says Zachary Warren, director of the Kennedy Center Treatment and Research Institute for Autism Spectrum Disorders at Vanderbilt University in Nashville, and a coauthor of the review. “It’s really hard for us to delineate what are the optimum interventions.”

A growing number of carefully designed studies of behavioral therapy aim to answer that question.

“We’ve realized that we can use more rigorous standards than we have in the past,” with an increasing emphasis on randomized controlled trials and long-term follow-up, says Sally Rogers, professor of psychiatry at the University of California, Davis MIND Institute.

In 1987, Ivar Lovaas, a psychologist at the University of California, Los Angeles, reported that after young children with autism underwent a long-term, 40-hours-per-week therapy program he devised, 47 percent of them achieved normal intelligence quotient (IQ) scores and were able to attend regular classes in elementary school2. Those findings touched off a flurry of interest in the Lovaas method, now often referred to as applied behavior analysis, and spurred the development of variations on his method as well as a variety of other forms of intensive intervention.

Studies of behavioral interventions have been spotty, as autism researchers focused primarily on working out the causes of the disorder. But in general they have shown much more modest results than Lovaas found. That’s one reason working out the ‘active ingredients’ of these therapies is so urgent: It may help make them more effective. And, Warren adds, even small improvements in a child’s functioning may have big effects on a family’s quality of life — for example, a child who doesn’t speak at all versus a child who speaks 20 words — but such improvements are difficult to capture with existing evaluations.

So far, two randomized controlled trials of comprehensive early interventions have been conducted. In 2000, a study of 28 children with autism or pervasive developmental disorder-not otherwise specified (PDD-NOS) found that those who received 25 hours a week of applied behavior analysis gained higher IQ scores and better language skills compared with controls3.

In late 2009, a trial of 48 toddlers with autism showed that another program, the Early Start Denver Model (ESDM), can produce similar improvements4.

The Lovaas and ESDM programs each employ a variety of methods but take different overall approaches. The Lovaas method focuses on discrete trial training, a highly structured, adult-led method in which a child is rewarded for imitating or following the instructions of a therapist. The ESDM leans heavily on pivotal response training, a more child-led approach that embeds lessons in naturalistic, play-like interactions.

“The results are so far very similar” across different models of early intervention, notes Tristram Smith, professor of pediatrics at the University of Rochester Medical Center, who has been involved in studies of the Lovaas method. “But we don’t know if they ended up at the same place because the mix doesn’t matter or because it was a different group of kids or what.”

To tease out whether one of these elements is more effective than the other, Smith is currently conducting a study to compare a six-month intervention based on discrete trial training with a play-based method developed by Connie Kasari, professor of education at the University of California, Los Angeles, and a collaborator on the study.

The researchers hope to enroll 192 children, which would make it one of the largest randomized studies of early intervention yet conducted, and expect to report results in 2015.

During the study, both groups of children will continue to receive other autism interventions that are available in their communities, and both groups will gain access to a treatment they wouldn’t ordinarily receive.

In the past, researchers have sometimes struggled to design controlled trials that are attractive to parents of young children with autism. Especially in long-term studies, parents can be reluctant to be assigned to a control group that misses out on an intervention.

“So I think it’s more attractive to families,” says Smith.

Yet researchers agree that the aim of such studies isn’t to find one-size-fits-all therapies. “There’s no one type of behavioral intervention that’s best for all kids,” says Laura Schreibman, director of the Autism Intervention Research Program at the University of California, San Diego. “We need to identify characteristics of the kids that seem to be associated with positive response to different treatments.”

Researchers in Schreibman’s lab have begun to work out some of these relationships using single-subject studies, which compare the behavior of a single child before, during and after an intervention, so that each child serves as his or her own ‘control.’ While many in the field are focused on the need for more randomized studies, Schreibman says that single-subject design can also make a contribution.

For example, Schreibman’s team analyzed videos of children with autism recorded before beginning pivotal response training, and identified behaviors, such as how often the child engaged with a toy, that were associated with whether or not pivotal response training would help the child. They found that by first generating a profile, they could predict whether a new child would be helped by this therapy5. But intriguingly, “it did not predict the outcome of discrete trial training,” says Schreibman.

Beyond finding the most effective components of therapy, researchers need to evaluate how interventions work in practice, outside the context of university studies.

“Once you demonstrate that an intervention is effective, it needs to be something that people can actually do,” says Wendy Stone, director of the University of Washington Autism Center in Seattle.

For example, 40 hours of therapy a week, as prescribed by Lovaas, is practically and financially out of reach for most families. Researchers agree that the therapy is effective in smaller doses, but the minimum number of hours needed for maximum effectiveness is unknown.

And given the relative youth of behavioral therapy for autism, no one knows whether its effects are lasting.

“One thing that we don’t know yet is how well the children maintain the gains from early intensive behavioral intervention when they get to adulthood,” says Svein Eikeseth, professor of psychology at University College Oslo/Akershus in Norway.

Eikeseth will launch a study later this year of a Norwegian cohort whose members received intensive behavioral therapy as toddlers and are now in their early 20s, noting that such studies are easier to conduct in Norway, with its small population and unified health care system, than they would be in the U.S.