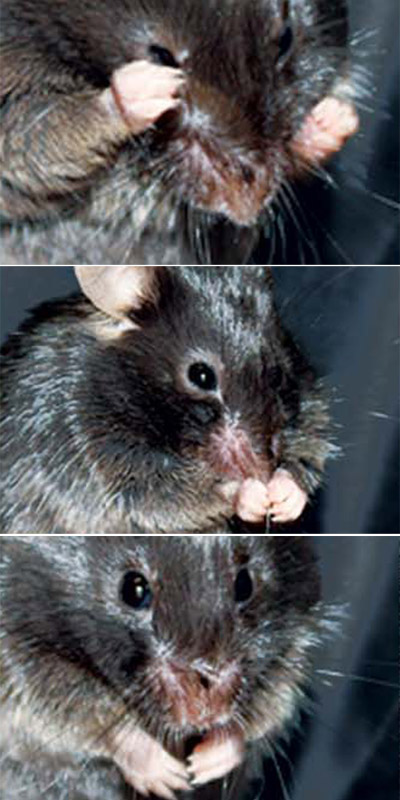 Researchers can shut down or trigger compulsive behaviors in mice by using light to target certain brain circuits, according to two studies published 7 June in Science1, 2.

The investigators aimed to uncover the brain circuits that underlie obsessive-compulsive disorder (OCD), which is characterized by obsessive rituals, such as repeated hand washing. Similar repetitive behaviors and obsessive interests are among the hallmarks of autism.

Both studies used a technique called optogenetics to activate specific neuronal circuits in live mice by shining a beam of light into their brains.

In one study, Ann Graybiel and her colleagues were able to pause the compulsion to groom in a mouse model of OCD. They did so by targeting neurons that link two brain regions, the striatum and the cortex. In the second study, Susanne Ahmari and her colleagues activated an adjacent circuit in normal mice and found that these mice gradually began to obsessively groom themselves.

Directly manipulating these circuits will allow researchers to better understand repetitive behaviors, says Robert Malenka, professor of psychiatry and behavioral science at Stanford University School of Medicine in California, who was not involved in either study. Malenka’s team also works with the OCD mouse model.

“This type of circuit-busting suggests much more sophisticated and mechanism-based treatments for OCD,” he says.

Studies have shown that people with OCD have abnormal brain activity in the striatum, which is involved in the planning of movements, and in the cortex, which plays key roles in awareness and consciousness3. But it’s unclear whether these patterns are the cause or mere effects of the disorder.

In the new studies, the researchers manipulated the activity of a family of mouse neurons that project from the cortex into the striatum.

“It’s surprising and exciting that the rodent subdivisions map onto what we know about the human anatomy so well,” says Vikaas Sohal, assistant professor in residence of psychiatry at the University of California, San Francisco, who was not involved in the studies.

In their study, Graybiel and her team used mice that lack SAPAP3, which organizes synapses — the junctions between neurons — in the striatum. These mice groom themselves so frequently that they end up with skin lesions.

Many researchers use the intensity of grooming as a proxy for obsessive behavior. But Graybiel’s team took this a step further by designing an experiment that allows them to distinguish compulsive and normal grooming.

The SAPAP3 and control mice both learn to groom in response to a tone, followed a second later by a drop of water on their nose.  Unlike controls, however, mice that lack SAPAP3 begin to groom themselves immediately after the tone, even before the water has dropped.

“They were so compulsive, once they got the idea that ‘Gee, tone means water,’ they were hooked on that,” says Graybiel, professor of brain and cognitive sciences at the Massachusetts Institute of Technology.

Shining a beam of light onto a set of neurons that project from the cortex to the striatum immediately shuts down the mice’s compulsion to groom, but not their ability to groom normally. When the researchers shut off the light, the mice resume their compulsive behavior.

The researchers say the light activates fast-spiking inhibitory neurons in the striatum, which dampen brain signals. These neurons may put the brakes on the compulsive grooming. The SAPAP3 mutant mice, which are innately compulsive, have fewer of these inhibitory neurons than controls do.

In the second study, Ahmari and her team stimulated another set of neurons that also link the cortex and striatum, but in normal mice. Activating these neurons with rays of light has no immediate effect on the mice.

However, doing so for just five minutes a day for five days leads to a spike in grooming that persists for as long as two weeks, the researchers found. It also causes the neurons to become hyperactive.

The results suggest that activity in this region can rewire the brain to generate a compulsion, the researchers say. “It takes surprisingly little to generate long-term changes, both in behavior as well as in synapse function,” says Ahmari, assistant professor of clinical psychiatry at Columbia University in New York.

Fluoxetine, an antidepressant used to treat OCD in people, reverses the effect on both the neurons and on behavior, the researchers found.

Strikingly, both new studies activate neurons that project from the cortex to the striatum, but lead to opposite effects. This suggests that distinct circuits in this region have completely different functions.

“The level of specificity of these microcircuits is breathtaking,” says Graybiel, “You can move over one millimeter and it’s as if you’re in a different country.”

There are other possible explanations, however. The SAPAP3 mice have brains that differ from those of control mice, notes Ahmari. The experimental techniques used in the studies also vary, and may affect the subsets of cells targeted.

Homing in on these differences may help scientists develop better treatments for OCD. For example, techniques such as deep brain stimulation and transcranial magnetic stimulation can target the activity of specific circuits. “We all hope that one day these lovely things we’re doing in mice will be possible in a human,” says Graybiel.