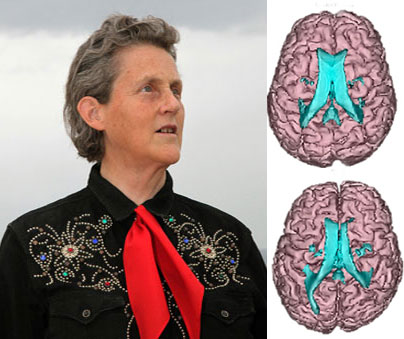 Left-leaning: Unlike controls (top), Temple Grandin has lateral ventricles (bottom) that are significantly larger on the left side of her brain than on the right.

Left-leaning: Unlike controls (top), Temple Grandin has lateral ventricles (bottom) that are significantly larger on the left side of her brain than on the right.

Temple Grandin, perhaps the world’s most famous person with autism, has exceptional nonverbal intelligence and spatial memory, and her brain has a host of structural and functional differences compared with the brains of controls, according to a presentation Saturday at the 2012 Society for Neuroscience annual meeting in New Orleans.

Grandin, professor of animal sciences at Colorado State University, is an outspoken advocate for autism research and awareness. She is known as a ‘savant,’ or a person who shows characteristic social deficits of autism and yet also has some exceptional abilities. For instance, she has extremely sharp visual acuity.

This is the first study to take a close look at Grandin’s brain, and one of the first to look at the brains of savants.

“We asked how might brain structure and function be related to both outstanding ability and outstanding disability — the autism — within the same brain?” says Jason Cooperrider, a graduate student in Janet Lainhart’s lab at the University of Utah, who presented the work.

Researchers at several institutions gave Grandin a slew of psychological tests and scanned her brain using several imaging technologies. She was 63 years old at the time of the scans.

Grandin’s brain volume is significantly larger than that of three neurotypical controls matched on age, sex and handedness. Some children with autism have abnormally large brains, though researchers are still working out how head and brain size changes across development.

Grandin’s lateral ventricles, the chambers that hold cerebrospinal fluid, are skewed in size so that the left one is much larger than the right. “It’s quite striking,” Cooperrider says.

On both sides of her brain, Grandin has an abnormally large amygdala, a deep brain region that processes emotion. Her brain also shows differences in white matter, the bundles of nerve fibers that connect one region to another. The volume of white matter on the left side of her brain is higher than that in controls, the study found.

Using diffusion tensor imaging, the researchers traced white-matter connections in Grandin’s brain. They found what the researchers call “enhanced” connections — defined by several measures including the fractional anisotropy, or integrity, of the fibers — in the left precuneus, a region involved in episodic memory and visuospatial processing.

Grandin also has enhanced white matter in the left inferior fronto-occipital fasciculus, which connects the frontal and occipital lobes and might explain her keen visual abilities, the researchers say.

Grandin also has some “compromised,” or weak, connections, defined in part by decreased integrity of the fibers. She has a weak left inferior frontal gyrus, for example, which includes the famous Broca’s area for language. She also shows compromised connections in the right fusiform gyrus, a brain region involved in processing faces.

Taken together, these findings agree with Grandin’s personal reflections of her abilities. As she wrote in her book Thinking in Pictures: “When somebody speaks to me, his words are instantly translated into pictures.”