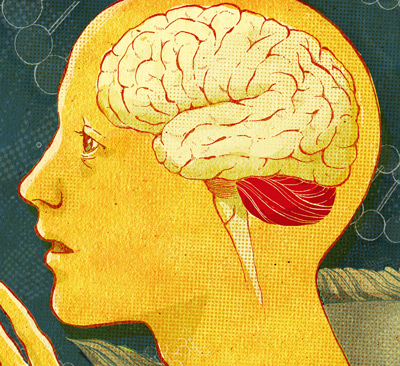 Julia Yellow Mental map: The cerebellum, an ancient region of the brain, helps coordinate how we respond to the world around us.

People with autism have trouble moving in response to something they see, a process tuned by the cerebellum. Researchers presented the unpublished study today at the 2014 Society for Neuroscience annual meeting in Washington, D.C. Another study presented today links defects in a section of the cerebellum to language problems in autism, underscoring the region’s importance in the disorder.

The cerebellum receives inputs from sensory brain regions such as the visual cortex and sends signals out to the motor cortex. It’s the region that allows us to shift our eyes when we decide to look at someone, for example. This ancient brain region evolved as far back as fish and amphibians, but often gets short shrift when researchers study complex human disorders such as autism.

In the past few years, however, researchers have begun to appreciate its importance. They are also cementing the link between the cerebellum and autism. For example, autism brains consistently show defects in Purkinje cells, which project from the cerebellum to other brain regions.

In a talk today, Matt Mosconi, assistant professor of psychiatry at the University of Texas Southwestern in Dallas, described how people with autism may get overwhelmed when translating visual information into action.

In a task reminiscent of an Atari video game, the participants try to match, and then maintain, the position of two lines on a screen by squeezing a sensor between their thumb and forefingers.

Overall, people with autism struggle to hold the mobile bar still, perhaps overcompensating when making adjustments in response to movement.

Interestingly, the participants with autism fare almost as well as controls when the experiment is moderately sensitive. They struggle both when it is too sensitive and when it is not sensitive at all. “There does seem to be this optimal window in which the visual feedback is good enough for them to make their corrections, and it’s not overwhelming,” says Mosconi.

Mosconi and his colleagues scanned the brains of 20 participants with autism and 23 controls as they performed this task in a scanner. They found that different brain pathways are involved when the test is at its most or least sensitive.

With low sensitivity, people with autism have weak responses in circuits connecting into and out of the cerebellum, suggesting that they have difficulty perceiving subtle movements of the bar. At high sensitivity levels, they show hyperexcitability in sensory regions outside the cerebellum.

“In a sense, they’re just more sensitive to any changes in the visual feedback in any direction,” Mosconi says.

The results from the low-sensitivity experiment are particularly interesting, says Samuel Wang, associate professor of molecular biology at Princeton University, who was not involved in the study.

“A lot of the tasks we give animal [models] are pretty easy,” Wang says. “The interesting thing here is that as [Mosconi] increased the difficulty of the task, he saw a stronger deficit.”

A separate team of researchers used brain scans to link defects in different regions of the cerebellum to language delay in autism. The team looked at 35 people with autism, 13 of whom have language delays, and 35 controls.

The participants with autism all have less gray matter, which is composed of the cell bodies of neurons, in one particular subregion of the cerebellum called the right crus1, which is located in the right hemisphere of the brain. This suggests that defects in this region contribute to autism symptoms. Only participants who have both autism and language difficulties show a decrease in gray matter in the left crus1.

“Within the cerebellum, you see different [circuit] loops depending on where you are,” says lead researcher Catherine Stoodley, assistant professor of psychiatry at American University in Washington, D.C. “So I think we’re getting more sophisticated in our take on the cerebellum and autism.”

Most people with autism process language on the right side of their cortex, which interacts with the left side of the cerebellum. This shift in language processing might be a compensatory mechanism, which is not possible if there are defects in the left cerebellum, suggests Stoodley.

The researchers plan to use brain scans to map links between the cerebellum and other parts of the brain. Stoodley says she is impressed by Mosconi’s assay, and hopes to use it in in her work as well.