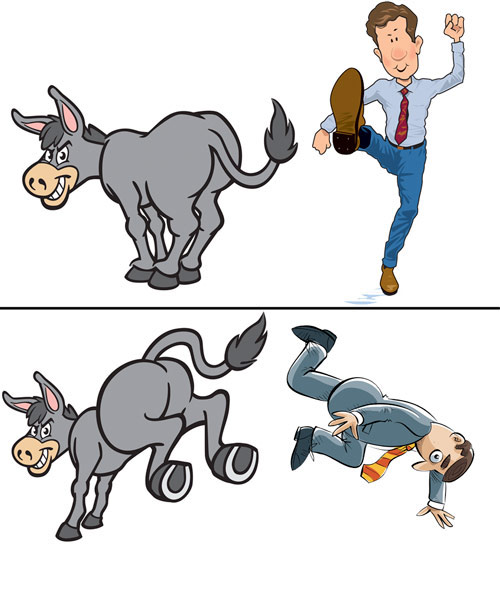 Compound noun: Hearing a made-up word like ‘donkey kicker,’ children with specific language impairment and children with autism and language problems both choose the picture of a donkey kicking a man rather than the one of a man kicking a donkey.

When toddlers fall behind in developing language skills, it is sometimes a warning sign of autism. But in other cases, the children are diagnosed with specific language impairment (SLI), a condition characterized by speech difficulties that can’t be explained by other physical or cognitive problems.

SLI is one of the most common learning disabilities, affecting perhaps seven percent of children. Some genes linked to SLI, including CNTNAP2 and CMIP, may also play a role in autism.

“Comorbidity is the rule, not the exception, in developmental disorders, so I’m not sure why comorbidity with SLI has become such a controversial idea,” says Courtenay Norbury, reader in developmental neuropsychology at Royal Holloway, University of London.

Others maintain that language impairment in autism is distinct from SLI, with a different underlying cause2.

For example, although the two disorders look similar in toddlers, they tend to diverge once the children reach school age, notes David Williams, lecturer in psychology at Durham University in the U.K. “For one reason or another, the type of language problems that you see in autism change, whereas they don’t in SLI,” he says.

What is clear is that both autism and SLI are complex, heterogeneous disorders without clearly defined causes — and perhaps as a result, the relationship between them has proved particularly difficult to untangle.

Three papers published in the past several months engage the debate about the relationship between the disorders, but their findings suggest that it is far from settled.

“You really have to do a very stepwise, detailed, incremental study of all of language, especially with a focus on cognitive and neurobiological components of it,” says Timothy Roberts, vice chair of research in radiology of the Children’s Hospital of Philadelphia. “Only then can you make a generalizable statement.”

In one of the new studies, published in Junein the Journal of Autism and Developmental Disorders, researchers asked 15 children with SLI and 17 with autism and language impairment to repeat made-up words such as ‘flebitorgist’3. They found that the children in these two groups don’t make the same type of errors in repeating these ‘non-words.’

“If language impairment in autism simply is SLI, then to my way of thinking you should show the same problems with non-word repetition,” says Williams, a member of the study team.

People with SLI tend to make specific types of errors in doing this task. For example, they have more difficulty repeating consonant clusters in the middle of a made-up word than at the beginning. Errors on the task persist even if an individual’s language improves as a result of therapy, and are considered biomarkers for SLI. “Research on non-word repetition has been central to our understanding of SLI,” says Williams.

Some earlier studies have found that children who have both autism and language impairment also struggle with non-word repetition4, but they did not work out the details.

In the new study, Williams and his colleagues found that children with autism and language impairment perform similarly to language-matched controls — children developing typically who are a few years younger — and not to those with SLI.

“We should start trying to think about what causes language impairment in autism uniquely,” Williams says. “Even if there is some overlap with SLI, I think it’s very difficult to say it’s just SLI.”

Others see the results as less definitive, however.

“I don’t think that’s such a compelling argument, because the kids who have autism and language impairment also have autism,” says Norbury, who was not involved in any of the three new studies. “Kids with autism have other difficulties that are going to color their performance on these tasks.”

For example, non-word repetition might be linked to the repetitive behaviors that are characteristic of autism, adds Roberts, who was not involved in the work. Still, he praises the team’s fine-grained approach. “They’ve made an attempt to go after the cognitive underpinnings [of this task],” he says. “I think that’s exactly right.”

A second study, yielding evidence in the opposite direction, compared the ability of 14 adolescents with SLI and 16 with autism and language impairment to interpret made-up compound nouns5. The participants listened to a taped voice reading simple sentences featuring the nouns, and had to choose which of a pair of pictures best illustrates each one.

One part of the study focused on synthetic compound nouns, which consist of a noun paired with a second, verb-derived noun, such as ‘donkey kicker.’

“We found similar performance in the children with SLI and in children [who have] autism with language impairment,” says Nick Riches, lecturer in speech and language pathology at Newcastle University in the U.K.

The two groups of participants frequently reverse the meaning of these compounds, choosing the picture of a donkey kicking a man rather than one of a man kicking a donkey, for example. In contrast, participants with autism who have normal language skills do as well on this task as healthy controls do.

The results “contribute to this hypothesis that there is an overlap in these two disorders,” Riches says.

According to Norbury, one strength of this study is that the researchers recruited participants through a population-based survey. “Sometimes when you’re picking kids up from clinics or special schools, they might have more comorbidity or more difficulty anyway, so you kind of get a selection bias,” she says. “But the fact that they for the most part are looking at a population sample there makes it reasonably strong evidence that this is a real thing.”

However, Williams says the analysis is too superficial to draw any firm conclusions.

“The test performance itself is merely an example of behavior,” he says, and it doesn’t necessarily reflect the same mechanism at play in both autism and SLI.

The third study, published in May in Neuroreport, attempts to parse the similarities and differences between autism and SLI6.

However, they found that the M100, another measure of the brain’s response to sound, is delayed in children with autism8 but not in those with SLI.

Taken together, the results suggest that it is possible to identify distinct signatures — and underlying mechanisms — for the two disorders.

Norbury says this type of research is promising. “What it helps you do is see what is specific to autism,” she says, “and what might be more aligned with the language impairment component.”