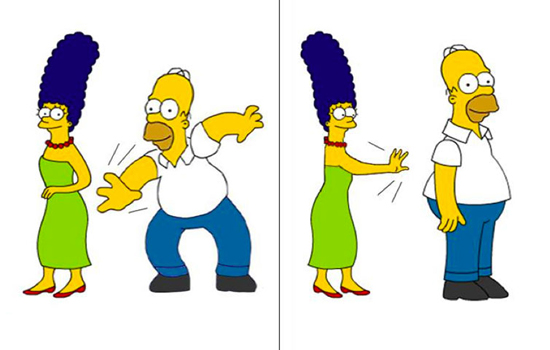 C. Hirsch and K. Wexler, 2006 Simpsonian grammar: Children with Williams syndrome have trouble understanding passive sentences, such as, ‘Homer was pushed by Marge’ or ‘Lisa was remembered by Bart’.

Children with Williams syndrome are chatty, have rich vocabularies and love to tell stories. Yet they have trouble learning certain complex rules of grammar, according to a study in the October issue of the Journal of Speech, Language and Hearing Research1.

Williams syndrome is a rare genetic disorder that leads to intellectual disability, anxiety and an exuberant friendliness. Prevailing wisdom says that Williams syndrome severely diminishes spatial and mathematical reasoning, while leaving language skills intact. The new work, however, finds that children with the syndrome do not understand passive sentences that use abstract verbs, such as ‘love’ or ‘remember.’

Several groups are beginning to delve into specific linguistic abilities of children with developmental disorders, such as autism and Williams syndrome. By comparing these groups with healthy controls, researchers hope to learn more about how language normally takes root in the brain.

“Language is probably the most complex cognitive system we have,” says lead investigator Ken Wexler, professor of brain and cognitive science at the Massachusetts Institute of Technology. “You can get a lot of insight into a system when you see what happens when it breaks down in various ways.”

Two decades ago, Ursula Bellugi‘s team at the Salk Institute proposed that children with Williams syndrome — despite not understanding numbers and showing severe problems with spatial reasoning — have exceptional linguistic skills. This bolstered the ‘modular’ theory that language develops independently of other cognitive processes in the brain.

Bellugi’s team and others have shown, for example, that children with Williams syndrome understand passive sentences — in which the object of an action is the subject of the sentence — with 80 to 100 percent accuracy. On these tasks, they score the same as healthy children matched by intelligence quotients2, and significantly better than children with Down syndrome3.

“Whatever typical kids find difficult, you see the same thing in Williams syndrome,” says co-investigator Alexandra Perovic, a teaching fellow in linguistics at University College London. “The pattern in Williams syndrome is just much, much slower, and kind of never gets there all the way.”

Wexler and Perovic tested 26 children with Williams syndrome, aged 6 to 16 years, and three groups of healthy controls who were individually matched to the Williams group based on test scores of non-verbal intelligence, word recognition or grammatical understanding.

The researchers read aloud a one-sentence caption and asked participants to point to the cartoon it matched. The scenes depicted characters from The Simpsons television series.

For example, the caption ‘Lisa is pushed by Bart’ goes with a cartoon showing Bart pushing Lisa, not one of Lisa pushing Bart. For ‘Marge is remembered by Homer,’ the correct cartoon shows a thought bubble of Marge over Homer’s head.

The researchers found a similar problem with psychological passives in five adults with Williams syndrome, Perovic says, bolstering the idea that the Williams syndrome brain is delayed for a certain period, and then stops developing.

The new study also found that, for both actional and psychological passive sentences, the Williams syndrome group performs significantly worse than do all three control groups.

This contradicts the previous studies, which found no differences between children with Williams syndrome and IQ-matched controls in understanding actional passives. The discrepancy could be explained by the sophisticated matching methods of the new study, Perovic says. She also notes that although children with Williams syndrome do not understand actional passives as well as controls do, their performance on psychological passives is far worse.

“This suggests that they may have some specific difficulties with passives, but it’s not really clear why,” notes Jon Brock, a research fellow at Macquarie University in Sydney, Australia, who was not involved with the new work.

Other experts take issue with aspects of the study’s design. Actional passive sentences are more commonly heard in everyday speech than are psychological passives, which often sound awkward. “This is something I think is likely to really influence the results, particularly in kids with developmental disorders,” says Inge-Marie Eigsti, assistant professor of psychology at the University of Connecticut.

Eigsti’s group studies autism, and has found that 5-year-olds with the disorder have specific grammatical problems — such as using less complex sentence structures — compared with both healthy controls and children with developmental delay5. She has also found that older, high-functioning children with autism have trouble determining whether sentences are grammatically correct6.

Linguistic measures — such as how well a child understands passive sentences, or the richness of their vocabulary — could be useful in genetic or brain imaging studies as a way to subgroup individuals with autism.

“Once you’ve identified linguistic subtypes, you could go back and see if there were different genetic profiles for those groups,” says Barbara Landau, professor of cognitive science at Johns Hopkins University, who studies Williams syndrome.

“The back and forth between linguistic testing and genotyping will be very useful,” Landau says.