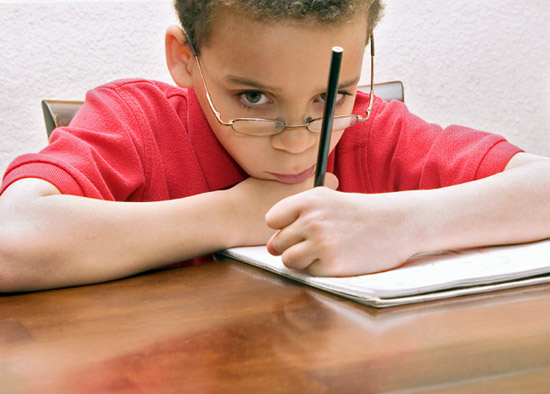 Puzzling link: More than half of children with attention deficit hyperactivity disorder meet the diagnostic criteria for autism spectrum disorders.

Children with ADHD often have problems staying still, and easily get bored or distracted while working on tasks. In contrast, individuals with autism tend to have social and communicative impairments and frequently show repetitive behaviors.

Although these core diagnostic symptoms do not overlap, behavioral differences between the two disorders can be subtle, and doctors often mistake one for the other. For instance, social withdrawal in a child with autism is sometimes mistaken for inattention associated with ADHD. Likewise, children with autism may be hyperactive as youngsters but become calmer and more withdrawn with age.

Autism and ADHD also tend to crop up in the same families, and both disorders may include aggression, disruptive behavior or problems in school. Overall, an estimated 30 to 80 percent of children with autism have ADHD1,2, and more than half of children with ADHD meet the diagnostic criteria for autism spectrum disorders.

Despite increasing awareness of this overlap, no one has found genetic variants in individuals who have both conditions. Researchers investigating each disorder separately, however, are turning up clues suggesting that the two share some genetic risk variants, brain patterns and neuropsychological features, such as cognitive, motor and language impairments. The puzzling link is described in a review published in the February issue of European Child and Adolescent Psychiatry3.

“There is a lot more to discover about the genetics of both [conditions],” notes Philip Asherson, professor of molecular psychiatry at King’s College London, who studies ADHD.

Researchers don’t yet know whether the same genes are at play when the disorders are present separately and together. The overlap has been poorly studied, in part because doctors have historically been reluctant to diagnose both conditions in the same individual.

The American Psychiatric Association’s Diagnostic and Statistical Manual of Mental Disorders, the DSM-IV, does not allow ADHD and autism to be diagnosed together, reflecting the view that ADHD symptoms in autism could be temporary or simply a consequence of autism’s complex and variable presentation.

In addition, because of the hierarchical nature of the DSM guidelines, diagnosis with a so-called ‘pervasive developmental disorder’ such as autism trumps an ADHD diagnosis.

That may change as some push for ADHD and autism to be co-diagnosed. Members of the DSM-5 Autism Work Group are debating recommending the co-diagnoses in the next version of the guidelines, set to debut in May 2013.

“Most clinicians — most people working with those with ADHD and autism — know that you see features of one in the other,” Asherson says.

Analyzing parental questionnaires, Asherson and colleagues in February reported overlap between ADHD and autism behaviors in 312 sets of 2-year-old identical and fraternal twins. They found the correlation between ADHD and autism behaviors to be fairly modest: behaviors resembling ADHD or autism overlap nearly as often in fraternal twin pairs, who share about half their genes, as they do in identical twins, who share all their genes4.

Earlier studies found that the overlap between the two disorders is more pronounced in older children. When researchers assessed 8-year-old twins from 6,771 families, for example, they found that identical twins are nearly twice as likely to show an overlap as are fraternal twins. Based on their observations, the researchers estimated that more than half of the genes involved in one condition also influence the other5.

These results may reflect the fact that ADHD and autism symptoms can become more pronounced with age, notes Angelica Ronald, a lecturer in psychological sciences at the University of London and first author of both twin studies. The genes affected in both disorders — perhaps related to brain development and behavior — may be activated with age, she says.

Other studies have found an abundance of autism symptoms in children diagnosed with ADHD.

Individuals with ADHD score higher on tests for autism-like symptoms, such as the Social Communication Questionnaire, than do their siblings or controls, the researchers reported last year6. Male siblings of children with ADHD score higher on the tests than do children in the general population. Although the researchers don’t know why brothers are affected more than sisters, the results highlight the overlap of these conditions within families and support the notion that the conditions share some genetic underpinnings.

Because both ADHD and autism appear to involve abnormal signaling between nerve cells in the brain, the promising candidates for the overlap act in pathways related to the neurotransmitters dopamine and serotonin.

Meanwhile, genome-wide association studies of individuals diagnosed with ADHD have turned up more than a dozen single-letter variations, or SNPs, that have been separately implicated in autism9. Conversely, dozens of SNPs associated with autism have been independently implicated in ADHD3.

For example, in a study of 335 children with ADHD and their parents, Peter White and colleagues at the University of Pennsylvania identified hundreds of rare copy number variations (CNVs) — DNA deletions or duplications — in ADHD families that are absent in 2,026 unaffected controls10.

Among the 222 CNVs detected in ADHD families, 4 include genes previously implicated in autism: A2BP1, AUTS2, CNTNAP2 and IMMP2L. CNVs fingered in the study also affect 15 genes linked to schizophrenia and 2 genes associated with Tourette syndrome, a neurological condition characterized by involuntary and repetitive movements and vocalizations.

What’s more, the overlapping genes tend to contribute to brain function and development. For example, a mouse study published in January suggests that the AUTS2 gene codes for a protein found in several developing brain regions, including the frontal cortex, hippocampus and cerebellum11.

Even the most frequent ADHD-related CNVs show up in only about one percent of individuals tested, however.

Getting to the bottom of the genetics behind ADHD and autism co-morbidity will require studying families in which both conditions are present, says Nanda Rommelse, assistant professor of psychiatry at Radboud University in the Netherlands and first author of the new review.

“As yet, there are no established findings at all in the genetic overlap between ADHD and autism spectrum disorders,” Rommelse says. “It’s still an area of research that has been largely ignored.”

Her team intends to genetically screen as many as 300 families over the next few years, and has already recruited 80, for an effort called the ‘Biology of Autism’ project.

The project aims to explore the role of both common polymorphisms and CNVs in co-morbid ADHD and autism cases. The researchers also plan to do neuropsychological tests aimed at finding ‘endophenotypes’, cognitive traits that can predict an individual’s risk of developing one or both conditions.