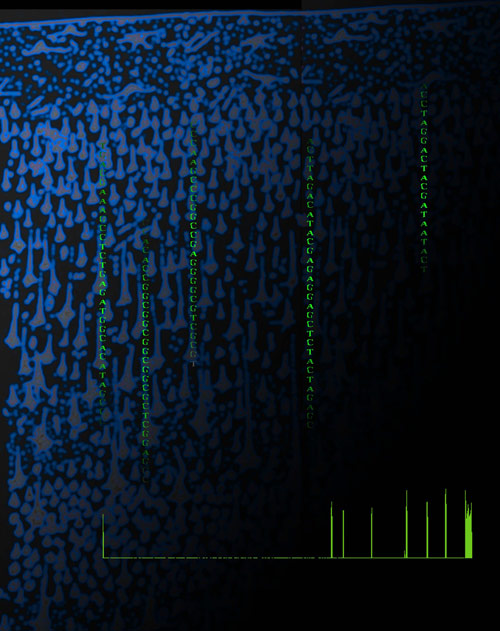 Layers of meaning: Researchers have measured the expression (green bars) of more than 11,000 genes across the six layers of the mouse cortex.

Layers of meaning: Researchers have measured the expression (green bars) of more than 11,000 genes across the six layers of the mouse cortex.

A new atlas of gene expression patterns in the adult mouse brain shows how thousands of genes are turned on in the six layers of the cortex, according to a report published 25 August in Neuron1.

The researchers have posted the data in a free online database, allowing interested scientists to look for the expression pattern of candidate genes for various diseases, including autism.

An informal search of the database shows that several autism candidate genes are selectively expressed in layer 5, for example.

In total, the resource describes the activity of more than 11,000 genes, more than half of which show selective activity in specific layers of the cortex.

“It’s very reassuring when you look at a list of genes and you know that, that’s it, there are no more,” says lead investigator Zoltán Molnár, professor of developmental neurobiology at Oxford University in the U.K.

In the past few years, the neuroscience field has invested heavily in figuring out where and when genes are expressed in the brain. The most well-known resources, such as the Allen Institute for Brain Science’s atlases of the mouse brain and the human brain, relied on techniques that only pick up protein-coding genes.

In contrast, the team behind the new atlas sequenced all of the RNA — the transcripts made from genes — found in the mouse cortex, including snippets that do not code for protein.

“This study found about a thousand active genes that don’t make protein, 600 of which were never known before,” says collaborator Chris Ponting, professor of genomics at Oxford.

This method also detects so-called ‘splice variants,’ strings of RNA made from the same gene that can encode different proteins.

The Allen atlases provide colorful pictures of gene expression in different regions of the brain, from the deep nub of the thalamus to the outer cerebral cortex.

The new collection, by contrast, is the first to organize data around the six layers of the cortex.

For more than a century, neuroscientists have recognized that these layers have distinct biological roles. They hold different kinds of brain cells, which connect to different parts of the brain.

“Most experiments to date have been taking in the whole cortex, in which all of these different elements are mixed together, and one can’t easily differentiate which part your expression signal is coming from,” notes Ed Lein, senior director of neuroscience at the Seattle-based Allen Institute. The new resource, he says, “opens up an enormous amount of extra information that we didn’t have before.”

The team first dissected by hand individual cortical layers from eight adult mice. They purified RNA from each layer and then used a method called RNA-Seq to determine the sequence of each transcript.

The resulting dataset is incredibly complex, not only because of its size, but because many genes are expressed in more than one layer. The researchers ran the data through algorithms to predict the likelihood of a given RNA being expressed in a particular layer.

They found that genes with similar functions tend to be expressed in the same layers. For example, genes related to NMDA — a receptor for the neurotransmitter glutamate — are overwhelmingly expressed in layers 2/3, whereas those associated with Alzheimer’s disease are most likely to be turned on in layer 5.

“If you can come up with a candidate gene from some other study, then you can look at datasets such as this to identify where in the brain these genes are used,” Lein says. “That information is very powerful in getting some information about what the functional consequence of that gene might be.”

Tapping the database reveals that many autism candidate genes tend to be expressed in specific layers. A splice variant of SHANK3, for example, is selectively expressed in layers 2/3. Certain versions of CNTNAP2, FMR1 and MET tend to be turned on in layer 5.

“Somebody should go down and do the whole list [of autism candidate genes],” says John Allman, professor of neurobiology at the California Institute of Technology, who was not involved with the work. “My hunch is, if you did, you’d find the bulk of the action in layer 5.”

That’s because information tends to flow through the cortex in a specific order: It arrives in layer 4, then moves up to layers 2/3, and goes back down to layer 5 before being sent out to another part of the brain.

“Layer 5 is like a choke point in the system,” Allman says. “One way of thinking about this might be [that] if you have a defect in layer 5, it could completely block that particular channel of information coming out of the cortex, or alter it in some way.”

The data on non-coding genes could also be important for the autism field, Allman says. A few years ago, researchers discovered that a non-coding RNA called HAR1F is selectively expressed in layer 1 cells during the development of the cortex2. The same cells co-express reelin, a known autism gene. “It’s a pretty good example of how layer-specific information and non-coding sequences might relate to the autism story,” Allman says.

Still, this library of gene expression would probably be more relevant to autism if it were done in a juvenile mouse, says Molnár. “If you know the time window when these diseases are manifesting, then that’s the time to look at gene expression.”

Several groups are beginning to do just that. On 22 August, Molnár’s group reported a microarray-based gene expression profile of a cortical layer in the embryonic mouse brain3. The Allen Institute is collaborating with several other institutions to compare gene expression over the course of development in human, macaque monkey and mouse brains.