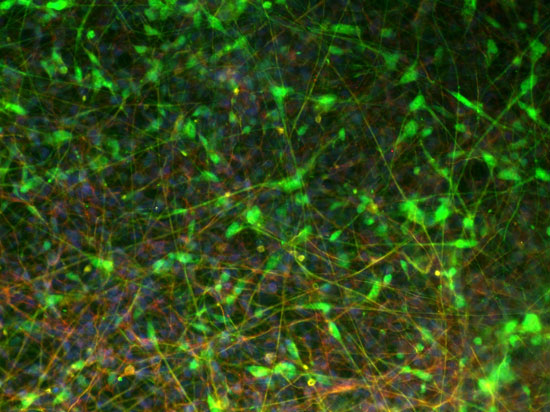 A new model system allows scientists to watch human neurons develop outside of the brain, researchers reported Sunday at the Society for Neuroscience annual meeting in San Diego.

Growing cells in a dish simulates the development of neurons in the brains of children as they grow up. The method allows researchers to identify gene expression changes that occur during development, and to manipulate the levels of genes linked to neurological disorders such as autism.

Some research teams are relying on induced pluripotent stem cells, which are derived from blood cells and can then be programmed to become neurons. Normal human neuronal progenitors, by contrast, do not have to be reprogrammed, and so provide a “more normal” model, says Genevieve Konopka, a postdoctoral associate in the laboratory of Daniel Geschwind.

Researchers produced the cells from tissue extracted from aborted fetal brains. By analyzing gene expression at two, four and eight weeks, they identified thousands of genes whose expression changes during development.

The researchers also show that genes known to be important in autism play a role in neuronal development. Several of the proteins that show peaks or dips of expression at week four, for example, have been associated with autism.

By manipulating the levels of one of these autism-associated molecules, FOXP2, a protein that activates the expression of other genes, the researchers identified several FOXP2 targets. These target genes show higher expression when FOXP2 levels are increased, and vice versa.

FOXP2 is known to regulate autism-associated genes, so some of these genes could be novel autism candidates, suggests Konopka.

For example, two of these genes, DHCR7 and NELL1, have connections to autism. DHCR7 mutation leads to Smith-Lemli-Opitz syndrome, which causes severe intellectual disability; 75 percent of people with the syndrome also have autism.

Higher levels of NELL1 lead to premature fusion of the bones of the skull, and the gene has been loosely associated with autism in some genetic studies. Work from the same lab, comparing changes in gene expression between the brains of people with autism and normal controls, has also identified NELL1 as a candidate gene for autism.

The researchers plan to further characterize all the FOXP2 target genes. The new technique will also allow researchers to easily manipulate multiple genes at the same time, something that is very difficult to do in mice, Konopka says.