Researchers look for overlap in expression of autism genes 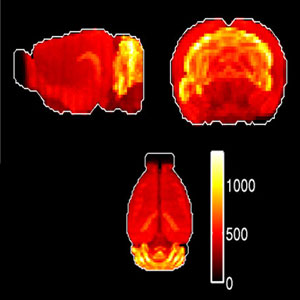 An analysis of the expression patterns of 26 autism candidate genes identifies 4 genes whose expression coincides in a part of the cerebellum, according to research presented Monday at the 2012 Society for Neuroscience annual meeting in New Orleans.

Partha Mitra, professor of neuroscience and theoretical biology at Cold Spring Harbor Laboratory in New York, and his collaborators started with a subset of genes identified as autism risk genes in AutDB, a curated database. AutDB was developed by MindSpec, Inc. and  licensed to the Simons Foundation, SFARI.org’s parent organization, as SFARI Gene.

Using gene expression data from the Allen Mouse Brain Atlas, the researchers looked for spatial overlaps in the expression patterns of these genes.

Overall, they found that the expression pattern of the autism-linked genes is more similar than that of 3,000 other genes in the brain atlas.

In particular, the researchers found four autism-linked genes — PTCHD1, GALNT13, DPP6 and ASTN2 — whose expression patterns overlap significantly in part the cerebellum, a brain region that regulates movement and other functions. The cerebellum has also been implicated in autism.

The researchers identified a network of other genes, which are not included in AutDB, that also share this expression profile. Mitra says he hopes other researchers will begin to explore these genes for a possible link to autism.