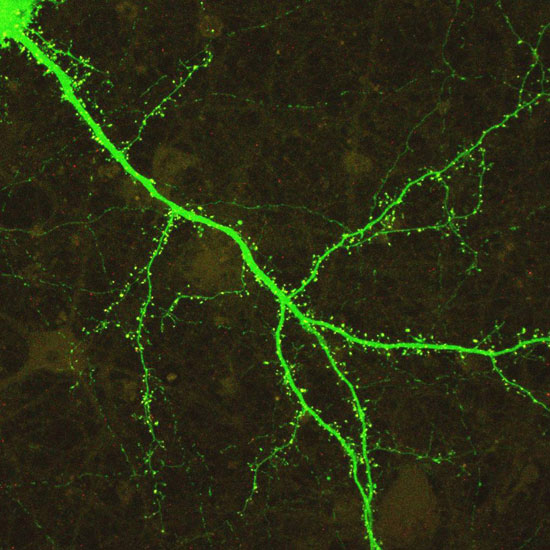 P. Penzes and Z. Xie Nervous control: FMRP acts like a switch to repress translation of RNA into protein, and may help prune synapses.

FMRP, the protein missing in fragile X syndrome, is proving to be one of the brain’s best multitaskers: It’s needed for the birth of new neurons, to regulate protein translation, and for maintaining the structural integrity of spiny neuronal projections, according to several new studies.

Scientists have been trying to pinpoint the role of FMRP, or fragile X mental retardation protein, since they first linked it to fragile X syndrome 19 years ago1. The new work supports the prevailing model that FMRP helps the brain make proteins at the synapse, the junction between neurons, even when the genetic instructions for doing so are located far away, in the nucleus.

FMRP is an RNA-binding protein, and cell-culture experiments have found that its presence curbs the translation of RNA into protein2. Bolstering this observation, mice that lack FMRP have excessive amounts of protein in their synapses. The mutant mice also have abnormally long and dense dendritic spines — neuronal projections that receive signals from other cells — suggesting that FMRP aids in synaptic pruning, a crucial part of learning.

The new studies suggest that FMRP acts as a kind of switch to repress translation of RNA into protein as the RNA is shuttled out of the nucleus, and reactivate translation once the RNA reaches its synaptic target.

“Local protein synthesis is critical to plasticity and forming memories. Some of the fundamentals are known, but I think there’s a great deal of uncertainty about the specifics,” notes Stephen Warren, chief of human genetics at Emory University. “FMRP is illuminating at least one level of that.”

An estimated one out of every three individuals with fragile X syndrome shows symptoms of autism, and the syndrome accounts for upwards of five percent of all cases of autism3. Understanding FMRP’s role in the brain is important because each link in its complex molecular chain from nucleus to synapse could provide a target for drugs to treat both disorders, Warren says.

In the 29 April issue of Neuron, Kim Huber and her colleagues revealed an intriguing new piece of FMRP’s workings. The researchers found that normal synaptic pruning requires both FMRP and myocyte enhancer factor 2 (MEF2), a protein that controls gene expression4.

MEF2 is ‘activity-dependent,’ meaning that it turns on genes based on signals it receives from outside the cell. In brain tissue, MEF2 is activated when neurons fire.

Several MEF2 targets — such as PCDH10 and DIA1 — have been implicated in autism, but this is the first time MEF2 has been linked to fragile X syndrome.

“We’re starting to put the pieces together, showing that when something goes wrong with one of those genes, you disrupt this activity-dependent synapse refinement,” says Huber, associate professor of neuroscience at the University of Texas Southwestern Medical Center in Dallas.

The findings suggest that MEF2 turns on genes in the nucleus, and the RNA transcripts from those genes then bind to FMRP. Alternatively, there could be two parallel pathways — one involving MEF2 and another involving FMRP — that must both work to ensure normal synapse elimination.

“This is remarkable work,” notes Jennifer Darnell, research associate professor of molecular neuro-oncology at Rockefeller University in New York, who was not involved in the new study. “This paper presents a very compelling and logical argument that FMRP is involved in this [MEF2] pathway.”

To better understand how MEF2 and FMRP interact, Huber’s team is looking for MEF2 targets that are not translated properly in mice lacking FMRP. One candidate protein is ARC, which is activated by MEF2, binds downstream to FMRP and, once translated, controls the expression of certain receptors at the synapse. ARC has also been linked to Angelman syndrome, a rare developmental disorder that causes mental retardation and some autism symptoms.

Darnell’s lab is trying to identify all of the RNA transcripts that FMRP binds, working under the assumption that these pathways are over-active in fragile X syndrome. Finding molecules that inhibit the pathways would have enormous treatment implications, she says. The full list of FMRP’s RNA targets is “a goldmine,” Darnell says.

So far, scientists have identified only a handful of FMRP’s targets, some of which point to intriguing pathways.

For instance, in the 30 May issue of Nature Neuroscience, researchers reported for the first time that FMRP interacts with a synaptic membrane protein. The protein, SLACK, is a potassium channel that is needed for neuronal signaling5.

In April, another team of scientists showed that FMRP controls the expression of several proteins that are crucial for the adult brain to make new neurons6. What’s more, adult mice lacking FMRP make fewer neurons in the hippocampus, a region that processes memories.  These abnormalities could underlie some of the learning problems prevalent in fragile X syndrome, the researchers say.

Meanwhile, another group found that proteins in the FMRP family are important for maintaining cell structure.

As part of their studies on cell shape and motility, Edward Manser‘s team at the Institute of Medical Biology in Singapore was searching for binding partners of a structural protein called p21-activated kinase (PAK1). This protein is important for synapse formation in the brain.

“We just went fishing, and when we analyzed the data, the only thing we got out of it were fragile X proteins,” Manser says.

In a report published in April in Molecular Cell, Manser’s team found that in zebrafish muscle, PAK1 binds to FXR1, a largely unstudied protein that’s chemically similar to FMRP7. This suggests that FMRP interacts with similar proteins to change the shape of synapses, Manser says.

“What we assume is that to make a muscle actually requires a kind of structural organization that also takes place in spine,” he says.

If this molecular connection is borne out in FMRP as well, it could lead to the development of drugs that inhibit PAK1 and similar proteins to treat fragile X, says Manser, whose lab has received funding from GlaxoSmithKline. “It’s no secret that a number of big pharma companies have programs around inhibiting PAK kinases. Clearly those compounds are in the works.”