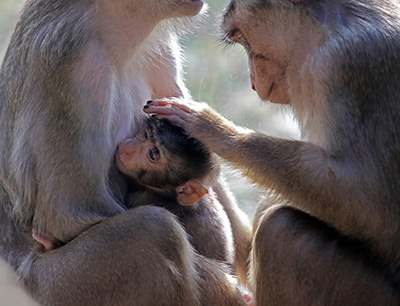 Social change: Monkeys exposed in utero to antibodies taken from mothers of children with autism approach other monkeys more often and less cautiously than controls do.

Two studies published 9 July in Translational Psychiatry bolster the hypothesis that immune molecules in a pregnant woman’s bloodstream may sometimes cause autism in her child1, 2.

The immune molecules, called antibodies, normally help the body to recognize and destroy microorganisms that cause disease. But in about 10 percent of people, the body makes antibodies that target its own proteins.

Over the past ten years, several research groups have shown that some mothers of children with autism have antibodies in their bloodstream that react with proteins in the fetal brain and perhaps set it on a path to autism.

“We’ve just scratched the surface in understanding how changes in the prenatal immune environment can alter brain development of the child,” says Melissa Bauman, assistant professor of psychiatry and behavioral science at the University of California, Davis, MIND Institute, who led of one of the new studies.

In the second study, another team of MIND Institute researchers identified seven proteins in the fetal brain that the autism-linked antibodies target as if they were foreign invaders. The researchers first revealed the identity of these target proteins in May at the International Meeting for Autism Research in San Sebastián, Spain.

“It’s a big step forward,” says Betty Diamond, head of the Center for Autoimmune and Musculoskeletal Disorders at the Feinstein Institute for Medical Research in Long Island, New York. Diamond has studied the prevalence of maternal antibodies  in women who have children with autism.

Knowing some of these targets, she adds, will allow researchers to use faster, more reliable methods to investigate the maternal antibodies.

During pregnancy, antibodies cross the placenta from a mother’s bloodstream into that of a developing fetus, helping to buttress its immune system once born.

However, a developing fetus has an immature blood-brain barrier, the filter that protects the brain by restricting passage of many molecules from the bloodstream into the brain. Anti-brain antibodies that circulate harmlessly in the adult may be able to breach a weak barrier and reach the fetal brain.

Studies have shown that mice exposed in utero to antibodies linked to autism show abnormal behavior3, 4, 5, but the new study is among the first in monkeys.

Bauman and her colleagues injected eight pregnant rhesus macaques with a class of antibodies called immunoglobulin G (IgG) taken from mothers of children with autism.

These mothers all have IgG antibodies that target fetalbrain proteins weighing 37 kilodaltons and 73 kilodaltons. According to Bauman, about 12 percent of women who have a child with autism carry these antibodies, but the combination has never been found in a mother of a typically developing child.

As in the mouse studies, the monkeys exposed in utero to autism-linked antibodies develop abnormal social behavior, approaching other monkeys more frequently than controls do. This lack of caution can be dangerous for rhesus monkeys, Bauman says.

They monkeys’ social overtures often seem to fall flat: Other monkeys respond to social contact initiated by them less frequently than to overtures from controls. “This lends support to our interpretation that these animals are somehow socially odd,” Bauman says.

The abnormalities aren’t just behavioral. The researchers scanned the brains of the young monkeys and found that among males, those exposed to autism-linked antibodies have enlarged brains compared with controls.

“That was a very convincing parallel in my mind,” says David Amaral, director of research at the MIND Institute, who led that study and also one of the new studies. It’s not yet clear why the brain enlargement is seen only in boys and male monkeys. “There are going to be lots of biological differences between boys and girls with autism,” Amaral says.

Unexpectedly, the experiments also altered the behavior of the mother monkeys. The researchers found that monkey mothers that received the autism-linked antibodies are more protective of their infants than control monkeys are.

“What it suggests to me is that the monkey mothers of the treated animals were picking up on subtle behavioral changes in their offspring,” Bauman says. Because monkey mothers that received control antibodies didn’t show this behavior, it’s unlikely to be an effect of simply introducing any antibodies, she argues.

The researchers plan to investigate the biological underpinnings of the behavioral changes and the brain enlargement by conducting postmortem studies of brain tissue from these monkeys.

Others caution that the results aren’t definitive. “There’s a lot of work that still has to be done to understand what’s happening here,” Diamond says.

For example, the monkeys were injected with the full suite of IgG antibodies simultaneously, rather than with one antibody at a time, so the culprits may be different from the antibodies the team has pinpointed.

In the second new study, researchers identified seven fetal brain proteins that are targets of antibodies found in mothers of children with autism. All seven are expressed at high levels in the fetal brain, and they play various roles in neuron development.

For example, the 37-kilodalton protein is lactate dehydrogenase, which is involved in cell metabolism.

Altogether, the researchers found that among 246 mothers of children with autism they tested, 23 percent have antibodies that react to combinations of these antigens, compared with 1 percent of 149control mothers.

“Somehow these antibodies are blocking these particular proteins from doing the job they’re supposed to do,” says lead investigator Judy Van de Water, professor of clinical immunology at the University of California, Davis.

Puzzlingly, the proteins identified are mainly found inside cells, rather than on the cell surface.

“If you have antibodies to intracellular components, then those antibodies might be biomarkers, but they’re certainly not going to be causative,” says Angela Vincent, professor of neuroimmunology at the University of Oxford, who was not involved with the work.

Still, Van de Water says, many intracellular proteins have components that are expressed on the cell surface.

In order to contribute to autism risk, the antibodies would have to be present during pregnancy.

“Actually, we don’t know when the antibodies appear,” points out Paul Patterson, professor of biology at the California Institute of Technology, who was not involved in this work. (He is collaborating with Bauman on a separate study.)

So far, researchers have looked only at antibodies in the blood of women whose children have already been diagnosed with autism. These women could have produced the antibodies sometime during a pregnancy, just after the child was born, or years before ever becoming pregnant, Patterson notes.

Van de Water says her team is following women starting before pregnancy to try to answer this question.

Eventually, the researchers say, they would also like to induce monkeys to produce their own antibodies to the proteins identified, and examine their effect on behavior. “Now that they have identified the antigens, that opens up many new avenues of research that we can explore,” Bauman says.