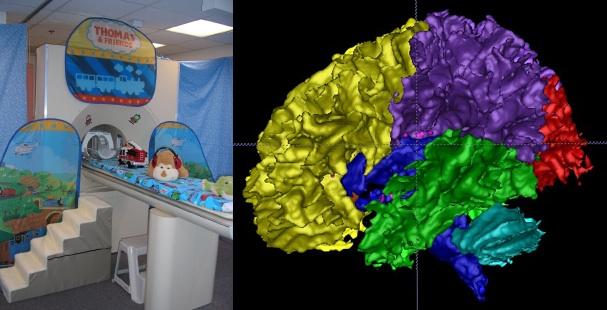 In imaging studies of children with autism, researchers are increasingly turning to methods that enhance natural sleep, rather than the traditional approach of sedating the children.

Scanning children during natural sleep makes it easier to compare brain function across groups of typically developing children and those with autism, says Eric Courchesne, professor of neuroscience at the University of California, San Diego.

“I think lots of researchers are going to move toward [natural sleep],” he says. Courchesneʼs group began putting more effort into scanning toddlers and young children with autism during natural sleep about six years ago.

Natural sleep studies are also more palatable to parents than are studies that rely on sedation, notes Heather Cody Hazlett, assistant professor of psychiatry at the University of North Carolina at Chapel Hill.

But scanning during natural sleep, especially in children with autism, is no easy feat. Young children have trouble falling asleep in a new environment or wake up midway through the scan, and the difficulties can translate into higher costs to use scanning facilities.

The problems are often worse in studies of children with low-functioning autism and in those of certain age ranges.

“With 6-month-olds, we get essentially 100 percent [success],” says Stephen Dager, professor of radiology at the University of Washington in Seattle who studies infants at high risk of developing autism. “As you start getting into the terrible twos, it gets difficult.”

Though institutional review boards (IRBs) prohibit sedation scans in typically developing children, they have traditionally allowed its use for research in children with autism. And for some parents, Dager says, the sedation route is just easier because their children have trouble falling asleep in the scanner.

But sedation also has drawbacks. Researchers canʼt make comparisons in studies of brain function between sedated children with autism and non-sedated controls, for example. Sedation can also be expensive, with costs for the pediatric anesthesiologist, the anesthesia itself, and the extra respiratory equipment.

IRBs are also increasingly more wary of sedation protocols, says Christine Nordahl, a postdoctoral fellow in psychiatry and behavioral sciences at the University of California, Davis. Nordahl says her studies have instead been incorporating strategies to get toddlers to fall asleep for magnetic resonance imaging (MRI).

Nordahl and her colleagues developed a sleep model for children with autism, aimed at mimicking the bedtime routines of individual families.

In December, they reported that among children between the ages of 2 and 5 years, about 9 out of 10 could be scanned during natural sleep. The finding was true for typically developing children, developmentally delayed children and children with autism1.

The successes, Nordahl says, are the result of teams of researchers who plan and execute the protocol. Weeks before the MRI appointment, Nordahl and the parents go over details of how the room will be arranged, what the scanner noise sounds like, and what pajamas the children will wear.

“One of the keys to our success is really individualizing [the room] for each child and family,” Nordahl says.

Courchesne, whose team has scanned hundreds of children, says his team can successfully scan, during natural sleep, between 80 and 90 percent of typically developing children and those with autism.

His work on functional MRIs in young children must take extra care to dampen the scanner noise and make sure it doesnʼt interfere with the experiments on brain activation during auditory stimuli.

Hazlett is planning to offer natural sleep as an alternative to sedation for a longitudinal study of brain structure and size in children with autism3.

Still, Hazlett and others say that even with the improved protocols, natural sleep scans will never entirely replace sedated scans. “For some of the children, natural sleep will be too difficult,” Hazlett says.

Sleep-only protocols may also create a bias in the sample by including only those children who are able to fall asleep, notes Nordahl. “Sleep disturbances and sensory sensitivities are quite common in autism,” she says.