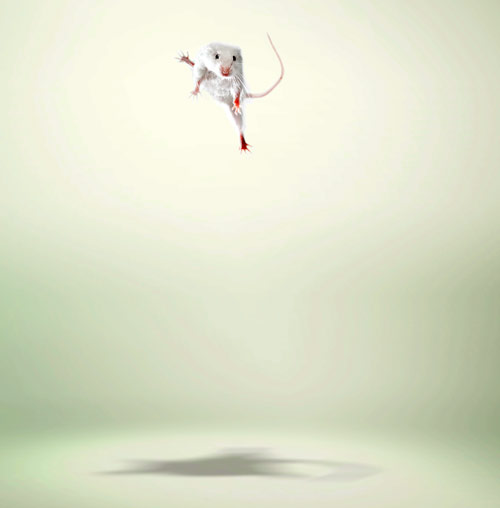 Hyper mutants: Mice lacking SHANK2, a gene linked to autism and mental retardation, frequently jump up and down.

Mice lacking the autism risk gene SHANK2 show social deficits and are extremely hyperactive, according to unpublished research presented Saturday at the 2011 Society for Neuroscience annual meeting in Washington, D.C.

“When you watch these animals in the cages, what they’re doing all day long is jumping up and down. Sometimes it’s really hard to make them calm down,” says Tobias Boeckers, professor of anatomy and cell biology at the University of Ulm in Germany. “The mice are called popcorn mice in the lab.”

SHANK2 encodes a protein that helps support the synapse, the junction between neurons. Last year, researchers found SHANK2 mutations and copy number variations — deletions or duplications of DNA — in ten people with autism, mental retardation or both.

SHANK2 belongs to the same family as SHANK3, a well-established autism candidate gene. In 2007, Boeckers was part of a large collaboration that reported SHANK3 mutations in nine people with autism1.

Since then, several groups have made mice lacking SHANK3. These animals have social deficits and compulsively groom themselves.

The new mice, which lack SHANK2, also have social problems, collaborator Thomas Bourgeron said in a separate presentation on Friday at the Cell Symposia: Autism Spectrum Disorders: From Mechanisms to Therapies conference in Washington, D.C.

During male-female interactions, male mice lacking SHANK2 sniff a healthy female less often than controls do. The researchers are also analyzing the animals’ ultrasonic vocalizations, which they use to communicate with each other. Researchers sometimes interpret abnormalities in the pattern of these squeaks as akin to language problems in people with autism.

“These mice sing less and sing differently,” says Bourgeron, professor of genetics at the Institut Pasteur in Paris.

Studies have shown that mice lacking other autism-linked synaptic proteins, such as neuroligins and neurexins, cause different molecular problems still. For example, mice lacking neuroligin-3 have increased signaling through inhibitory synapses compared with controls.

It’s curious that these models show “strikingly different changes in synaptic function,” says Craig Powell, associate professor of neurology and psychiatry at the University of Texas Southwestern in Dallas. “Yet they’re all causing the same disease.”

Boeckers says part of the reason for these variable features might be that many studies look across the entire brain, rather than at particular areas.

In the meantime, another team is moving the research into a new species.

At the session on Saturday, Joseph Buxbaum, who created the first SHANK3 mouse model, announced that his group has made rats carrying a SHANK3 mutation.

“Mice are not the be-all and end-all of model systems,” says Buxbaum, director of the Seaver Autism Center at Mount Sinai School of Medicine in New York. Rats have larger brains and neurons, which makes them easier to analyze, and the brain connectivity of rats is better mapped, he says.