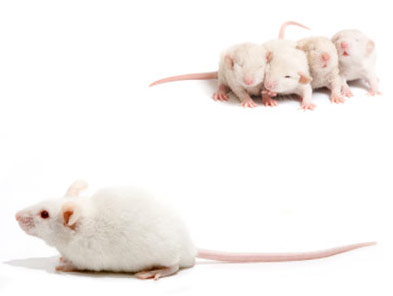 Squeaky pups: When separated from their mothers, young mice with an extra copy of the gene GTF2I emit cries of distress.

Squeaky pups: When separated from their mothers, young mice with an extra copy of the gene GTF2I emit cries of distress.

Mouse pups with a duplication of GTF2I, a gene linked to Williams syndrome and autism, show extreme separation anxiety when separated from their mothers, according to unpublishedfindings presented Thursday at the International Congress of Human Genetics in Montreal, Canada.

The gene is located in the chromosomal region 7q11.23, deletions of which cause Williams syndrome.

Mice lacking GTF2IRD1, another gene in the same region, are more social and show less aggression and fear than control mice do, according to the researchers, led by Lucy Osborne, assistant professor of medicine at the University of Toronto. These mice also have higher levels of serotonin metabolites in the amygdala and cortex compared with controls.

Serotonin is a neurotransmitter that regulates mood and has been linked to autism.

Individuals with the Williams syndrome deletion are talkative and gregarious, but have some difficulties with grammar.

Conversely, those carrying a duplication in the 7q11.23 region show some form of speech and language delay and difficulty expressing themselves. They also show symptoms of autism, including a high incidence of repetitive behaviors. Still, their cognitive ability overall is much higher than that of people with Williams syndrome.

People with either the deletion or the duplication have very high levels of anxiety and phobias, says Osborne. “But they certainly have opposing speech and language capabilities. What is an extreme strength in one syndrome is an extreme weakness in the other.”

The 7q11.23 region encompasses about 25 genes, but so far, researchers have honed in on a handful of genes, including GTF2I and GTF2IRD1.

Both genes code for transcription factors, which regulate the expression of other genes. Derived from the same ancestral sequence, the two genes appear to work together to regulate the cell cycle. Specifically, they are involved in initiating cell division.

In the cortex, GTF2I is expressed mostly in layers 2 and 3, and GTF2IRD1 in layer 5. Studies have suggested that they may also work together to create the distinctive features of the 7q11.23 syndromes, including defects in processing spatial information1,2.

Mice lacking both copies of GTF2I die in utero or soon after birth.

Last year, researchers reported that mice lacking a working copy of GTF2I show the classic hyper-sociability seen in people with Williams syndrome, and an impaired ability to recognize novel objects3.

In the new study, researchers again created mice lacking one copy of GTF2I. These mice show few atypical features other than the difficulty with recognizing unfamiliar objects. They do not show the hyper-sociability observed in the study last year, for example.

Osborne and her colleagues also made mice with either three or fourcopies of GTF2I. The mouse pups of both these strains show extreme distress when separated from their mothers. “They squeaked an awful lot more than wild-type mice,” says Joana Dida, a postdoctoral fellow in Osborne’s lab who presented the results at the conference.

This finding reflects effects of the duplication in people: 5 of 19 children with a duplication of 7q11.23 show symptoms of excessive separation anxiety, according to criteria in the Diagnostic and Statistical Manual of Mental Disorders.

However, the mice do not show any other features seen in people with a duplication of the region.

This may be because the mouse has a duplication of a single gene, Osborne says. The researchers are creating a duplication encompassing nine genes in the region, including GTF2I and GTF2IRD1.

Although many more cases of deletions have been reported in the scientific literature, the prevalence of duplications and deletions in the region is similar, Osborne says. “It’s just that the duplication doesn’t produce such a noticeable clinical phenotype.”

The team is following 45 individuals with a duplication of 7q11.23. Most parents bring children into the clinic for speech delay and behavioral problems such as oppositional conduct disorder — a behavioral phenotype that contrasts with the excessive friendliness in Williams syndrome.

Still, true ‘mirror phenotypes’ created by duplications and deletions in the same region are uncommon, says Evan Eichler, professor of genome science at the University of Washington in Seattle.

“When you find them, what they tell you is that there is a homeostasis for one of those genes: Too much is not good and not enough is not good. You’ve got to get it just right.”

More commonly, he says, “We see aspects of the duplication that don’t represent anything like what we see in the deletion.”