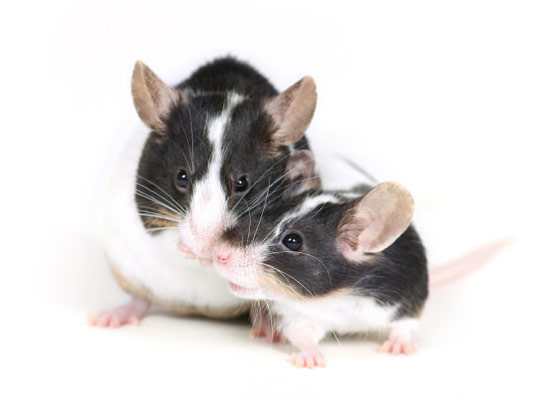 Scientists have created mice that carry mutations in one of the strongest candidate genes for autism. The animals have behavioral and neurobiological features reminiscent of autism, researchers reported 17 December in Molecular Autism1.

The animals lack one copy of SHANK3, a gene that is disrupted in about one percent of individuals with autism and that has also been linked to schizophrenia2. Compared with controls, the new mutant animals show social deficits during courtship rituals, but not in other situations.

“The evidence is overwhelming that mutations in SHANK3 can lead to autism,” notes Guy Rouleau, professor of medicine at the University of Montreal, who was not involved in the work. “But you have to do mouse models to find out what’s happening in the brain, and so this is a very nice study.”

SHANK3 encodes a protein that helps organize scores of other proteins at the synapse, the junction between neurons. For example, it interacts with neuroligin proteins, which repeatedly have been associated with autism.

The mutant mice show impaired transmission of signals through particular receptors at the synapse, suggesting that these receptors might be good targets for new autism drugs, the researchers say.

SHANK3 sits on the tip of chromosome 22 and lies within a region, 22q13.3, that’s deleted in Phelan-McDermid syndrome, characterized by low muscle tone, intellectual disability and severely delayed or absent language.

In a landmark paper in 2007, a French team screened 226 families with autism and found 3 with deletions or mutations in SHANK33. Several reports since then have confirmed SHANK3’s association with the disorder4,5.

Joseph Buxbaum was particularly interested in SHANK3 because it seemed to be linked to autism itself, rather than a syndrome, such as fragile X, in which autism is one of several symptoms.

Buxbaum’s team at Mount Sinai School of Medicine in New York City has been working on engineering a mouse model of the SHANK3 deletion for several years. They collaborated with mouse expert Jacqueline Crawley at the National Institute of Mental Health to thoroughly characterize the animals’ behaviors.

In the new study, the researchers report that during male-female interactions, male mutants show some abnormal social behaviors: they sniff a healthy female mouse less frequently and emit fewer ultrasonic squeaks. However, in other social tests — such as one that measures the animals’ interest in an unfamiliar mouse — the mutants are no different from controls.

“It’s a modest social deficit,” notes Buxbaum, director of the Seaver Autism Center at Mount Sinai. He adds that people carrying SHANK3 mutations do not always show symptoms of autism, either.

By measuring electrical activity in slices of the animals’ hippocampus — a brain region important for learning and memory — Buxbaum’s team found that, compared with controls, mutants have impaired communication between nerve cells. The researchers applied different kinds of chemical blockers to the cells and determined that the abnormal signaling occurs at one particular receptor, called AMPA.

AMPA receptors are critical players in learning and memory and are markers of synapse maturation. They use the chemical messenger glutamate, which has also been implicated in mouse models of fragile X syndrome.

The glutamate system has also repeatedly cropped up in genetic studies of people with autism. Rouleau is part of a collaboration that is sequencing about 1,000 synaptic genes in 144 individuals with the disorder, and has found that many disrupted genes are involved in glutamate signaling. “A picture seems to be slowly emerging that glutamatergic activity is going to be an important common mechanism in autism,” he says.

The abnormalities seen in the SHANK3 mutants are similar to those of mice lacking other synaptic proteins, notes Seth Grant, professor of molecular neuroscience at the Wellcome Trust Sanger Institute in the UK. His team was the first, in 1998, to create a mouse lacking one such protein, post-synaptic density-956. This month, he published an analysis of human tissue showing that the synapse holds more than 1,400 proteins that have been linked to 100-plus brain diseases, including schizophrenia, fragile X syndrome and autism7.

“Our view is that the set of proteins in these complexes is underpinning a range of cognitive disorders, one of which happens to be autism,” Grant says. To better understand the new findings, it will be important to understand how SHANK3 interacts with this large network of other proteins, he adds.

Buxbaum’s team is testing various drug compounds — some that enhance glutamate signaling, others that help insert and stabilize AMPA receptors in the cell membrane — on the animals to see if they improve the brain or behavioral defects. “It may well be that drugs that work for one type of autism don’t work for another type,” Buxbaum says. “With this mouse model, we’re trying to bring something back to the families — sooner rather than later.”