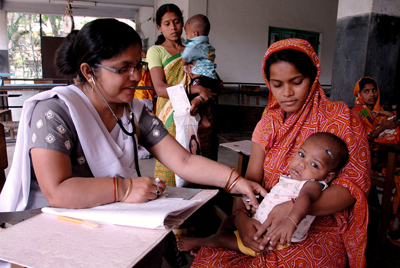 Technology transfer: To identify children with autism, low-income countries need diagnostic methods that are low cost and simple to learn.

Most of the world’s children live in low- and middle-income countries. Yet few epidemiological studies of autism prevalence have been conducted in these countries, and little is known about how the symptoms of autism vary from culture to culture.The limited data available suggest that outside North America and Europe, many cases of autism go unrecognized. A major barrier to diagnosis is the cost of assessments.

“There are glaring disparities globally, and even within the U.S., in terms of where the research on autism is being done, who is included in studies of autism and the diagnostic and therapeutic services available,” says Maureen Durkin, professor of population health sciences and pediatrics at the University of Wisconsin School of Medicine and Public Health.

In May, Durkin delivered a keynote address at the 2013 International Meeting for Autism Research in San Sebastián, Spain, in which she challenged the field to develop open-source, freely available methods for autism screening and diagnosis.

Researchers who attended her talk say she tapped into a broadly felt, but often only dimly articulated, sense that autism research needs to become more inclusive, and its benefits more accessible globally.

“We have an obligation to think as a field about how to make our methods available to all corners of the earth,” says John Constantino, professor of psychiatry and pediatrics at Washington University in St. Louis.

Western Psychological Services, a publishing company based in Los Angeles, owns many of the common autism screening and diagnostic instruments. These include the Social Responsiveness Scale (SRS), a widely used screening questionnaire that Constantino developed, as well as the Autism Diagnostic Observation Schedule (ADOS) and the Autism Diagnostic Interview-Revised (ADI-R), often referred to as the gold-standard tests for diagnosis of the disorder.

Each time one of these tests is administered, the publisher charges a fee, and passes a portion of the royalties on to the test’s developers.

“I don’t think there’s any other condition in medicine in which you have to pay a royalty to a publishing company in order to make the diagnosis,” says David Skuse, professor of behavioral and brain sciences at University College London. Skuse has helped develop two freely available tools, the Social and Communication Disorders Checklist (SCDC) and the developmental, dimensional and diagnostic interview (3di).

In many countries, paying royalties of even a few dollars represents a substantial hardship. Durkin and others say these costs not only limit access to diagnosis for individuals, but also forestall epidemiological studies, which require surveying thousands of individuals.

One reason researchers have traditionally turned to publishers is a lack of alternative distribution channels, Durkin says. A new online clearinghouse of information, DisabilityMeasures.org, attempts to address this issue by gathering free diagnostic tools for developmental disabilities such as autism.

Matthew Maenner, who created the site, says he saw the need for such a resource after developing the Waisman Activities of Daily Living Scale, a free quality-of-life assessment for teenagers and adults with autism.

“I thought, ‘How do we distribute this to people who might not think to look up our lab’s website?’” recalls Maenner, a former student of Durkin’s who is now a researcher with the Epidemic Intelligence Service at the U.S. Centers for Disease Control and Prevention. “People won’t necessarily know something is out there that could be really helpful,” he says.

Skuse has faced similar difficulties, and says the SCDC might be more widely used if it were proprietary. “It’s not advertised,” he says, “and it’s not tied in with the other mainstream autism screening instruments.” Skuse says he plans to investigate adding the SCDC to DisabilityMeasures.org.

So far, the site is primarily a catalog of free screening and assessment tools that already exist. “We hope that it grows into something more collaborative,” Maenner says. For example, eventually it could provide a platform to help researchers work together to translate and adapt measures for different cultures.

Most of the people in low- and middle-income countries diagnosed with autism are severely affected. That suggests that higher-functioning children are largely undiagnosed. “The problem with recognizing [autism] in the more subtle cases is that it is extremely difficult to do without some form of training,” says Skuse.

Skuse says the 3di, the structured interview he helped develop, would be a good model for diagnosing autism in low- and middle-income countries. The 3di is freely available, though users must pay for a two-day training session to learn how to administer it.

“Our view is that it’s appropriate to train people at a cost to make this assessment, but after that, their evaluations should be free,” he says.

However, some researchers say there’s still a place for proprietary measures.

“It could be that the community decides this has to be completely no-cost, and I would be fully in favor of that,” says Constantino. “But I think there are also options that are very low cost.”

For example, he says, the SRS is a low-cost screening measure that is simple to administer without any special training, and yields reliable results in epidemiological studies across cultures.

Others warn against avoiding the ADOS and ADI-R entirely. “We could not be doing the kind of high-level phenotyping and genetics research and imaging work without these instruments; we just couldn’t do it,” says Helen Tager-Flusberg, director of research on autism and developmental disorders at Boston University.

That means that broadening research beyond North America and Europe is likely to require using the ADOS and ADI-R, which are time-consuming and require extensive training. However, Tager-Flusberg says, healthcare workers could make clinical diagnoses, and scientists could pursue other types of studies, especially epidemiological ones, without these tests.

Scientists could also use the principles learned from these instruments, as well as other tools, to come up with new ones that would be useful in low- and middle-income countries.

There’s also a need for more training and awareness, adds Durkin. “Having the tools isn’t enough,” she says. “But it’s a place to start.”