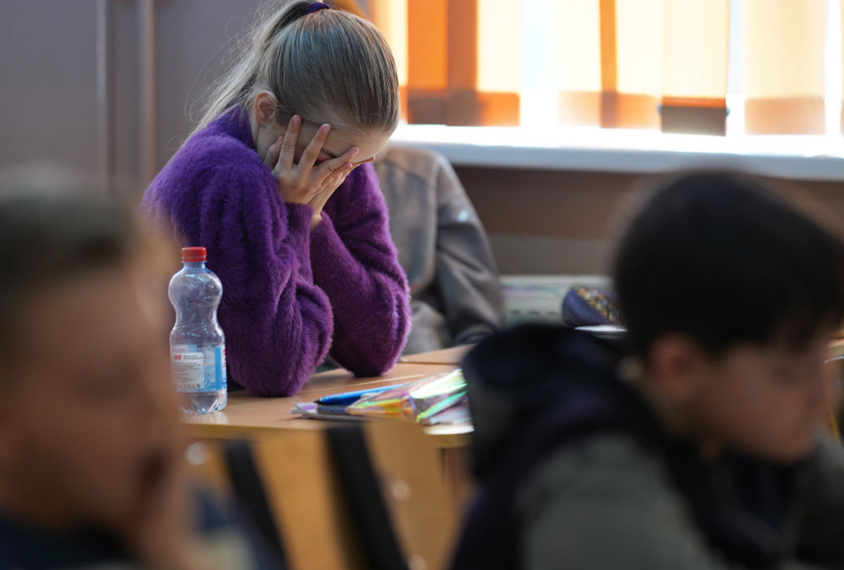 Starting over: A child who fled Ukraine with her family attends school in Romania. The war in Ukraine has displaced millions of children, including those with autism, who now need services in unfamiliar countries.

Two months ago, a two-story peach-colored building with a playground housed a kindergarten for 30 autistic children in Kyiv, Ukraine. But since Russia attacked the country on 24 February, the structure has served instead as a shelter, with the families who once received therapy and an education there — and the therapists themselves — now taking advantage of its secure basement, kitchen and food storage. All autism-related services, save for a few online sessions, have stopped. (For the group’s safety, Spectrum is not naming the center.)

The director of the foundation that runs the center, Iryna Sergiyenko, has pivoted too: Instead of running a school, she’s fielding requests from dozens of families with autistic children who need help and have, in many cases, fled Ukraine, as she has. Through messaging apps and a Facebook group she set up called ‘Ukraine autism HELP,’ Sergiyenko — who has an autistic younger brother — responds to a litany of common pleas: Will there be autism services where I am going? How do I explain why we left, and why my child’s father stayed behind? Are there any therapists who speak Ukrainian where I am?

She is one of many autism professionals scrambling to address the needs of Ukrainian autistic people whose lives have been upended. Across Europe and elsewhere, many have opened up their schools, connected families with therapists who speak Ukrainian, and collected medications and autism-friendly toys. They are raising money to support families or, like Sergiyenko, keep the lights on somewhere. One of the mothers Sergiyenko helped left for Bulgaria, noticed a lack of autism services there and immediately started organizing providers, with Sergiyenko’s support.

“That’s what we do,” Sergiyenko says. “We don’t like to sit still.”

The task they face is enormous: Nearly 5 million people have left Ukraine since the war started, according to the United Nations High Commissioner for Refugees, the U.N. refugee agency, with more than 7 million others displaced within the country. Among them are at least 4.3 million children, according to UNICEF, and some may never return home.

“We need to understand that the magnitude of the migration is staggering,” says autism researcher Katarzyna Chawarska, professor of psychiatry at Yale University.

Autistic people and their families fleeing the war need the basics: food, water, shelter and safety. But they often have additional needs that can be difficult to find under the best of circumstances, let alone in a crisis. Many people with autism prefer to follow strict routines and have anxiety — and autistic children may be especially in tune to their parents’ distress yet unable to articulate their own emotions in response. All of this can intensify the stress of the war and make autistic people more susceptible to the effects of trauma, in both the short and long terms, Chawarska says.

“The biggest concern is that our kids really have fewer resources to cope, and in some cases lesser ability to understand what’s happening,” she says.

Chawarska grew up in Poland, where many people, she says, share collective memories and trauma from the former Soviet Union’s previous aggressions toward that country. When Russia attacked Ukraine, Chawarska says she immediately thought of the families with children with neurodevelopmental conditions and the immense challenges they would be facing, whether they decided to stay in Ukraine or seek safety outside of the country.

“There’s no shortage of people who are incredibly talented and extremely willing to step in and help.” Katarzyna Chawarska

In addition to authoring a call for aid through the International Society for Autism Research, Chawarska has been coordinating with colleagues at the University of Rzeszów in Poland, about 400 miles from the Ukrainian border, to assist families crossing into the country. Many aid agencies are designed to respond to immediate needs such as food and shelter, Chawarska says, but they aren’t equipped to help with minimizing trauma or helping families find educational and therapeutic services. The university is trying to address that in part by providing trauma experts.

Many aid volunteers are also not aware of the best ways to interact with autistic people, who may have difficulties with social communication, especially across a language barrier, says Małgorzata Grobelna, a representative at the JiM Foundation, an autism advocacy organization in Łódź, Poland. JiM has its own volunteers advising aid workers on how to communicate in a clear, precise way — avoiding metaphors, for example, and using short, simple sentences. “It’s already making a difference,” Grobelna says.

Her team is working on many fronts: raising funds for families, providing legal aid, collecting necessities and operating a phone line with Russian, Ukrainian and English speakers to field requests from stranded families. They also run a school for children with autism and other disabilities, which has opened to Ukrainian children. One student, a 7-year-old autistic boy named Artem, had already lost some of his verbal abilities and independent skills in the month since his family began seeking help, Grobelna says.

“You can already see how many steps back that brought him,” she says. “It’s really heartbreaking to know what they experienced and what they escaped from, but also it’s very wholesome to see that slowly they are getting into the new routine and finding friends. It’s a little bittersweet.”

Although most of the response thus far has been to provide immediate help, organizations and countries will soon need to begin thinking longer term — “moving from the crisis mode into management mode,” Chawarska says.

Finding ways to track where families with autistic members end up would help, in order to better understand what they need and how to reach them, she says. Countries such as the U.S. could also earmark parts of their relief funds specifically for families with autistic children and those with other disabilities. The U.S. and Europe should increase communication to bolster the process, she says.

“There’s no shortage of people who are incredibly talented and extremely willing to step in and help,” Chawarska says. “We just need to have a better sense of how to be most effective.”

Sergiyenko’s team is already planning for the future. Large swaths of Ukraine had few autism specialists before the war, and many have fled; a good portion will not come back, Sergiyenko suspects. One of her colleagues is investigating how to get funding for training to cover the gap. Sergiyenko and her colleagues are also strategizing about how to help families who will want to return to Ukraine but no longer have a home. 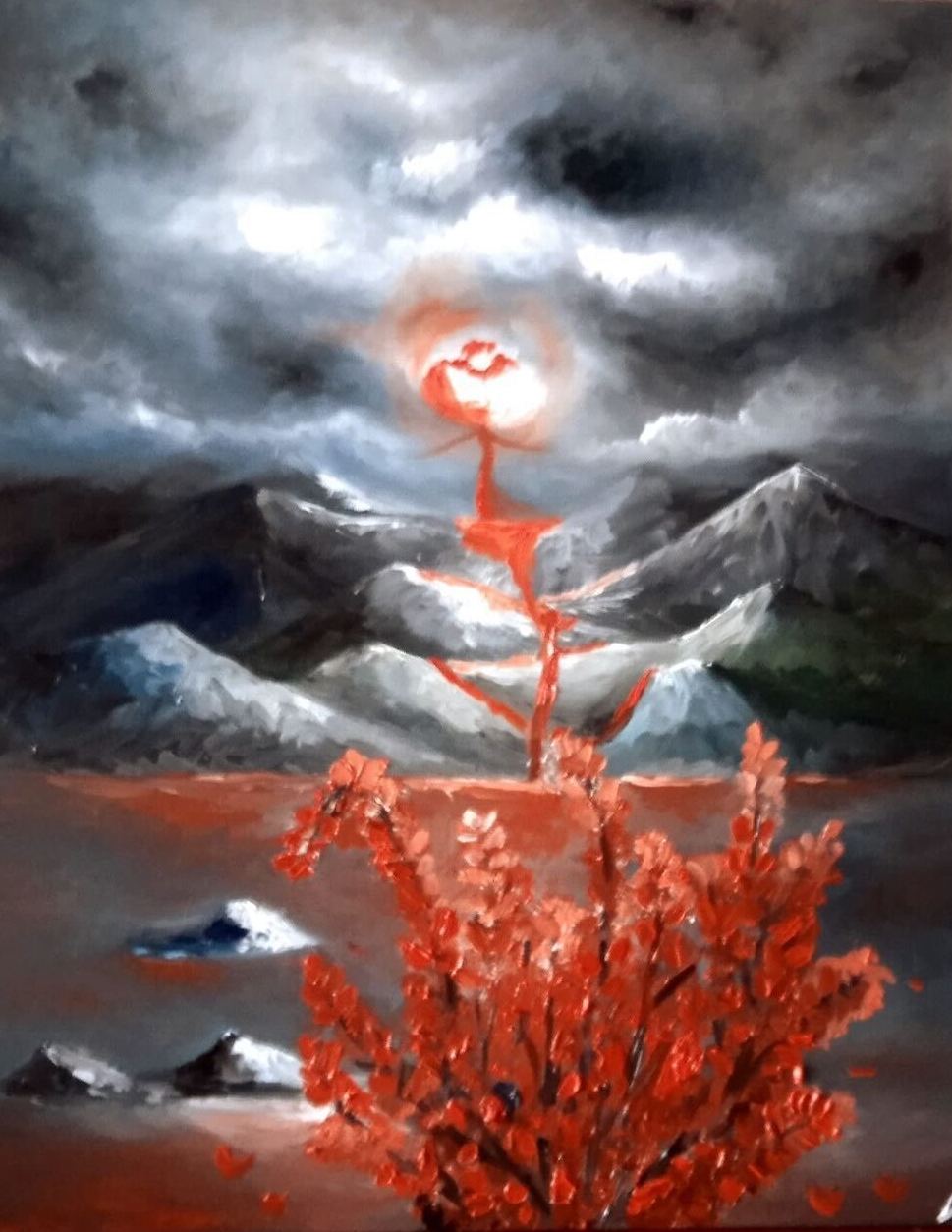 In the meantime, families in Ukraine continue to struggle, Sergiyenko notes. Autistic children’s routines now include learning safety measures such as how to respond to an air-raid siren — go to the basement — and how to tape up windows to prevent flying broken glass. Some families are still living in shelters or underground in the metro stations, which are crowded and noisy and can exacerbate an autistic child’s sensory problems.

“Can you even stim? Can you vocalize? Can you do any of the self-regulatory things you’re used to doing?” Sergiyenko says. “Usually, the answer is no.”

A woman Sergiyenko is close with lived in Berdyans’k, a port city now under Russian control. Her 11-year-old son, Max, is autistic. He enjoys painting and, since the war began, has taken to walking around his backyard wrapped in a Ukrainian flag. Max is furious about the war, Sergiyenko says, but doesn’t understand the danger of sharing his views: He recently walked up to a Russian soldier and asked him when the soldier was going to die.

After several weeks of looking for a way out of the city, Max’s mother managed to find a ride in a minivan, following Sergiyenko’s advice to avoid a ‘green corridor’ that may have been a trap. She had to give Max sleeping pills to ensure his safety at Russian stops. For now, they are staying in Ukraine, and Sergiyenko is staying in touch to make sure they have what they need.

“It doesn’t feel like enough, but we do what we can,” Sergiyenko says. “It feels like it’s never enough.”