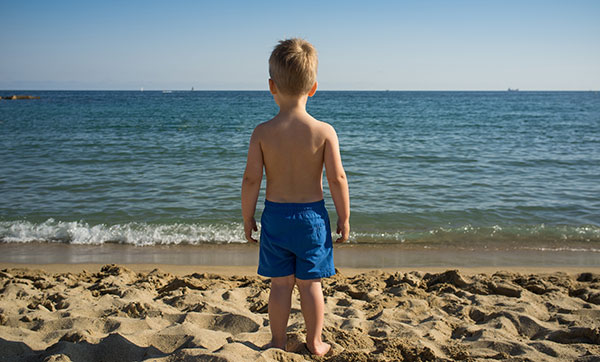 Safety check: Children with Angelman syndrome are fascinated by water, but treatment with the antibiotic minocycline may help them appreciate its dangers.

Researchers are scouring the ranks of well-established drugs to look for safe ways to treat Angelman syndrome, an autism-related neurodevelopmental disorder characterized by developmental delay, lack of speech, motor deficits and seizures.

An antibiotic used to treat acne, a dietary supplement and a failed sleeping aid each show promise for treating the disorder, says Edwin Weeber, professor of neurobiology at the University of South Florida in Tampa. He presented the preliminary results Tuesday at the 2015 Keystone Symposia: Pathways of Neurodevelopmental Disorders meeting in Tahoe City, California.

“I think with any neurocognitive disorder, especially in children, you want to focus on things that are going to be less experimental, more tested, more safe,” Weeber says. “If you can find something that’s Food and Drug Administration (FDA) approved, or something that is going to be handled better by the body and the brain, that makes for a more attractive therapeutic.”

The antibiotic minocycline has long been used to treat acne, but it also crosses easily into the brain. Its effects there are unknown, but studies show that it aids in the maturation of the signal-receiving branches of neurons, called dendrites. A clinical trial of minocycline treatment in children and adolescents with fragile X syndrome showed subtle overall improvements and decreased anxiety after three months1.

In mice modeling Angelman syndrome, Weeber and his team showed that minocycline helps neuronal junctions, or synapses, adapt to new experiences — a process that underlies learning and memory. Based on these results, they tested the drug in 25 children with Angelman syndrome, ranging in age from 4 to 12 years.

The drug showed no adverse effects, according to preliminary results published late last year2. Overall, the children showed subtle improvements eight weeks after treatment stopped, according to a rating scale in which clinicians and parents give an overall rating of the child. But the tool did not capture some important improvements, Weeber says.

For example, children with Angelman syndrome tend to be fascinated by water — a quirk that can turn treacherous around swimming pools or other open bodies of water. After eight weeks of minocycline treatment, some parents said their children seemed to better understand the potential dangers of water.

Research on Angelman would benefit from a rating scale specific to the disorder that can capture these subtle but meaningful improvements, says Weeber. He is also looking for more objective measures, such as tools that assess a child’s gait or speech.

His team is also pursuing other treatments. Many children with Angelman syndrome experience frequent seizures. Studies have shown that a high-protein diet, which induces a starvation-like state called ketosis, can help ease seizures. But dietary treatments pose a problem for children with Angelman syndrome, who tend to be picky eaters and easily sickened by certain foods.

To circumvent this, Weeber and his colleagues have developed a supplement that boosts ketone levels without necessitating a change in diet. An eight-week treatment with this supplement alleviates seizures and improves memory in mice modeling Angelman syndrome. The mice are also less clumsy and and less likely to clasp their hind limbs together — behaviors reminiscent of the gait problems and hand-flapping seen in children with the disorder. This is the first time a treatment has eased motor deficits in mice modeling Angelman syndrome, Weeber says.

Weeber and his colleagues are also planning a clinical trial later this year to look at the effects of gaboxadol, a drug initially developed as a sleep aid. Gaboxadol, which is thought to ramp up the activity of brain-calming neurons, had reached the final stages of clinical trials when it was found to trigger hallucinations in people recovering from substance abuse.

Still, a low dose of gaboxadol would be safe in children and may ease symptoms of Angelman syndrome, which, like autism, is thought to stem in part from an imbalance between excitatory and inhibitory brain signaling, Weeber says.

“Gaboxadol didn’t become the billion-dollar drug that companies thought it was going to be, but who knows what other disorders it may be able to treat,” he says.

Other researchers are similarly excited about the possibility of using safe, well-tested drugs to treat childhood neurological disorders. But they caution that this approach is a gamble because it doesn’t always target the biological defect at the heart of the disorder.

“Many of these kids have severe symptoms. When you can find drugs that are available, FDA-approved and that you can test, it’s hard to imagine not doing that,” says Anne West, associate professor of neurobiology at Duke University in North Carolina.  “At the same time, is it raising false hopes? You have to be thoughtful about the pathway that you’re targeting. Some of these candidates are getting farther away from that.”