Reactions from the 2020 SYNGAP1 Scientific Conference 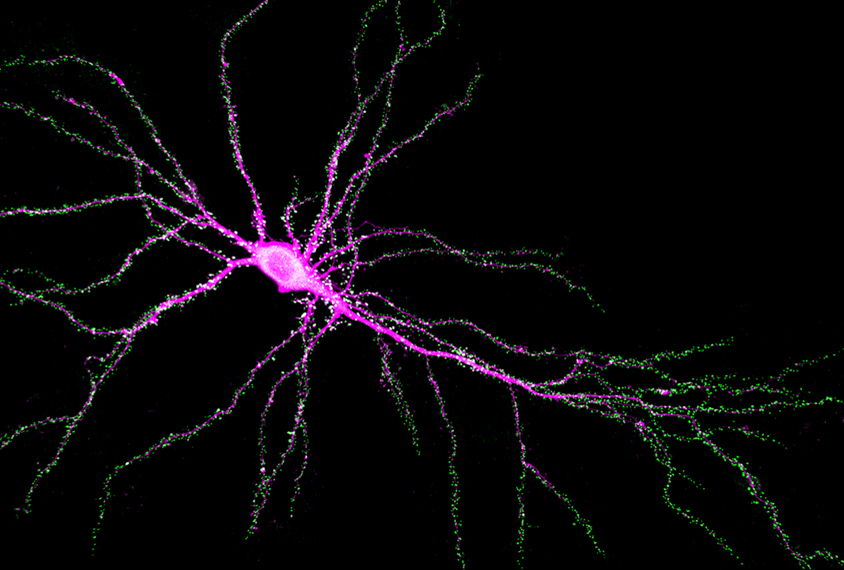 Bridging the gap: SYNGAP1 protein is located mostly at synapses, the junctions between neurons (green).

This article was originally published on 24 November, based on preliminary data presented at a conference. We have updated the article to provide additional context.

Drug test: A new assay allows researchers to test thousands of candidate drugs for their ability to boost expression of the autism gene SYNGAP1. The tool may help researchers identify and screen potential treatments for people with mutations that silence the gene. Gavin Rumbaugh, professor of neuroscience at Scripps Research in Jupiter, Florida, presented the unpublished results on 18 November.

The assay uses neurons from mice with one intact and one mutated copy of SYNGAP1. The researchers genetically engineer the mice so that SYNGAP1 protein made from the intact copy is tagged with luciferase — the enzyme that gives fireflies their glow.

They then grow these neurons in tiny wells and add a different candidate drug to each well. “The amount of SYNGAP1 protein in the dish gives a proportionate amount of light in your well,” Rumbaugh says.

Rumbaugh and his team plan to use the platform to run through more than 100,000 different experimental compounds in 2021, he says.

“That’s going to be really exciting for drug discovery efforts for SYNGAP1. I think that’s going to be a game changer,” says Karun Singh, senior scientist at the University Health Network in Toronto, Canada, who was not involved in the work.

“It will be very exciting to see if they are able to uncover any useful hits with their novel approach,” says Helen Bateup, associate professor of neurobiology at the University of California, Berkeley, who was not involved in the work.

Treatment across ages: A leading theory of autism is that the condition is characterized by a signaling imbalance: too much excitation or too little inhibition in the brain. One of the key players in creating this imbalance is thought to be inhibitory interneurons, which employ the neurotransmitter gamma-aminobutyric acid (GABA). And mutations to SYNGAP1 may disrupt GABA’s function, said James Clement, assistant professor of neuroscience at the Jawaharlal Nehru Centre for Advanced Scientific Research in Bangalore, India, in a presentation on 18 November.

GABA is excitatory early on in brain development and inhibitory later on — a switch that seems to be impaired in mice with SYNGAP1 mutations, he says. He and his team have tested a new compound that restores the GABA switch in mice and eases almost all SYNGAP1-related traits — including seizures, learning issues and motor impairment — in the mice. It works in newborn and adolescent mice. Due to a pending patent application, Clement and his lab are not revealing the compound’s name.

“I think it’s important to test efficacy at multiple ages, as they have done, to understand which phenotypes or problems can be improved with early treatment and which might still be responsive to treatment even if it’s administered later in life,” says Bateup, who was not involved in the work. “The idea that GABA may remain depolarizing for longer in SYNGAP1 mutant mice is quite interesting.”

Clement’s lab was “the only other lab that was presenting at this meeting that presented data from a very early age,” says Shilpa Kadam, associate professor of neurology at the Kennedy Krieger Institute in Baltimore, Maryland, who was not involved in the work. Kadam also presented results on mice with SYNGAP1 mutations, showing that from an early age, these animals have seizures that can be treated by blocking one type of GABA receptor.

Motor coordination:  For mice, the loss of SYNGAP1 function in the striatum impairs their goal-directed learning and seems to lead to inflexible behavior, Bateup said in a presentation on 18 November.

“Helen Bateup’s work looking at striatal function as it relates to motor coordination and motor learning is also pretty exciting and may shed light not only on the motor-coordination difficulties but also the repetitive or habitual motor behaviors,” says Constance Smith-Hicks, child neurologist and research scientist at the Kennedy Krieger Institute, who was not involved in the work.

Bateup’s presentation also demonstrated that SYNGAP1 deletion seems to affect neurons differently depending on which type of dopamine receptor they express.

“We know SYNGAP1 is at most excitatory synapses, so why she’s seeing some functional effects in one type of cell and not the other, I find that interesting,” says Richard Huganir, professor of neuroscience and psychological and brain sciences at Johns Hopkins University in Baltimore, Maryland, who was not involved in the work.

“It’s exciting to be able to kind of pinpoint which pathway might be involved and get a better understanding of the circuits that are disrupted,” says Singh, who was not involved in the work.

Protein levels: People with a nonfunctional copy of SYNGAP1 have about half the typical amount of SYNGAP1 protein. Increasing the activity of the intact copy of the gene could help restore typical functioning, Huganir said in a presentation on 18 November.

He and his team tested this idea on two unique mouse models in unpublished work. Instead of having one intact and one missing copy of the SYNGAP1 gene, as is typical for SYNGAP1 mouse models, each mouse model carries one intact copy of the gene and one with a mutation seen in people. Both mice produce about half the typical amount of SYNGAP1 protein and show the same behaviors as the ‘classical knockout’ mouse, despite having different types of mutations.

These new mouse models are crucial because “they can directly correlate to what is happening in the humans,” says Clement, who was not involved in the work.

Huganir and his team are testing different types of gene therapies to increase SYNGAP1 protein up to the typical levels, and have found that there are two SYNGAP1 protein isoforms, or slight variations of the protein.

“One of the isoforms can restore synaptic plasticity in the animal model for SYNGAP1, so I think that’s really exciting because even though there’s multiple isoforms, it seems that one might be more important from a gene therapy point of view,” says Singh, who was not involved in the work. “It’s pretty exciting to have a specific target now.”