We checked in from Atlanta, Georgia, where the 2014 International Meeting for Autism Research ran 14-17 May. Read below for daily posts about the conference and initial reactions from the attendees.

Saturday brought the lone purely genetics-focused oral session of the conference, with new work suggesting that one of autism’s strongest risk genes may lead to the discovery of a large set of more ‘high-confidence’ risk genes. Our on-site reporter, Jessica Wright, covered the finding here, along with many other breaking reports from the conference, all of which can be found in our IMFAR 2014 section.

Overall, this year packed an ambitious agenda into a precious two-and-a-half day window. Hats off to the organizers for making key adjustments to the program format. For instance, tweaking the timing of the poster sessions (and adding a cash bar!) to make them more social and interactive proved a much-appreciated change, according to the attendees I spoke with. Similarly, the early-career workshop was a real hit with both the trainees and mentors who participated.

See reactions from attendees below, and you can find my final meeting wrap-up here.

Good news, bad news: “This morning’s keynote by Marsha Mailick was both depressing and inspiring. Her finding that adults show such great decline in middle age, on average, is depressing. On the other hand, it was exciting and surprising to see that symptom profile continues to change in adulthood.”

Not just children: “This suggests continued brain plasticity during this period and speaks to the urgent need to develop interventions and community supports for this group with the same intensity and rigor that we apply to interventions for young children. Particularly striking was that adults in structured day settings, including jobs, showed continued reductions in autism symptoms.”

Diagnosis as guide: “So far, a highlight for me was the panel organized by Eric London, on ‘Characterising autism: a re-examination of the diagnosis and the phenotype.’ London suggested adoption of a meta-structure of neurodevelopmental disorders where the ‘disorders’ are characterized in multidimensional terms. The diagnosis of autism should be seen as a tool to inform clinical and educational decision-making, rather than a phenotype that reflects a valid disorder with a discrete biological substrate.”

Patient view: “With regard to the discussion of the National Institutes of Health’s Research Domain Criteria (RDoC), specifically, Ann Wagner said that diagnostic categories such as autism spectrum disorder were never intended to reflect biological reality. But there was a concern expressed by others that as the biological processes envisaged by the RDoC project may take decades to be elucidated, what are the likely benefits to patients of the project going to be in the meantime?”

So far: “Marsha Mailick opened her outstanding keynote by reflecting on the fact that the 8-year-olds in Leo Kanner’s original study would now be 79 on average. It’s amazing to think that, despite how much we have yet to learn, everything we know about autism has been learned in a person’s lifetime. Not bad.”

Road ahead: “Marsha’s talk also highlighted a few key targets for progress. Given the evidence that successful vocational experience predicts behavioral improvement, the attrition of women from vocational settings must be addressed. Why are women more likely to participate for fewer hours over time? The poorer trajectory for lower-income families transitioning out of high school makes clear the need for more publicly funded services at this transition.”

Machine diagnosing: “One really provocative presentation today was by Colleen Chen and her colleagues at San Diego State University on using resting-state functional magnetic resonance imaging (fMRI) data to predict autism classification. They used data from the Autism Brain Imaging Data Exchange (ABIDE)— a collaborative database — which allowed them to analyze data using very cool machine-learning algorithms from large numbers of participants with autism and age-matched controls. Their analysis looked at connectivity between regions of interest, and this approach led to over 90 percent correct classification, which is pretty impressive!”

Surprising connections: “Of greatest interest to me was the fact that the connections that were most significant in the prediction algorithm involved somatosensory and motor regions and the default network, even though we might have expected that social regions would have also been significant predictors. This new approach to fMRI data from people with autism, made possible by the ABIDE data repository, allowed the researchers to begin analyses based on much larger sample sizes than we have seen before.”

Professor of Psychiatry, University of North Carolina School of Medicine; Director of the Carolina Institute for Developmental Disabilities,

Euro-vision: “Of all I heard today, what stood out was the keynote of Declan Murphy. What I found so inspiring was the level of organization and cooperation in Europe between multiple (14!) academic centers, Autism Speaks and industry under the umbrellas of the Innovative Medicines Initiative and the EU-AIMS project. I think this is extraordinary and what will be required to launch the various pipelines of translational research — from cells to services — that are our best hope to move forward with effective treatments.

Back home: “The follow-up experiment? I think we need to figure out how to raise the level of interdisciplinary collaboration in the U.S.”

Pointed questions: “I attended a very good session today (Gesture, Speech and Social Communication) that addressed many aspects of communication in children with autism and raised fascinating questions about which aspects of communication are inherently entwined or linked with each other or other factors — for example, general intelligence and social motivation — and which represent separate systems. New findings presented during the session show that the use of pointing gestures — but not other gestures — predicts acquisition of vocabulary, and that deaf children with autism use fewer person-related but not object-related pointing gestures.”

On Friday, 16 May, at 2 p.m. Eastern, we’ll host a moderated Q&A via Twitter, live from the floors of the 2014 International Meeting for Autism Research in Atlanta. The chat will appear on @SFARIorg with the hashtag #IMFARchat.

The discussion will gather key researchers, stakeholders and journalists at the conference and from around the world to react to some of the major themes and open questions that emerge during the meeting.

Some of the participants confirmed to join us so far include Francesca Happé, president of the International Society for Autism Research; Kevin Pelphrey, Harris Professor at the Child Study Center at Yale University School of Medicine; Alison Singer, president of the Autism Science Foundation; David Amaral, director of research at the MIND Institute at the University of California, Davis; leading members of the research and advocacy organization Autism Speaks and many more.

To join the conversation, log into Twitter at the scheduled time and follow @SFARIorg and hashtag #IMFARchat. If you prefer more of a chat-room experience, you can also participate in the #IMFARchat discussion room found here.

Tomorrow night kicks off the 13th International Meeting for Autism Research (IMFAR), with an opening reception among beluga whales and bottlenose dolphins at the Georgia Aquarium in downtown Atlanta.

As far as autism meetings go, IMFAR is the biggest — this year it will host more than 1,500 experts from 40 countries. It’s also unique in that it brings basic researchers, clinicians and advocacy groups under one roof — key for a diverse and complex disorder such as autism.

This year’s agenda includes an early-career workshop, as well as daily ‘Meet the Experts’ luncheons for students and trainees — all part of the conference’s growing focus on young researchers. 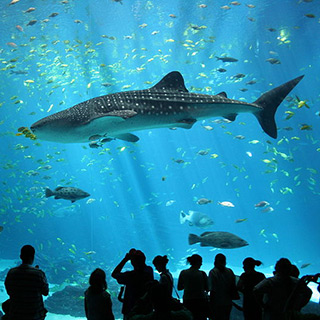 A buzzing metropolis and deep-fried cuisine replace the quaint seaside hills and bar pintxosof San Sebastián, Spain (home of last year’s IMFAR), as the conference returns to the U.S.

Atlanta makes sense as a host city for the conference. Apart from being a research hub, it is also home to one of three national Autism Centers of Excellence, a consortium of interdisciplinary laboratories focused on investigating the disorder.

Here on SFARI.org, you can expect regular breaking news coverage and analysis of noteworthy findings presented at the meeting. Keep up to date here.

And watch this space for daily reactions from speakers and attendees at the meeting. As we did last year, we’ll highlight a range of initial perspectives from the conference floor.

On Friday, we’ll host a live Twitter Q&A to reflect on some of the major themes and open questions that emerge during the meeting. The discussion will include, among others, Francesca Happé, president of the International Society for Autism Research.

The chat will take place at 2 p.m. Eastern on 16 May. Find us on Twitter at @SFARIorg and follow along using hashtag #IMFARchat. (I’ll post further details on other participants tomorrow.)