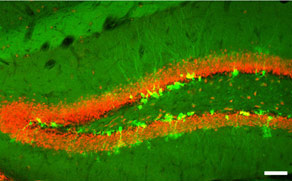 A drug in trials for treating autism-related disorders can reverse memory problems and anxiety in adult mice lacking the schizophrenia gene DISC1 in some cells. The unpublished results were presented yesterday at the Cell Symposia: Autism Spectrum Disorders: From Mechanisms to Therapies conference in Washington, D.C., a satellite meeting of the Society for Neuroscience annual meeting.

The drug, called rapamycin, reverses these behaviors even when the genetic glitch has caused permanent structural damage in neurons, according to lead investigator Alcino Silva, professor of behavioral neuroscience and psychology at the University of California, Los Angeles, who presented the work.

“Many of us believe that if there are structural deficits in place, unless you reverse them in some magical way, you are not going to get that much recovery,” Silva says. “That belief, which is widely held in our community, is probably wrong.”

The findings suggest that people with neurodevelopmental disorders, including autism, may benefit from treatments even in adulthood, Silva says.

Silva has long been interested in a biological pathway involving a central protein called mTOR, short for ‘mammalian target of rapamycin.’ The pathway features many genes tied to autism, including TSC1, TSC2, PTEN and MECP2.

In the new work, Silva’s team used an oncoretrovirus to disrupt DISC1 exclusively in newborn neurons in the hippocampus of adult mice. This region, important for learning and memory, is one of the few places in the adult brain where new neurons grow. Because the virus works for a short time, the technique affects only about 500 neurons.

Knocking out DISC1 from these cells causes dramatic abnormalities in the positioning and growth of neuronal branches, as another team reported in 20091. Silva repeated this work, and also measured the activity of the mTOR pathway and the behavior of the mutant animals.

As would be expected from DISC1’s known involvement in the pathway, the mutants have abnormal mTOR signaling, Silva’s team found.

Using a memory test in which a mouse interacts with two objects, the researchers also found that the mutants have significant difficulties with spatial learning.

In the test, if one of the objects is moved to a different part of the cage, control mice immediately go and inspect the object. The mutants, however, do not. “There’s a complete loss of memory due to these 500 abnormal neurons,” Silva says.

The mutant mice also show abnormally high levels of anxiety as measured by two other tests.

Rapamycin, a drug approved by the Food and Drug Administration as an immunosuppressant, reverses the structural defects and most of the abnormal behaviors if it is given shortly after the oncoretrovirus is injected, Silva says.

In a different experiment, the researchers injected the virus and waited 14 days, long enough for the structural problems in the neurons to become permanent.

Rapamycin treatment at 14 days does not ameliorate the morphological problems, but it does reverse the abnormal mTOR signaling, and the animals’ cognitive deficits and anxiety, the researchers found.

Although DISC1 is more relevant to schizophrenia than to autism, Silva sees many parallels between the two neurodevelopmental disorders.

There are a “vexing number” of interactions between DISC1 and other proteins in the mTOR pathway, Silva says, and that is likely to be the case for the growing list of autism candidate genes from that pathway. But this work suggests that narrowing in on a few interactions can lead to useful treatments.

“There’s this one clear message, which is a message of hope: that we may be able to intervene and do something about this,” Silva says.