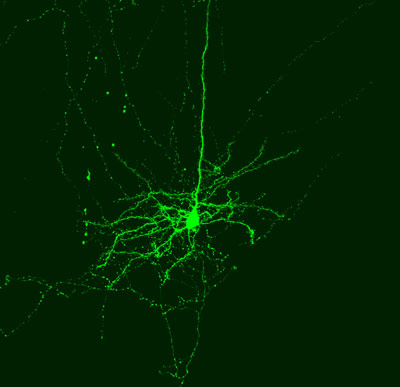 A new technique allows researchers to track the movement of a molecule along a single neuron’s projections. The technique, adapted for zebrafish, was presented Monday at the 2013 Society for Neuroscience annual meeting in San Diego.

A second study, presented Tuesday, described a robot that is able to reach deep into the brain and deliver material to a single neuron.

In the first study, the researchers adapted a technique originally developed for use in mice1. This method drew inspiration from viruses such as rabies, which can only travel in the retrograde direction — from the tip of a dendrite, or signal-receiving branch of a neuron, through the axon to the neuron’s cell body. The researchers instead use genetically engineered vesicular stomatitis virus (VSV), which can move in both directions along a neuron.

For this latest study, the researchers turned to zebrafish, a model gaining popularity among autism scientists. Zebrafish larvae are transparent, making their development easy to study with fluorescent markers.

In one experiment, the researchers injected VSV tagged with yellow fluorescent protein into a zebrafish’s eye. They recorded the virus’ journey from the axon to the neuron on the receiving side of the synapse, the gap between neurons.

“One neat thing you can do is look at different time points, because it takes time for a virus to go into a cell, amplify and then go into another cell,” says Yu-Chin Pan, assistant professor of neurology at Georgia Regents University. He worked on the study as a postdoctoral fellow in Alex Schier‘s lab at Harvard University.

The researchers also successfully mapped a retrograde circuit in the visual region of the zebrafish brain, and detected its function: The circuit glowed brightly in the zebrafish during a visual test.

“There’s a lot of autism candidate genes that we think might affect neural circuits, but we don’t know in which direction they affect their circuit — whether they increase connection or decrease connection,” he says.

It’s also relatively simple to generate mutations in zebrafish that mirror disorders in humans, he adds. “We can use this system as a way to probe how genes affect neuronal activity.”

In the second study, researchers described a robot that can inject genetic material into a single neuron in a live mouse. The technology uses an electrical field to increase the permeability of the cell membrane. When nanoholes on the membrane open, a probe delivers contents, such DNA or a drug, into the cell, says lead investigator Lu Li, senior scientist at the Allen Institute for Brain Science in Seattle, Washington.

Last year, the researchers showed that they can use the robot to measure a neuron’s electrical response and extract its genetic contents for analysis. The new method, which uses an updated version of the robot, allows them to genetically manipulate the neuron, inserting a gene of interest deep in the brain.

“In humans, cell therapy is still a long way away, but we can surely gain some insights when we can know the mechanisms of autism better,” Li says.