Pupillary reflex in infancy may yield clues to autism 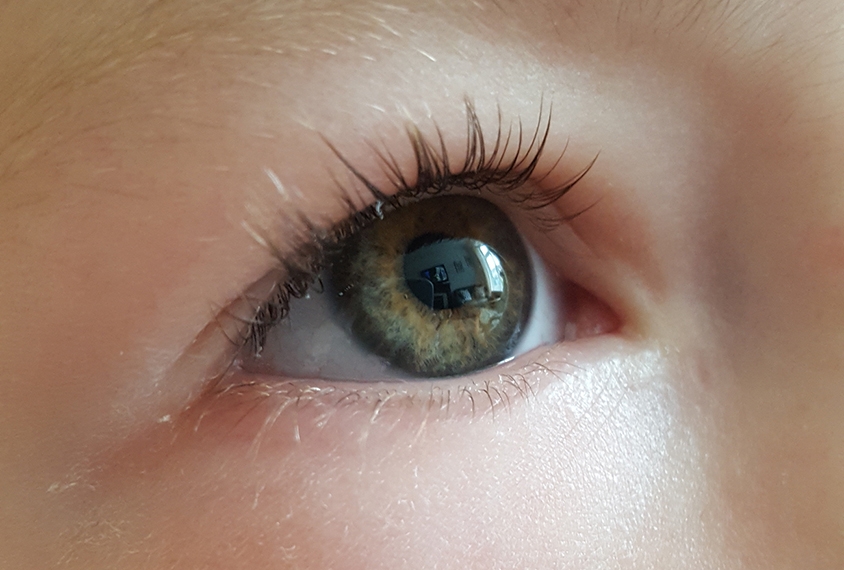 Flash light: Babies later diagnosed with autism constrict their pupils more than other babies do.

The pupils of babies later diagnosed with autism shrink more in response to light than those of their typical peers, according to a new study1.

“The fact that we find differences in the pupillary light reflex will narrow down the search for more specific mechanisms,” says lead investigator Terje Falck-Ytter, associate professor of psychology at Uppsala University in Sweden.

For example, the pupil’s response to light relies on a signaling molecule called acetylcholine. Studies of brain tissue from people with autism hint at unusual acetylcholine signaling2,3.

Several studies have revealed altered pupil responses in people with autism as young as 2 years old. The new study extends this line of research to the infant siblings of children with autism. These ‘baby sibs’ have about 20 times the average risk of autism.

In the new work, the degree of pupil constriction does not distinguish the individual infants who have autism from the ones who don’t. Only the average shrinkage in each group separates the two sets of children. But if these group-level differences are confirmed for individual children, the reflex might ultimately help predict an autism diagnosis.

“What’s great about the pupillary light reflex is that it’s a pretty easy thing to measure,” says Duje Tadin, professor of brain and cognitive sciences at the University of Rochester in New York, who was not involved in the work. The task that measures the reflex requires no instructions for the participant, so any child could take it, regardless of his cognitive abilities.

“Measuring something like a pupillary response, which is not particularly time-intensive, I think is exciting,” says Rebecca Jones, assistant professor of neuroscience in psychiatry at Weill Cornell Medicine in New York, who was not involved in the study.

Falck-Ytter and his colleagues analyzed eye-tracking data on pupillary reflexes in 147 baby sibs and 40 controls at 9 to 10 months of age. When the children were 3 years old, the researchers evaluated them for autism; 29 received an autism diagnosis.

BASIS researchers triggered the reflex by showing babies an animation on a white background that alternates with a black screen. Babies in the EASE study instead focused on a small circle on a black computer screen that momentarily changes to white.

Falck-Ytter and his colleagues calculated the average pupil constriction for three groups of children from each study: baby sibs with and without autism, and controls. They then adjusted the averages so they could combine the results from the two datasets.

They found that babies later diagnosed with autism constrict their pupils about 20 percent more, on average, than controls or baby sibs without autism.

However, on an individual level, all but one of the children with autism have pupil responses that are indistinguishable from those of controls.

“There is a large overlap between the groups,” Falck-Ytter says. “You cannot take the current test and believe that you will have a good prediction at the individual level.”

This finding strengthens the link between the altered pupil reflex and autism. “It’s not simply relating only to a categorical diagnosis, but also to the severity of symptoms,” Jones says.

Several teams have found that older children and adults with autism are slower than controls to constrict their pupils in response to flashes of light. But Falck-Ytter and his colleagues found no differences between the groups on this ‘latency’ measure.

“They didn’t find any difference in latency, which is the strongest measure in older kids, and that was a little bit surprising to me,” says Judith Miles, professor emerita of child health-genetics at the University of Missouri in Columbia. Miles was not involved in the new study but led some of the latency studies.

The speed of pupil constriction is linked to conditions other than autism, and generally slows with age, Miles notes. “Latency may be a much more general measure of how well the brain is doing.”

The next step is to see whether the new results hold up in baby sibs even earlier in infancy — those just a few weeks or months old. Falck-Ytter’s team is also exploring whether the pupillary measures, in combination with tests of other involuntary responses, can predict autism diagnosis.