Pupil response to light could be biomarker for autism 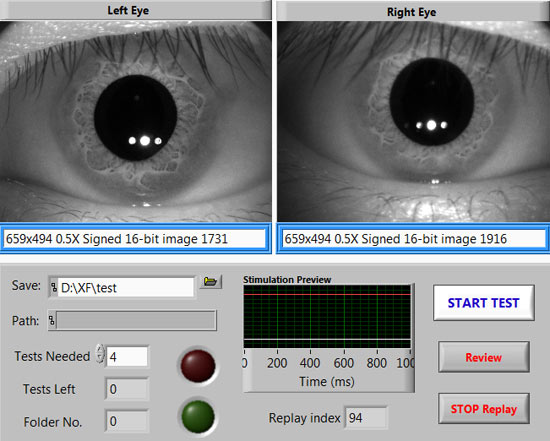 The eyes have it: Slower pupil responses could help identify people with autism with roughly 92 percent accuracy, the researchers say.

The pupils of children with autism contract more slowly in response to flashes of light than those of their healthy peers, according to findings published in the November issue of the Journal of Autism and Developmental Disorders1.

If the result is confirmed in larger groups of children with autism, visual reactions could serve as a potential biomarker for the disorder, researchers say.

“If this is part of the symptomatology, it means you should be able to use it as a measure for identifying kids who might be at risk for autism,” says John Colombo, a professor of psychology at the University of Kansas in Lawrence who was not involved with the study.

Pupil size and responsiveness have long been used as a test of lower brain function, but only a handful of studies published in the past 40 years have examined pupils in children with autism. Researchers first observed in 1961 that the pupils of five children with autism constricted more slowly when first exposed to a lighted room, compared with those of four healthy controls2.

Autism research then moved away from pupil reflexes because researchers had other ideas about the underpinnings of autism, primarily involving higher centers of the brain such as the cortex. In recent years, however, researchers have renewed their interest in lower-brain function in autism, Colombo notes.

In 2006, he and his colleagues observed that the pupils of children with autism constrict when they look at human faces, whereas those of both healthy and developmentally delayed controls widen3. His team also reported in March that pupils are generally larger in individuals with autism compared with controls4.

In the latest study, bioengineer Gang Yao and his colleagues at the University of Missouri in Columbia set out to test more refined measures of lower-brain function by asking whether the pupils of children with autism respond differently to flashes of light.

The scientists asked the children to first focus on a computer screen four feet away in order to capture the baseline pupil diameter, and compared it with the diameter after exposure to lights of two different brightnesses.

They measured pupil diameter and response time in each eye for 10 seconds after 100-millisecond exposures, using a customized pupillograph device — similar to those used by eye doctors to check vision — that Yao’s group created.

“We’ve got to figure out now what [this] means, and whether it’s specific to autism,” says collaborator Judith Miles, professor of pediatrics and pathology at the University of Missouri.

Based on their results, measurements in pupil reactivity may help researchers identify people with autism with roughly 92 percent accuracy, the researchers estimate. The team is planning to examine 100 additional children with autism.

“In order for it to be a really useful biomarker, [the study] will have to be done in large number of kids,” says Andrew Zimmerman, a pediatric neurologist at the Kennedy Krieger Institute in Baltimore.

Yao’s group also plans to investigate whether there is a connection between pupillary reflexes and other symptoms associated with the disorder, such as problems with digestion or sleep.

The new study uses only healthy children for comparison, but to hone in on the specificity of the light reflex, and to assess its true potential as a biomarker, it should be examined in different types of developmental disorders, such as fragile X syndrome and Rett syndrome, Zimmerman notes. “I would expect some overlap with other disorders,” he adds.

It will also be interesting to see whether differences in pupil reactivity are apparent in younger children, Zimmerman adds. That may require some behavioral training of toddlers, or an adaptation of the technology — such as incorporating the measuring device into a toy — to help them stay still during the test.