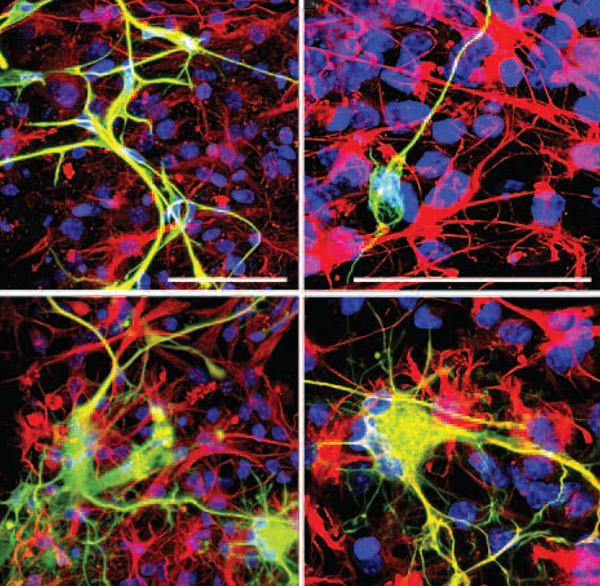 Superstars: Astrocytes (yellow) derived from people with Costello syndrome (bottom) are larger than those from controls (top).

Star-shaped brain cells called astrocytes weave a web of proteins that upsets brain development in the autism-like Costello syndrome. The findings, published 6 May in Science Translational Medicine, add to mounting evidence that brain cells other than neurons contribute to autism1.

“Astrocytes may play a very powerful role in directing the timing of brain circuit development, which is definitely altered in autism spectrum disorders,” says senior researcher Erik Ullian, associate professor of ophthalmology and physiology at the University of California, San Francisco.

The findings raise the intriguing possibility that drugs targeting astrocytes — or the protein nets they produce — can prevent symptoms of Costello syndrome and, perhaps, autism.

“In humans, astrocytes develop fairly late,” Ullian says. Drugs that target astrocytes before or soon after birth might help treat autism and other neurodevelopmental disorders, he says.

Individuals with Costello syndrome typically show intellectual deficits, developmental delays and skeletal and heart abnormalities. Roughly one in four of these individuals has autism. The syndrome belongs to a group of developmental disorders called RASopathies, which stem from mutations in a pathway that influences cell growth.

These mutations are known to alter how neuronal connections, or synapses, strengthen or weaken with experience2. But little was known about the mutations’ effects on astrocytes, which help support neurons and guide their development.

Ullian and his team reprogrammed skin cells from four people with the syndrome and three unaffected individuals to return them to an immature state, creating two sets of so-called induced pluripotent stem cells. They then coaxed the cultured cells into becoming astrocytes.

Astrocytes from the two groups behave differently in culture: Those derived from people with Costello syndrome mature faster and grow larger than those from unaffected individuals.

When cultured alongside rat neurons, the astrocytes from people with Costello syndrome secrete abnormally high levels of certain proteins. These proteins induce rat neurons to mature earlier than usual and sprout an unusually large number of synapses. The researchers determined that many of the secreted proteins make up ‘perineuronal nets,’ webs of proteins that surround neurons and help to stabilize their connections.

They then found that mice with a mutation in HRAS, a gene linked to Costello syndrome, make too many perineuronal nets in the cerebral cortex, the brain’s outer section, in their first two weeks of life. The nets close in on neurons earlier than they do in normal mice, suggesting that they interfere with the neurons’ growth and ability to form brain circuits.

Together, the results finger overgrown astrocytes and their protein webs in the pathology of Costello syndrome. The cells have also been implicated in Rett syndrome, another disorder linked to autism.

Drugs that target RAS, some of which are approved as cancer treatments, may affect these astrocytes and treat symptoms of Costello syndrome and autism. One such drug, called PD0325901, prevents the abnormal growth of other support cells for neurons called glial cells in a mouse model of neurofibromatosis type 1, another autism-linked RASopathy3. Unfortunately, trials of the drug in people with the disorder ended early because it causes eye damage4.

But other compounds of that class may prove useful for treating Costello syndrome and other RASopathies.

“There is already an armamentarium of drugs targeting the RAS pathway initially developed for cancer that could be used for treating patients with RASopathies,” says William Snider, director of the University of North Carolina Neuroscience Center Chapel Hill, who was not involved in the study. These drugs may also prove to be treatments for autism, he says.