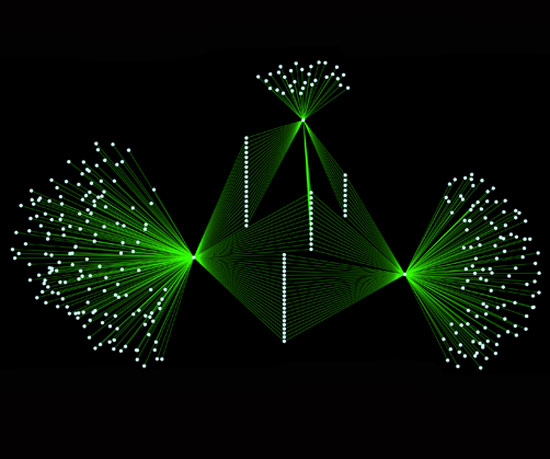 Researchers have identified hundreds of previously unknown connections between proteins involved in autism spectrum disorders, according to a report published last week in Science Translational Medicine1.

They uncovered these relationships while mapping the network of proteins linked to genetic syndromes associated with the disorder. These proteins interact with each other physically and often functionally, regulating and activating each other in cells.

Probing functional interactions between proteins is essential to understanding a disorder like autism that has multiple genetic causes, says lead investigator Huda Zoghbi, director of the Neurological Research Institute at Baylor College of Medicine in Houston.

“In this era when new autism risk genes are being discovered nearly every week, we thought it would be a good idea to start putting together a framework of functional data,” Zoghbi says. “In order to make a difference and develop treatments, we need to know what the protein does, what other proteins it talks to, and what are the downstream effects of those interactions.”

About 30 percent of autism cases occur in individuals with one of several genetic syndromes, including Rett and fragile X syndromes and tuberous sclerosis, and are referred to as ‘syndromic autism’. The genes implicated in these disorders were thought to be completely unrelated to each other.

In the new study, the researchers mapped the autism ‘interactome,’ a complex network of 539 proteins that interact with proteins associated with syndromic autism. They turned up provocative connections that point to common pathways perturbed in all these syndromes.

The most intriguing of these connections is one between SHANK3, deleted in Phelan-McDermid syndrome, and TSC1, mutations in which cause tuberous sclerosis.

SHANK3 and TSC1 interact with at least 21 shared protein partners at the synapse, the junction between neurons. Specifically, this group of proteins clusters at dendritic spines, neuronal branches that receive electrical signals.

A growing body of evidence suggests that autism is essentially a disorder of abnormal synapses — the junctions between neurons — leading to faulty connectivity between brain regions.

The researchers then searched for genetic mutations in 288 individuals who have idiopathic autism, meaning that it is unrelated to the known genetic syndromes. They uncovered three previously unknown copy number variations in genes that are part of the protein network associated with syndromic autism. Copy number variations are deletions or duplications of a genetic sequence.

“This elegant study provides the framework for identifying causes of idiopathic autism as well as defining the molecular pathways that may be shared between syndromic and idiopathic autism,” says Vijaya Ramesh, associate professor of neurology at Harvard Medical School. Ramesh, who works on TSC1, was not involved with the research.

The researchers focused on ataxia, a condition marked by loss of balance and coordination and often seen in neurodegenerative diseases. Like autism, inherited ataxias are caused by mutations in seemingly unrelated genes.

Zoghbi mapped the ataxia interactome using proteins involved in 23 inherited ataxias. The result helped uncover functional relationships between proteins disrupted in different forms of ataxia, says Marc Vidal, director of the Center for Cancer Systems Biology at Harvard Medical School. Vidal collaborated with Zoghbi on the ataxia project, but was not involved in the new study.

Researchers have begun to recognize that complex disorders are not just the result of faulty genes but also of skewed network interactions, Vidal says.

“Genes are not really the entities that mediate biological properties,” he says. “It’s really the products of the gene — mostly proteins, but also non-coding RNAs — but none of these identities acts alone.”

The first step in constructing an interactome involves choosing candidate proteins as ‘bait’. For the new study, Zoghbi focused on those linked to fragile X, Rett, Phelan-McDermid and other autism-associated syndromes.

The next step involves fishing for partners of those proteins by screening them against a library of all genes expressed in the brain. Proteins that interact with the bait are called ‘prey’ — but some of them will stick to almost anything, so the the researchers identified non-specific binding in a simple model system, in this case yeast. “Eventually, we come back to a mammalian cell and ask if the proteins actually bind to each other in the mammalian environment,” Zoghbi says.

The researchers checked to see if the protein partners are also expressed together in mouse brain tissue. “And some of the proteins we identified did exactly that,” says Zoghbi.

Based on this model, researchers can assess how mutations in a given gene affect others in the network, Zoghbi says. They can also investigate whether treatments that alleviate symptoms in one disorder — for example, fragile X syndrome — may be beneficial in other autism-related disorders. “You can take different drugs that are already in clinical trials and test them on a broader class of autism disorders.”

The study has also generated a number of testable hypotheses, Zoghbi says.

For example, TSC1 and TSC2 regulate mTOR, a protein that promotes protein synthesis in response to growth factors or stress. This process helps regulate neuronal connections and is disrupted in people with tuberous sclerosis.

“However, if this is not the case and SHANK3 interacts only with TSC1 independent of mTOR signaling,” she says, “that would be fascinating and may open up new avenues.”