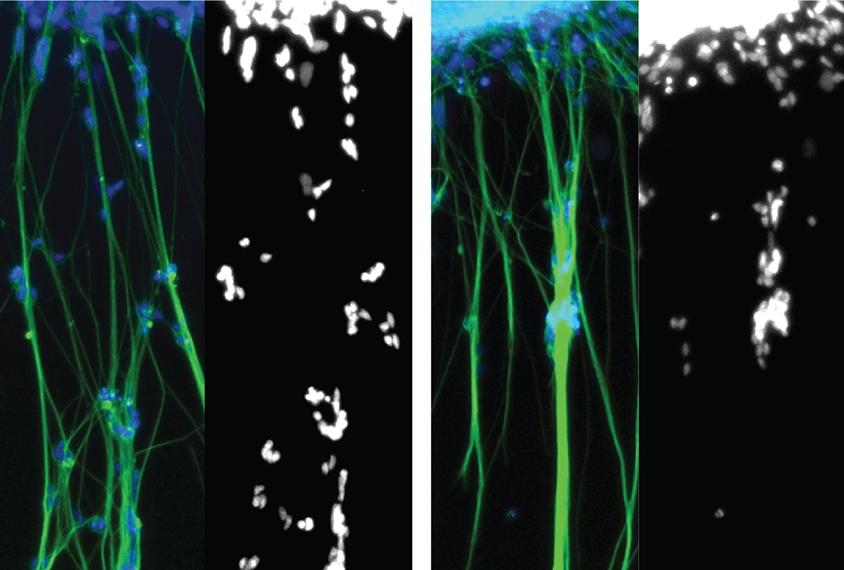 On the move: Neurons from one-month-old organoids with 16p11.2 deletions (right) migrate more slowly than those from control organoids (left).

The researchers created the organoids using reprogrammed cells from people carrying deletions or duplications of a 29-gene stretch of chromosome 16 called 16p11.2. Both variants are strongly associated with autism and differences in head size: People with deletions tend to have an atypically large head, or macrocephaly, and those with duplications have an atypically small one, or microcephaly.

Mice with 16p variants have not consistently shown head size differences, and so the organoids may be a better model for studying that trait, says Hongjun Song, professor of neuroscience at the University of Pennsylvania, who was not involved in the work.

“It’s really intriguing in the human system we can see that,” Song says. “That’s really a nice start. It highlights why, for human disorders, we really need to study humans.”

The organoids may help to reveal how 16p11.2 variants affect the earliest stages of brain development, researchers say. They may also eventually prove useful in identifying treatments, says lead investigator Lilia Iakoucheva, associate professor of psychiatry at the University of California, San Diego.

“Of course, the larger goal was to maybe find some druggable targets to help the children,” Iakoucheva says. “We thought that patient-derived model will be ideal and more beneficial than looking at the mouse.”

The researchers created a collection of brain organoids using skin-derived stem cells from three people with a deletion and macrocephaly, three with a duplication and microcephaly, and three controls. They measured the size of the organoids after 6 days, 16 days, 1 month and 3 months in culture.

At all stages of development, the deletion-derived organoids tended to be larger than control organoids, and the duplication-derived ones smaller, matching the head-size trends seen in people with the variants.

Sizing up: Organoids with 16p11.2 deletions (left) are larger than usual, whereas those with duplications are smaller (right), mimicking head size trends seen in people with those variants.

“It’s a very important direct connection to the patients’ phenotypes,” Iakoucheva says. “We were very excited when we saw that.”

The findings were published in Molecular Psychiatry last week.

The researchers also sequenced RNA from one-and three-month organoids and the stem cells from which they grew. Again, at all stages of development the mutated organoids differed from the control organoids in the expression of hundreds of genes; many of the affected genes facilitate the creation of neurons and their migration into the cortex early in development. Many also shared functions with other genes strongly linked to autism, such as CHD8.

Both deletion and duplication organoids had elevated levels of an enzyme called RhoA, which helps regulate neuronal migration. When the team placed neurons from the organoids in a dish, those with mutations tended to travel shorter distances than control neurons did. But that difference disappeared in neurons from organoids treated with a RhoA inhibitor.

The organoids may reveal more about overt features, such as overall size, than about neuron size or synapse density, nuanced traits that may be better suited to 2D models, Song says.

Similarly, he says, RNA sequencing in an animal model might be more informative, enabling researchers to do single-cell sequencing and understand which cell types are expressing which genes. (Iakoucheva says she hopes to do such sequencing in the organoids in the future.)

“This is really a great start of a model of the big phenotypes,” Song says.

Though the work is solid, researchers should be cautious not to over-interpret the results, says Verónica Martínez-Cerdeño, professor of pathology at the University of California, Davis. It’s unclear, for example, whether the differences in organoid size equate to the head size differences seen in people.

“This paper maybe gives us some candidate genes to study in the future, but how it’s really translating to autism, we just don’t know,” Martínez-Cerdeño says.

Still, the side-by-side comparison of the effects of deletions and duplications is helpful, says Sergiu Pasca, associate professor of psychiatry and behavioral sciences at Stanford University in California.

“This is particularly important in light of the opposing clinical phenotypes in patients,” Pasca says.

Iakoucheva’s team next plans to probe which cell types are disrupted by the changes in RhoA signaling, to analyze the organoids’ electrophysiological activity, and to evaluate whether the RhoA inhibitor affects the behavior of mice with 16p deletions or duplications.