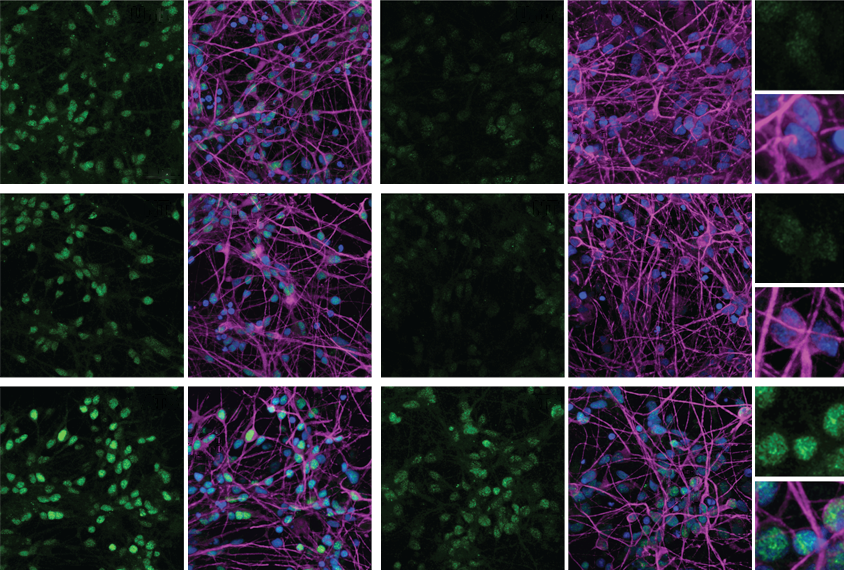 A new gene therapy for Angelman syndrome boosts expression of its target protein in the brains of wildtype monkeys, an effect that lasts up to three months and is accompanied by minimal side effects, according to an unpublished study posted to a preprint server.

Based on the success of the experiments, the team launched a clinical trial in late 2020 to see if children with Angelman syndrome can safely tolerate the treatment, says study investigator Thomas Kremer, principal scientist at the Switzerland-based drug company Roche, which developed the drug and is sponsoring the trial. The company reported at the Angelman Syndrome Foundation conference earlier this month that it has given injections of the treatment, called Rugonersen, to 50 people with the syndrome.

Angelman syndrome typically arises from deletions or mutations that destroy the copy of the UBE3A gene a child inherits from their mother. Because imprinting silences the paternal copy throughout the brain, children with a dysfunctional maternal copy cannot produce UBE3A protein, which is thought to lead to the syndrome’s characteristic traits: difficulty with communication and coordination, intellectual disability, seizures and autism.

There are no therapies for Angelman syndrome, but several drug companies have been designing short stretches of RNA called antisense oligonucleotides (ASOs) that can unsilence the paternal UBE3A gene and prompt protein production. The pharmaceutical companies Ultragenyx in Novato, California, and Ionis in Carlsbad, California, like Roche, also have ASOs in phase 1/2 clinical trials.

All ASOs in development use a different sequence of genetic code to unsilence paternal UBE3A, and it’s unclear if or how those differences may affect results.

Roche’s approach restored UBE3A protein in cultured neurons derived from people with Angelman syndrome, the new study shows. It also nearly doubled the amount of protein in wildtype monkeys — suggesting that “almost full activation of the paternal UBE3A allele has been achieved,” says Ype Elgersma, professor of neuroscience and head of the ENCORE expertise center at Erasmus University in Rotterdam, the Netherlands.

Elgersma was not involved in Roche’s study but says he and his colleagues approved ENCORE to run one of the company’s clinical trial sites after seeing preliminary data. “It looks incredibly hopeful to me,” he says.

The researchers designed approximately 2,500 ASO sequences with the potential to silence the ‘antisense’ RNA that typically blocks protein production from the paternal copy of UBE3A. From that set, they selected the one that produced the most protein with the fewest off-target effects when applied to cultured neurons generated from stem cells — from two people with Angelman syndrome, two neurotypical people and one wildtype cynomolgus monkey.

“It’s a really nice approach, because then you can assess safety, and to some extent, efficacy,” by testing the ASO in monkeys, says Mark Zylka, professor of cell biology and physiology at the University of North Carolina at Chapel Hill, who is not involved in the trials. “I think it serves as a real model for the field as to how to proceed with really any genetic therapy — be it for Angelman or for different forms of autism.”

Because the UBE3A antisense sequence is not conserved between mice and primates, the team also designed a ‘tool’ ASO to test the ASO’s effect in a model organism before moving to monkeys. The tool ASO targets a similar stretch along the antisense strand but uses a sequence that works for rodents.

UBE3A protein expression increased in Angelman syndrome model mice that received injections of the tool ASO in their brain, the team found. The tool needed to block approximately 90 percent of the UBE3A antisense to generate a 50 percent boost in protein levels.

Wildtype monkeys injected in the spinal cord with the ASO had up to a 95 percent decrease in UBE3A antisense function, depending on the brain region, the researchers also reported. Because the animals already have a functioning copy of the gene, some regions saw up to double the amount of UBE3A mRNA expression — the instructions for making UBE3A protein — and the amount of UBE3A protein.

“We were able to achieve this [increase] both for RNA and for the protein — that was why we were so excited about this data,” Kremer says.

He and his colleagues posted the findings on bioRxiv in June.

The amplification lasted for 85 days, the duration of the experiment, suggesting that a single dose of the drug could benefit recipients for multiple months, the team says.

And although it’s not yet clear how the increase in protein will translate to changes in the animals’ traits, past mouse studies may provide a clue, Elgersma says. “Our studies in an Angelman syndrome mouse model indicate that restoring UBE3A levels to 70 percent is sufficient to improve most phenotypes,” he says.

Although the drug produced no serious side effects, treated monkeys showed some lack of coordination for two to six hours at the highest dose tested. The ASO did not appear to be toxic to the animals’ liver or kidneys.

Ultragenyx’s clinical trial was temporarily halted in 2020 when all participants experienced leg weakness after receiving the highest dose of their treatment — suggesting that such effects might be inherent to high doses of ASOs in general, Zylka says. Studies such as Roche’s, using non-human primates, can help dial in the right dosage level, he says.

“It’s important work,” and it’s good to see the preclinical findings published, says Elizabeth Berry-Kravis, professor of pediatrics and neurological sciences at Rush University Medical Center in Chicago, Illinois. She is running clinical trials of all three companies’ ASOs, but was not involved in the Roche animal study.

But, she says, animal studies can only take you so far. “We’ll need human studies to know what the optimal dosing frequency will be.”

Another real test will come once the various ASOs in development reach phase 3 trials, says Stormy Chamberlain, senior principal scientist at Roche. “Nobody’s done a placebo-controlled study yet. So we really don’t know how well these work,” she says. “And we won’t know until those studies are done.”

No matter how encouraging the monkey results are, “you always have to be humble, because at the end, biology is so complex,” Kremer says. “A model is a model.”