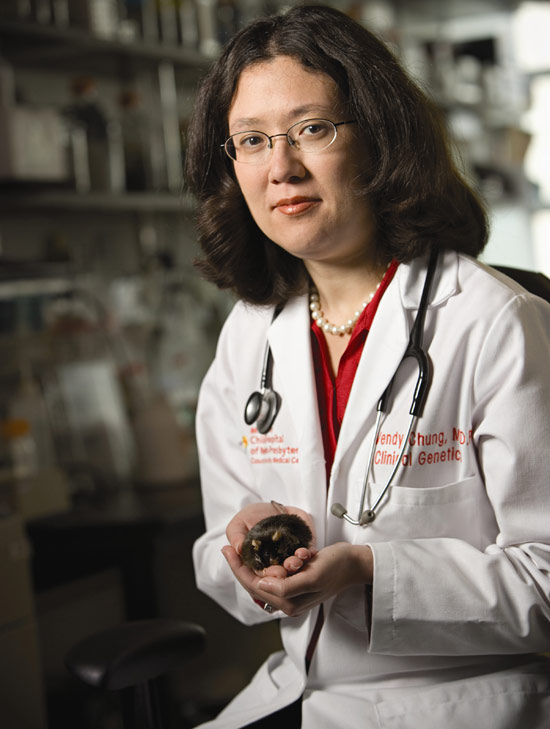 A few months ago, a young woman walked into Wendy Chung‘s office with a notebook and a flash drive. She said, “Here’s my medical history, here’s my genome, now you figure out what caused all this.”

This is exactly the kind of challenge that Chung relishes. A skilled genetic detective, she is adept at tracing an individual’s symptoms to a particular genetic anomaly, teasing out its molecular ramifications and identifying the associated syndrome.

According to those who know her well, that analytical bent is accompanied by a rare sensitivity.

“I’ve known a lot of brilliant doctors and though she’s at the top of the brilliance list, she also has a humanistic philosophy that animates everything she does,” says Hamilton Cain, the father of one of Chung’s patients. “She’s not only thinking on all cylinders, but also feeling on all cylinders. She really connects with patients and their stories and their lives.”

Chung, who began her research career studying diabetes and obesity, is director of the clinical genetics program at Columbia University Medical Center in New York as well as the university’s fellowship program in clinical and molecular genetics. Two years ago, she moved into the autism field, accepting an invitation to serve as the principal investigator of the Simons Variation in Individuals Project (VIP), launched by the Simons Foundation, SFARI.org’s parent organization. The project aims to identify and study individuals with an autism-associated deletion or duplication on chromosome 16p11.2.

Chung also teaches many core medical courses at Columbia. Her talent for teaching and mentorship has won her the prestigious Presidential Teaching Award and other prizes. She is what an earlier generation of researchers called “a triple threat” — skilled clinician, ambitious researcher and gifted teacher, says Rudolph Leibel, head of the division of molecular genetics in the department of pediatrics at Columbia University Medical Center.

“She’s certainly one of the brightest of her generation of physician-scientists,” says Leibel, who was Chung’s doctoral advisor at Rockefeller University in New York before both moved to Columbia. “In many ways, she is the poster child for physician-scientists.”

Chung began her career as a basic scientist. “I was a classic academic scientist: Lab-based, cloning genes, looking for very rare pathologies,” she says. “It was very abstract but it was what my mentor had done and what I thought a successful scientist should do.”

A family tragedy led her to change her plans. Very late in pregnancy, Chung miscarried for reasons that remain a medical mystery. Chung, who has two surviving sons, says, “As that kind of experience often does, it totally changed my life.”

She says she began to wonder what she would leave behind if she were to die the next day. “I realized that I would be very disappointed if, at the end of my life, all people would say is that I had published a certain number of papers,” she says. “I wanted to make sure that what I do is making a difference in patients’ lives.”

Her goal became making discoveries that would have a direct application to human disease. Leibel says he believes that transformation would have occurred in any event, although the tragedy may have sped it up.

Chung’s substantial gifts were evident early in her career, when she was a postdoctoral researcher working in his lab at Rockefeller University, Leibel recalls.

While working on her thesis project, for example, Chung made a discovery that would have slipped by many experienced researchers, he says. She noticed that one of the animals in a diabetes study had an unusual gait, and set out to determine whether a mutation in the colony had led to the peculiar trait. She did this on her own, taking videos of the animals and working them up carefully.

Ultimately, she cloned a gene from the animal that affects conductance in the heart and can lead to lethal arrhythmias. “That kind of thing has been repeated many times over in her career,” Leibel says. “She has a good sense of what is worth pursuing.”

At Columbia, Chung is involved in a broad range of research projects, investigating the genetic basis of diabetes, cardiac disorders, neuromuscular disease and neuropsychiatric disorders. She also sits on the advisory board of the master’s program in bioethics and has co-authored multiple papers with faculty in that program, exploring the ethical and social implications of genetic medicine.

“She is the go-to person for genetic issues at Columbia,” says pediatric cardiologist Teresa Lee, who was a fellow in Chung’s lab and still works there, researching genetic factors in cardiac disease. “She pretty much manages any patient in the hospital with a genetic disorder.”

As a mentor, Chung pushes her students as hard as she pushes herself, Lee says. A few years ago, her graduate students and postdocs hosted a dinner to celebrate Chung winning the Presidential Teaching Award. Each presented Chung with a book for her two sons that reflects lessons he or she had learned from Chung. Lee’s choice was The Little Engine That Could — “because she believed in me sometimes more than I believed in myself,” Lee says.

Chung builds equally strong relationships with her patients and their families. In fact, Cain, the father of one of her patients, is writing a nonfiction book about genetic medicine with Chung as the protagonist.

“She was a great advocate for us,” says Cain, whose son Owen, now 8 years old, was born with spinal muscular atrophy, a neuromuscular disease that is the most common genetic cause of death in infants.

The family endured months of agony and uncertainty until Chung diagnosed the disease just as Owen celebrated his first birthday. Chung’s support and advice meant a great deal to the family as they navigated the complex details of his treatment, Cain says. “It really empowered us to make the right decisions for our son.”

Genetic medicine can pose difficult questions for both clinicians and parents. For example, deletions and duplications in the 16p11.2 region almost always produce some symptoms of autism, but only about 30 percent of individuals with a deletion warrant a diagnosis.

The Simons VIP study aims to understand the full spectrum of the 16p11.2 phenotype, or collection of traits. Until it does, however, it is tricky to advise parents on whether to opt for prenatal tests for the region and other less well-characterized genetic anomalies.

“One way of thinking about this is people can make their own decision,” Chung says. “On the other hand, I can tell you the flip side, the patients who got the intensive arrays and say afterwards, ‘Boy, I really regret making this decision.'”

Still, whenever there is a question about sharing information with families, Chung invariably comes down on the side of patient autonomy, says Christa Lese Martin, director of the genetics laboratory at Emory University in Atlanta, and a co-investigator on the Simons VIP. “She’s always got the family’s needs in mind.”

Leibel adds that Chung also serves as a sounding board for physicians wrestling with such difficult issues at Columbia.

“She’s not talking about theoretical constructs,” he says. “She’s lived them herself, in terms of losing a child for reasons that still remain unknown. I think that’s one of the reasons she’s so sensitive on these points and so effective.”