Uta and Chris Frith: A partnership of the mind 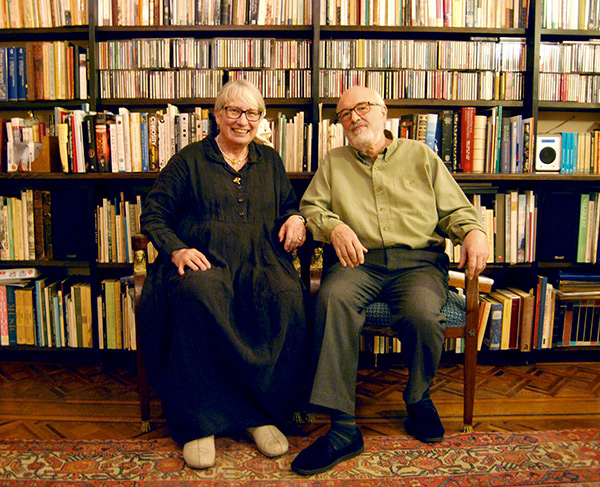 Social minds: Uta and Chris Frith are now retired, but continue to engage the research community via Twitter and blogs.

Autism can be baffling, appearing in various forms and guises and thwarting our best attempts to understand the minds of people affected by it. Anything we know for sure about the disorder can probably be traced back to the pioneering research of the developmental psychologist Uta Frith.

Frith was the first to propose that people with autism lack theory of mind, the ability to attribute beliefs, intentions and desires to others. She also recognized the superior perceptual abilities of many with the disorder — and their tendency to be unable to see the forest for the trees. Frith, now affiliated with the Institute of Cognitive Neuroscience at University College London (UCL), has shaped autism research for an entire generation of investigators.

Meanwhile, her husband Chris Frith formulated a new view of schizophrenia, a mental illness marked by hallucinations, disordered thinking and apathy. His work explored how the disorder affects the experience of agency, the sense that we are in control of our bodies and responsible for our actions. And his innovations in brain imaging helped researchers examine the relationship between brain and mind.

Independently, husband and wife explored the social and cognitive aspects of these psychiatric disorders. Together, they helped lay the foundations of cognitive neuroscience, the discipline that seeks to understand the biological basis of thought processes.

“Uta and Chris are generally regarded as the matriarch and the patriarch of cognitive neuroscience,” says Karl Friston, professor of neuroscience at the Wellcome Trust Centre for Neuroimaging in London, and an occasional collaborator. “They’ve had a profound effect in terms of intellectual content, but they’ve also enabled, encouraged and nurtured many others along the way.”

The couple first met in 1965, when the young Uta Aurnhammer moved to London after graduating from the University of Saarbrücken in Germany. Uta was drawn to psychology by the work of Hans Eysenck, whose ideas about intelligence and personality were highly influential. “He was kind of a hero of mine,” she says, “because his books debunked psychoanalysis and described new behavioral therapies for psychological disorders.”

She took an internship at the Institute of Psychiatry in London, where Eysenck worked, and met Chris Frith in a course on clinical psychology. “It was just a meeting of minds,” Uta recalls. “We seemed to have the same taste in art, poetry, film, literature and music.” Both also felt that abnormal psychology could reveal much about the human mind.

They married the following year, and both stayed on at the Institute of Psychiatry. Uta had met children with autism, or ‘childhood psychosis’ as it was then known, during her training. When Eysenck proved to be elusive and uninspiring, she decided to make the condition the subject of her thesis. “People with autism can be excellent at some things and very poor in others, and this variation fascinated me,” she says.

At the time, autism was still thought to be caused by cold, uncaring parenting, but a series of twin studies carried out by the developmental psychologist Michael Rutter in the early 1970s revealed the genetic basis of the condition1. Encouraged, she pursued her hunch that autism has a biological basis.

“Uta and Chris are generally regarded as the matriarch and the patriarch of cognitive neuroscience.”

She studied language and visual processing in children with autism, finding that they have excellent perception of fine details, but fail to grasp the gist of a scene or sentence2,3.  She would later formalize this observation as the ‘weak central coherence theory,’ the idea that people with autism have difficulties consolidating streams of information.

After she finished her Ph.D., her advisor Neil O’Connor hired Uta at the Medical Research Council Developmental Psychology Unit in central London — “my absolute dream job,” she says. She remained there for the rest of her career, cultivating many graduate students and making a string of discoveries about social impairments in children with autism.

In the mid-1980s, she developed the Sally-Ann test with her student Simon Baron-Cohen, now professor of developmental psychopathology at the University of Cambridge4. The test uses puppets to measure children’s capacity to understand that others have beliefs that might be different from their own. Together, Uta and Baron-Cohen showed that children with autism lack theory of mind, and hypothesized that this was at the root of their social impairments — an idea that guides the field to this day.

From the beginning, Chris was interested in schizophrenia. “I had met some patients while working in these huge, old-fashioned south London asylums, and became fascinated by how seemingly intelligent people could have such bizarre ideas,” he says.

His early work transformed the view of this mental illness. The cognitive processes underlying its symptoms were poorly understood, until his studies revealed that people with schizophrenia sometimes have poor awareness of their own actions and thoughts5. This is why they misattribute their own actions to external sources, and mistake hallucinations as originating from the outside world.

By the early 1990s, Chris had moved to the Medical Research Council Cyclotron Unit at Hammersmith Hospital in London. He used neuroimaging methods such as positron emission tomography to investigate the neural basis of mental processes and schizophrenic symptoms. “Chris did the very first sophisticated cognitive experiments using noninvasive brain imaging with humans,” says Friston.

In 1992, the Friths’ lines of research began converging. The insight that both schizophrenia and autism involve social difficulties led the two to suggest that the brain has a dedicated system devoted to social cognition that malfunctions differently in each disorder. In 1999, they co-authored a paper proposing to identify a biological basis for social interactions. In so doing, they established social cognitive neuroscience as a discipline in its own right6.

The Friths have both received countless awards for their work. This year, the two were jointly recognized with the Jean Nicod Prize, awarded to a leading philosopher of mind or cognitive scientist. Both have been elected to the Fellowship of the Royal Society, and last year Uta was made an honorary Dame of the British Empire. Both are now retired, but continue to pursue research with emeritus positions at UCL.

Although autism was thought to be rare when she began her career, Uta is now concerned that it might be overdiagnosed, because the current diagnostic criteria are so broad.

“There was a time when autism was underdiagnosed and we wanted to raise awareness of it,” she says. “But people with autism-like behaviors are now diagnosing themselves incorrectly, and I’m worried about over-extension of the diagnosis.”

Chris continues to explore the interactions of minds, studying how people follow instructions and exploring thought insertion, a symptom of schizophrenia in which people believe that their thoughts are put in their minds by somebody else.

Uta has been a fierce advocate for women in science and technology, and both Friths have had a lasting influence on the careers of dozens of other scientists, many of whom are now regarded as experts in their own fields.

Sarah-Jayne Blakemore, professor of cognitive neuroscience at UCL, studied for her Ph.D. with Chris as one of her advisors. “He always gave me brilliant advice which I still adhere to,” says Blakemore. “I also became friends with Uta, who immediately became a mentor, and with her encouragement I became independent quite early in my career.”

The Friths’ advice extended beyond intellectual life, says Blakemore. “Even today, when I find myself in a difficult situation, I often find myself thinking, ‘What would Chris do?’”

Sociable people, both Chris and Uta document their ongoing research through social media such as Twitter and blogs. “Their own social brains are also highly developed,” quips Robbins. “They wear their preeminence lightly and with a sense of humor, adding to their popularity as role models, mentors, icons and sages for young scientists worldwide.”