Tim Roberts: Sounding out a signature for autism 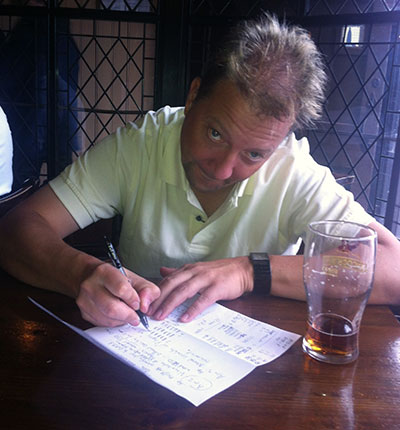 Pub MEG: Lightning doesn’t always strike at the lab. Tim Roberts composed some of his best theories over cold pints of beer.

It’s about 10 a.m. on a warm August day and Tim Roberts is already in full-throttle public-speaking mode. His shock of blond hair — and the espresso he immediately brews in his desk-side machine — only heighten the intensity he radiates.

Roberts is a gifted speaker, and a reflexive educator, whether breaking down medical concepts to a group of physicists, clinicians, grade-school children or a visiting reporter. He’s also warm and funny, with a disarming British wit employed chiefly to poke fun at himself.

He needs this energetic persona to tackle his ambitious list of projects. At the Children’s Hospital of Philadelphia, where he is vice chair of pediatric radiology, his work knits together physics, neurology, computing, autism, epilepsy and linguistics. He is integrating these disparate fields to try to unravel the neurological basis of hitches in language processing, a hallmark of autism.

The goal, he says, is to identify a telltale signature, or biomarker, for autism, which would help doctors spot and treat the disorder early1, 2.

“This biomarker work is leading us toward not really personalized, but stratified therapies,” Roberts says. By that, he means that biomarkers might help identify subtypes of autism with various biological origins, which might each call for a different treatment approach.

This sort of multimodal thinking is rare among scientists, notes Howard Rowley,professor of radiology, neurology and neurosurgery at the University of Wisconsin, Madison and Roberts’ longtime collaborator and friend.

“[Roberts] is a translational medical practitioner, a scientist who helps bring ideas into practice,” says Rowley. “That’s his signature; that’s his gift, where he has impact and will have a lasting impact.”

For his work on autism, Roberts relies on novel and retooled magnetic encephalography (MEG) and magnetic resonance imaging (MRI) machines. While MRI gives a snapshot of brain structures using radio-wave pulses and a magnetic field, MEG captures the electrical activity of neurons by measuring the magnetic fields they produce over time, on the order of tens of milliseconds.

In 1999, Roberts and his team used MEG to show for the first time that the brains of children with autism lag behind those of their peers in response to tones they hear3. Later, they quantified this delay for vowel sounds to about 50 milliseconds. A delay in processing one vowel sound could interfere with the next, piling up like train cars to derail a whole sentence.

“With MRI, there are various software packages for analysis and for delivering stimuli — it’s in some ways more turnkey. But for MEG, you really have to know how the machines work and the physics in order to get the results,” says Ted Abel, professor of biology at the University of Pennsylvania. “What’s impressive to me about Tim is his energy for it all.”

In the past few years, Roberts and his collaborator Steven Siegel havedocumented this same kind of hearing glitch in several animal models of autism4.

Siegel, a self-described “schizophrenia guy,” says Roberts was a gracious and enthusiastic tutor of autism. “He is a bridge to the other communities, and he brought my lab and division to autism,” Siegel says.

Roberts’ attention to detail is apparent in the rooms he has set up for his experiments. For example, two of the lab’s three extraordinarily sensitive MEG instruments are in what he calls “the quietest room in the hospital,” a custom-built fortress against wayward magnetic signals.

“The point is, we’ve got all this super technology, but it’s worthless if we can’t get the child to go anywhere near it.”

The room is entirely encased in sheets of aluminum sandwiched between two layers of Mu-metal, a nickel-iron alloy that attracts and captures magnetism. “We planned for this seven years ago,” says Roberts. “This is the largest magnetically shielded room, I believe, on the planet.”

If they weren’t in this shielded environment, the instruments could capture a magnetic signal several miles away. Even within the room, the sensors can pick up the magnetic signal of a mother’s beating heart if she hovers too close to her child in the scanner.

And yet, it looks much like a child’s bedroom, with cameras hidden beneath friendly sea creatures, wires concealed in the floor and cables nested inside cabinets cleverly disguised as a chest of drawers. A plush frog holds ‘MEG dollars’ in its mouth, premiums for the children’s cooperation in putting on their pajamas or lying quietly in the machine. Even the two MEG instruments are entirely encased in curving white plastic that gives one the look of a giant cartoon microscope and the other a sort of small clown car.

“The point is, we’ve got all this super technology, but it’s all worthless if we can’t get the child to go anywhere near it,” says Roberts.

The book that prepares children for the study introduces the two machines as “Max the MEG and his little brother.” But inside ‘Max’ are 275 magnetic field detectors, arrayed on the inside of a small dome that fits the heads of 97 percent of people.

The heads of children aged 3 or younger are generally too small for these machines, so most labs scan only older children. But Roberts was insistent that the lab acquire a baby MEG, so that the team could study the brains of children at just the age when language is seeding in the brain.

Three years in the making and custom-built by a firm in San Diego in close consultation with Roberts, the baby MEG has 123 detectors squeezed into its smaller helmet. “It’s North America’s first and, one could argue, the world’s first dedicated infant MEG scanner,” Roberts says.

Roberts’ first full exposure to imaging equipment was a far cry from the fortress of quietude he has set up. As an undergraduate at Cambridge University in the U.K., he had managed to spice up his restrictive schedule of mathematics, physics and chemistry with courses in cell biology, an unheard-of addition.

But Roberts found himself underwhelmed by his choices for an undergraduate research project, a roster heavily weighted with diode or liquid crystal experiments. “That list of projects, I’m not going to say it’s on stone tablets, but it’s pretty old,” he recalls.

And again in graduate school, only one project that seemed novel and had a biological element intrigued him: Laurance D. Hall, professor of medicinal chemistry at the university, had amassed a graveyard of dead machines, which his lab was supposed to fix and improve. The students worked alongside medicinal chemists in a lab housed in the school of clinical medicine, applying principles of physics and engineering to MRI scanners.

“This is the birth of Tim: the multimodal, interdisciplinary, not-quite-fitting-in-anywhere scientist,” Roberts says.

Roberts eventually went to the University of California, San Francisco to work as a postdoctoral fellow in the lab of Michael Moseley, now at Stanford University and an MRI pioneer. Roberts then got a chance to work on MEG when the department got a loaner machine to evaluate its applicability for clinical research.

This was in the early 1990s, when no one knew much about MEG’s capabilities, and Roberts and Rowley — who first met at that time — lurched from one project to another, at one point attempting presurgical mapping of tumors with MEG and at another trying to trace the origin of nausea in the brain. The latter involved their donning prism glasses from the National Aeronautics and Space Administration, spinning in a chair and getting violently ill. (They decided they had had enough of this line of inquiry after one publication.)

Over large amounts of sushi and sometimes copious quantities of beer, Rowley came up with clinical questions and Roberts generated ideas for solving them using MEG, MRI or other imaging tools.

“[Roberts] is exceptionally brilliant,” Rowley says. “He’s able to keep all that in his mind and make the kind of connections that others simply can’t make.”

Not long after that, Roberts became interested in the neural correlates of language5. His work on the brain’s response to pitch caught the attention of Eric London, founder of an autism advocacy group. Cruising by Roberts’ poster at a Society for Neuroscience meeting in the late 1990s, London asked Roberts, “How much do you know about autism?” Roberts recalls, and told him to apply for a grant.

Roberts immediately saw this would be a way to make his research useful, using a superbly sensitive technology to investigate a key feature of a disorder. “It was turning autism on its head,” says Roberts. “Instead of going to the behavioral endpoint of autism — the result — the clinical exam tells you all the things that are going wrong [in the brain].”

Since then, Roberts hasn’t stopped moving, combining that intense energy with compassion for patients and a lecture schedule that takes him all around the country. “If I were not a scientist,” he says, “I would write books on how to navigate airports and frequent-flyer programs.”