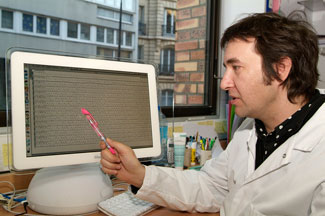 New explorations: Thomas Bourgeron has pushed his research into areas that he hopes will more directly affect people with autism.

Nearly ten years ago, Thomas Bourgeron struck genetic gold. Scouring the X chromosome for clues to autism, the French scientist identified two mutations in genes called neuroligins, in two pairs of Swedish brothers with the disorder1. These genes are essential for proper function of the synapse, the connection between neurons.

The study, published in Nature Genetics, garnered little attention at the time. But it was the first to link a rare mutation in a single gene with common forms of autism, and would ultimately change the face of autism research.

“[Bourgeron’s] early work was the harbinger of an entire wave of rare-variant discovery that came after,” says Matthew State, co-director of the Yale Program on Neurogenetics. “I don’t think there is anyone who had more a significant impact as an individual on where the field is.”

In the past few years, Bourgeron has expanded his interest beyond traditional genetics to explore research that he hopes will have a more direct impact on people with the disorder. One major focus is the role of sleep in autism, which is a huge issue for families.

Although sleep is not considered one of the core symptoms of autism, Bourgeron says he believes studying it will bring important insight into the disorder. His career has in large part focused on what causes autism. “But a second question, which is very important, is what can biology do for people with autism?” he says. “It’s not the same question.”

Bourgeron, who is director of the Human Genetics and Cognitive Functions Unit at the Institut Pasteur in Paris, started his scientific career comically far from the brain.

As a plant biologist studying potatoes, he spent hours peeling the vegetables in search of enzymes involved in metabolism. But faced with little funding for plant biology, he began a doctoral program at Necker Hospital in Paris, studying mitochondrial disorders.

During his graduate work, Bourgeron surprised the mitochondria community by finding the first human mutation in the Krebs cycle — a series of chemical reactions that serves as the cell’s main source of energy2.

Before his discovery, a full seven years before the publication of the human genome, researchers had thought the Krebs cycle is too vital to the cell to harbor mutations. (By a strange coincidence, the mutation was in the same gene he had studied in potatoes.)

After finishing his Ph.D., Bourgeron took a job in a lab at the Institut Pasteur, studying sex determination and male infertility. He says he chose it because his other job options required that he know how to drive, a skill the native Parisian had never acquired.

During his exploration of infertility, Bourgeron stumbled onto a gene on chromosome 6 that had previously been linked to schizophrenia. Though he didn’t know it at the time, that 2001 discovery turned out to be his first foray into autism3. The gene, now called FAM8A1, popped up as an autism risk gene earlier this year in exome sequencing studies led by State4.

Inspired by that chance encounter with the world of psychiatric disorders, Bourgeron decided to study the genetics of autism.

His first target was the neuroligin family of genes, first discovered in rats5. Several years earlier, researchers in the U.K. had found three women with autism all harboring small deletions of the same region on the X chromosome6.

Bourgeron’s small lab at the time — just a graduate student and a technician — screened more than 100 families with a child who has autism for mutations in the two neuroligins. The families were part of the Paris Autism Research International Sibpair Study9, an international collaboration of clinicians studying families with a history of autism.

The researchers identified mutations in NLGN3 and NLGN4 in affected siblings from two Swedish families. The error in NLGN3 changed an amino acid in the protein, and the mutation in NLGN4 stopped its production. The mutations were absent in hundreds of controls.

“At the time, it was just a couple of subjects with the condition, but it turned out to be a part of a really important class of genes,” says Susan Folstein, a psychiatrist at the University of Miami Health System. Folstein got to know Bourgeron when she organized a series of conferences that later evolved into the Autism Genome Project.

In the past few years, it’s become clear that rare mutations with large effect play a role in autism. Studies now predict that hundreds of genes are likely to contribute to autism. A significant number of these genes are tied to the synapse, a convergence that provides hope for both scientists and pharmaceutical companies.

But in 2003, the popular theory was that a combination of common mutations, each with weak effect, lead to the disorder.

“It was a very creative approach at that time, to think these genes might be involved and to test for them in many families and hit gold,” says Thomas Südhof, professor of molecular and cellular physiology at Stanford University in California. “In hindsight, it sounds as though it should be obvious, but whenever you do something new that turns out to be productive, it often seems obvious.”

In addition to finding the first single-gene mutations linked to classic autism, Bourgeron pointed to the synapse as a site of autism’s pathology. Four years later, his team identified mutations in another synaptic protein, SHANK3, which binds to neuroligins10.

About five years ago, Bourgeron received a phone call that he says changed his life. He had met the mother of a 23-year-old man with autism at a student’s Ph.D. thesis review. The mother called Bourgeron after learning that her son carries a mutation in SHANK3 that Bourgeron had linked to autism.

“I told her what little we knew about the protein at the time,” Bourgeron recalls. But there wasn’t much that would be useful for a struggling parent.

The mother said she had worked intensively with her child when he was young. “If I knew at that time he had a genetic mutation, I would not have fought like this, because I don’t think I could have fought the genome,” Bourgeron remembers her saying.

Her remark triggered a philosophical change in how Bourgeron viewed his work. In search of practical applications for his research, he turned to sleep. “It’s a huge problem for people with autism,” he says. Studying these sorts of symptoms may also shed light on the genetics of the disorder.

Once again, Bourgeron has chosen to buck scientific trends. He is studying the hormone melatonin, a once-fashionable molecule that is neglected by most pharmaceutical companies.

A number of clinical studies have shown that melatonin can help manage sleep disorders in people with autism. Bourgeron’s team has confirmed that some people with autism have low melatonin levels and found that this is linked to dampened activity of an enzyme needed for melatonin synthesis11.

“If [Bourgeron] thinks something is interesting, you’ve got to pay attention,” says State. “As many families with an autistic kid will tell you, sleep patterns and arousal are all really relevant.”

In the meantime, Bourgeron’s team is continuing to focus on the synapse, an approach that’s supported by the outcome of recent clinical trials. Researchers showed in September that a drug that targets the synapse improves social deficits in people with fragile X syndrome, an inherited disorder linked to autism.

Bourgeron and his collaborators are sequencing the whole genomes of 15 families with multiple members who have autism. Apart from harmful mutations, Bourgeron says, he also hopes to find factors that protect from autism.

The synapse may be buffered to a certain extent such that it will only malfunction if more than one of its components is faulty, Bourgeron says. This would explain why some people with mutations in synapse genes don’t have autism.

Figuring out how to mimic such protective mechanisms with drugs would provide another approach to drug development. “I think nature can cope with a lot of mutation,” he says. “We just have to help it along.”