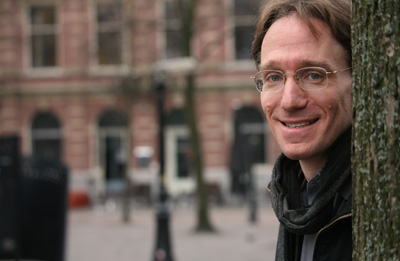 P. Strating Strokes of luck: Simon Fisher, an expert on the genetics of language, attributes his success to good collaborations and a bit of serendipity.

As a graduate student in genetics in the mid-1990s, Simon Fisher spent his working hours painstakingly trying to decode the DNA sequence of a piece of the X chromosome. Outside of the lab, though, he was fascinated by a far less tractable question: How does the human brain learn language?

Fisher still remembers poring over The Language Instinct, the 1994 bestseller by linguist Steven Pinker. One chapter describes the ‘K family’ of London, three generations of relatives made famous in 1990 for their problems in forming plural words and recognizing tenses. The large number of relatives with these specific grammatical difficulties, according to Pinker, suggested the existence of “grammar genes.”

Fisher, a young gene hunter, was captivated by the story. “I remember saying to my girlfriend at the time, who’s now my wife, ‘God, it’d be amazing to get your hands on this kind of family,’” Fisher recalls.

Two years later, Fisher took a postdoctoral position in the Oxford University lab of Anthony Monaco, who was screening DNA from families that included one or two members with autism. Fisher’s job was to start screening the DNA in similar families, except with a history of dyslexia or specific language impairment (SLI). The latter is a disorder characterized by language problems without any other physical or cognitive disability.

Just a few weeks after Fisher arrived, Monaco asked him offhandedly if he was interested in analyzing DNA samples from a large London family with SLI. Fisher looked at the pedigree, labeled ‘KE family,’ and recognized it immediately. “I said, ‘I’ll do it, I’ll do it,’” Fisher recalls, laughing. “It was almost like I was primed to do this. It completely fell in my lap.”

In 2001, Fisher and his team reported in Nature the gene responsible for the famous family’s language quirks: FOXP2, a ‘master switch’ that controls the expression of other genes1, including some linked to autism. He’s been digging into FOXP2’s biology ever since.

It turns out that the KE family’s language problems aren’t fundamentally based on grammar, as Pinker suggested, but rather are due to trouble coordinating movements of the throat and tongue. Fisher’s studies have found that mice lacking FOXP2 have similar defects in motor learning. He has also shown in cultured neurons that FOXP2 regulates hundreds of genes, many of which are involved in brain development, autism and other psychiatric disorders.

In 2010, Fisher, then 40, founded Language and Genetics — the only such department in the world — at the Max Planck Institute for Psycholinguistics in Nijmegen, the Netherlands. Though he is a geneticist, his new position requires that he straddle a broad range of subjects, from genetic associations and mouse engineering to linguistic theories and comparative evolution. And that mix suits him quite well.

As early as high school, Fisher wanted to merge his interests in science and language. But his teachers advised him to specialize. He studied natural sciences at Cambridge University in the U.K. and in 1991 moved to Oxford for graduate school.

He worked in Ian Craig‘s lab, which was part of the Human Genome Project, an international effort in which dozens of labs across the world together sequenced the genome. Craig’s lab was focused on finding disease genes in particular sections of the X chromosome.

“I was a gene mapper. All I ever really wanted to do was find a gene,” Fisher says. And soon he did, pinpointing a gene on the X chromosome that causes a rare kidney stone disease2.

When Fisher began his project on the KE family in 1996, quick-and-dirty genome sequencing did not yet exist. He used another strategy, known as linkage scanning, which compares gene markers in affected and unaffected members of the same family to identify the approximate genomic neighborhood of the culprit gene.

In DNA from affected members of the KE family, he found a strong linkage signal in chromosome 7. “It was the most convincing piece of data that I’ve seen,” Fisher says. The trouble was, the signal encompassed a large region — around 100 genes, any one of which could have been the culprit.

Figuring out which one of those genes was responsible might have taken many years if not for a serendipitous phone call from Jane Hurst, a clinical geneticist who first described the KE family3. Soon after Fisher reported on the chromosome 7 linkage, Hurst called him to tell him about a 5-year-old boy with a speech defect who had come into her clinic. “She said, ‘He just really reminds me of the KE kids,'” Fisher recalls.

The boy carries a genetic glitch that effectively broke his chromosome 7 into two parts. Working with Cecilia Lai, a graduate student, Fisher discovered that the boy’s breakpoint was smack in the middle of FOXP2.

The popular press trumpeted the newly discovered FOXP2 as the first “gene for language,” which Fisher says irked him. “It’s not this magical, mythical thing,” he says. “But it’s still a really exciting piece of biology.”

Researchers worldwide jumped on the discovery. For example, evolutionary biologist Svante Pääbo of the Max Planck Institute for Evolutionary Anthropology in Leipzig, Germany, teamed up with Fisher to show differences in the sequence of FOXP2 in humans and chimpanzees4. Language researchers such as Stephanie White at the University of California, Los Angeles took note, too. White, who uses songbirds to study how social interactions affect vocal learning, has since found that when an adult bird sings, FOXP2 protein levels cycle up and down in its brain.

FOXP2’s discovery proved to be especially important for autism research — though no one would have guessed it a decade ago. In 2002, the same year Fisher launched his lab at Oxford, he and Monaco reported that they had not found any link between FOXP2 variants and autism in 169 families with the disorder5. Fisher then moved on to other projects.

One of his very first screens turned up CNTNAP2. The gene is located in a chromosomal region that Daniel Geschwind and others linked to autism and language delay. Later, Fisher collaborated with Geschwind and found that FOXP2 dials down the expression of CNTNAP2, and that some individuals with SLI carry CNTNAP2 variants6.

FOXP2 turns out to have several other interesting targets, including the autism risk gene MET and the schizophrenia-linked DISC1. Other proteins in the FOXP2 family are also cropping up in autism studies. In 2011, for example, Fisher and Evan Eichler described a child who carries two mutations: one in CNTNAP2 and another in FOXP17.

As these diverse studies attest, Fisher is far more interested in unpacking complex biological mysteries than in advancing any particular technique. “He’s question- and curiosity-driven,” says Sonja Vernes, who was once Fisher’s graduate student and now leads a group within his new department. “He’s quite good at choosing the right people to collaborate with to try to answer those questions.”

Fisher enjoys working with others, and his colleagues seem to like working with him just as much. When Fisher was in graduate school, for example, his advisor Craig would often throw get-togethers for the lab at his house. Fisher is “a good fellow at a party,” Craig says, and an impressive pianist.

On one occasion, after Craig and his wife had gone upstairs to bed, Craig went back downstairs to make sure the door was locked. “I came down and there was Simon and two or three other people still around the piano,” he recalls. “We used to have pretty good times.”

Today, just as he was then, Fisher is focused on trying to bridge the gap between genes and behavior. For example, last year he and others launched the interdisciplinary Nijmegen Cognomics Initiative to pursue tricky biological questions by recruiting thousands of people for sequencing, cognitive tests and brain imaging.

After more than a decade studying people with language problems, Fisher’s also interested in turning to the other end of the spectrum: people who master multiple languages with ease, and who can effortlessly translate from one language to another. “The biological underpinnings of these exceptional abilities are virtually unknown at this point, so this should be quite a fun new area to get into,” he says.

Despite his many successes, Fisher calls himself a “wannabe neuroscientist,” attributing his accomplishments to good collaborations and a healthy dose of luck.

“I think that you probably have to be lucky to be successful in science,” Fisher says. “But one of the secrets is knowing when and how to seize on those moments of serendipity.”