Rising star: Lucia Peixoto, breaking down the interplay between sleep and autism

Lucia Peixoto vividly remembers how she felt when she gave her first academic talk.

It was September 2006, and she had traveled to Woods Hole, Massachusetts, as a graduate student to present her work on the genetics of the parasite Toxoplasma gondii. Her lab mates at the University of Pennsylvania attended this meeting for parasitologists every year, and she was proud to get to share her work there, too.

Peixoto had always been comfortable in front of a crowd and understood English, but, having grown up in Uruguay, she primarily spoke Spanish. To prepare, she put in place a series of practice sessions, drawing on the determination and focus she had honed as a competitive volleyball player in high school. She rehearsed her slides with her adviser, biologist David Roos, poring over the details and discussing exactly what to communicate.

As Peixoto stepped onto the stage at the meeting, she felt a familiar thrill — excitement, adrenaline — the same rush she had experienced at the start of a big volleyball match. “You train, you train, you train, and you go play that important match in the finals,” she says.

It was an easy ace: She won the “Best Student Talk” award and, with it, the opportunity to present her work at a larger conference later that year.

Peixoto’s instinct to break down a challenge and drill the component skills has continued to serve her well as an autism researcher. Now age 43 and assistant professor of translational medicine and physiology at Washington State University in Spokane, she is busy laying the groundwork to serve up a better understanding of the interplay between sleep and brain development. Her research on a mouse model of autism, for example, has provided some of the earliest evidence that sleep disruptions in the condition have a genetic basis.

“She thinks so deeply about what you can really learn from animal models when you’re trying to study autism,” says fellow sleep researcher Matthew Kayser, associate professor of psychiatry and neuroscience at the University of Pennsylvania in Philadelphia.

For all her drive, Peixoto is also a true team player, supportive mentor and a champion for increased diversity and inclusivity in science, her colleagues say. She doesn’t shy away from discussing the difficulties she has faced as a woman in science “and why she wants to support the next generation,” says Elizabeth Medina, a third-year graduate student in Peixoto’s lab.

Propelling Peixoto forward is the knowledge that, whether on the court or in the lab, success rarely springs from luck alone, she says. “There is always work involved.” 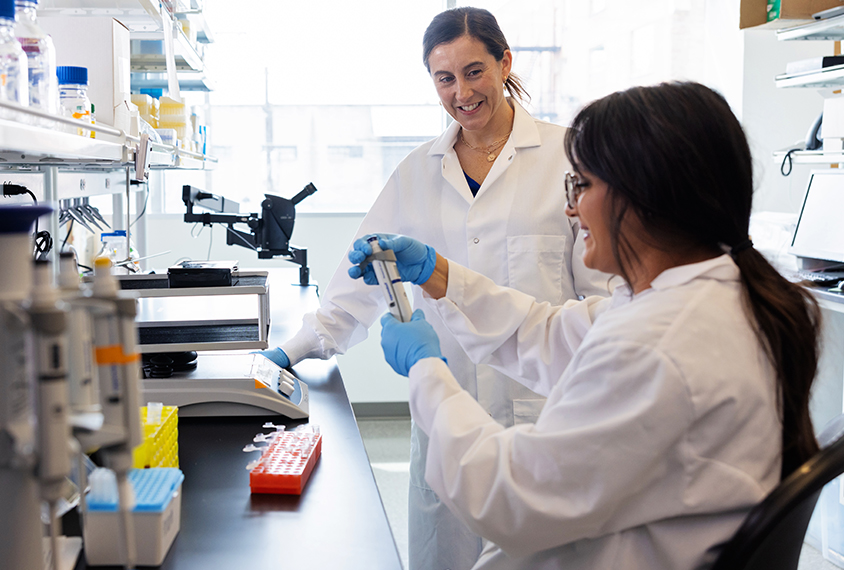 Peixoto was born in Montevideo, Uruguay. Her father worked as an economist and her mother trained as an architect but did not practice much after the birth of Peixoto’s younger sister, who has Down syndrome. “Taking care of my sister took a lot of her time,” she says.

Peixoto did well in high school and loved the idea of helping people, so she decided to train for a career in either science or medicine. She enrolled in an undergraduate program at Universidad de la República in her hometown in 1997 and soon joined a biochemistry lab, giving her an early taste of benchwork.

At a scientific conference in Uruguay in 2001, she met her future husband, Marcos Frank, then a postdoctoral researcher studying the role of sleep in visual development. “We have the geekiest meetup story,” she says. She asked him a question about his talk, and they kept in touch and both moved to the University of Pennsylvania two years later.

There she pursued a Ph.D. in biology, focusing on genomics and computational biology, inspired by advances in genome sequencing that she had learned about in college. “I thought, ‘This genome thing is going to be something,’” she says.

Within genomics, she had initially decided to focus on infectious diseases — something that particularly affects South America. But after earning her Ph.D. in 2009, she decided instead to study conditions like her sister’s and applied to a postdoctoral training program in neurodevelopment at Children’s Hospital of Philadelphia (CHOP).

“We had to give her bad news,” says Mike Robinson, professor of pediatrics at CHOP, who led the training. Peixoto’s Ph.D. work was under review at a journal but not yet published, making her ineligible for the program. The paper was expected to make a splash, though, and so Robinson met with her and encouraged her to reapply once the work was officially out — which she did. Robinson admitted her later that year.

With the program’s funding, Peixoto took a postdoctoral position in Ted Abel’s lab, then housed at the University of Pennsylvania. The lab was studying how the neural mechanisms of learning and memory falter in animals that model autism and other neurodevelopmental conditions. Abel brought Peixoto on to evaluate how learning and sleep deprivation affect the animals’ gene-expression patterns, using next-generation sequencing technology.

Peixoto says she initially felt out of place in the Abel lab. “I had never touched a mouse in my life! I was the most inexperienced person. I got bitten a lot.”

But again, she trained. After about six months of practice — with coaching from more senior lab members — she honed her handling techniques. And when it came time to interpret her data, her experience studying gene expression in parasites proved beneficial, Robinson says. The skills she had refined working in a simple system were directly applicable to the more complex animal model. 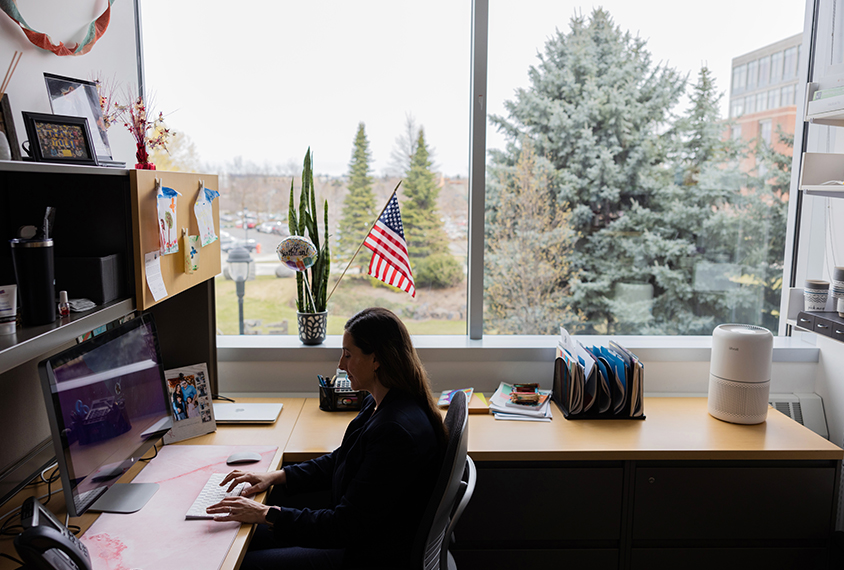 Still, Peixoto couldn’t shake the idea that before she tackled atypical development, she needed to master the “fundamentals” of typical development. “Coming from a background of genomics, I felt like we didn’t know enough about baseline,” she says. “So, I spent most of my postdoc thinking about how learning and memory regulate gene expression” in wildtype mice.

Peixoto and her colleagues discovered that different histones — the proteins that help package DNA into the nucleus in the form of chromatin — are expressed differently after wildtype mice form new long-term memories. Her team also pinpointed how gene expression fluctuates in mice after they learn to associate a sound with an electric shock. The work elucidated molecular pathways that spring into action to store different types of memories to help a mouse learn.

After presenting some of her postdoctoral research at a conference, Peixoto met Geraldine Bliss, president of the nonprofit organization CureSHANK, whose son has Phelan-McDermid syndrome, an autism-related condition caused by mutations in the SHANK3 gene. Peixoto was surprised to find out that Bliss and other parents in the organization were more concerned about the condition’s effect on their children’s sleep than on learning and memory.

That conversation and several others like it eventually persuaded Peixoto to again pivot her research focus. “I understood the journey of having a child that is different, and the challenges that that brings,” she says, referring to her mother’s experience raising her sister. “So I always wanted to work on something that really mattered to parents.”

In 2015, Peixoto started her own lab at Washington State University to probe how genetics shapes sleep in neurodevelopmental conditions. Her husband, who now collaborates with her, had started his own adjoining lab at the university the year before.

Peixoto began studying mice with a mutation in SHANK3. The animals have trouble falling asleep, as children with Phelan-McDermid syndrome do, and the mutation seems to be the cause, she and her team reported in 2019. The discoveries relied on detailed characterizations of sleep patterns and circadian rhythms in mice and people to ensure the team was measuring the same thing across species, Kayser says.

During the pandemic, Kayser and Peixoto began hosting joint lab meetings, he says. During one virtual session, she and her colleagues discussed how they had recorded electroencephalography signals from wildtype and SHANK3 mice at different ages, revealing how the animals’ sleep changes throughout development and how the mutation affects that development.

“Those are painstaking experiments in a mouse,” Kayser says — in part because some of the experiments need to be run at the crack of dawn when mice naturally go to sleep. How much sleep an animal gets after learning something new or what time of day they are tested can sway an experiment’s results, Peixoto’s group and others have found. 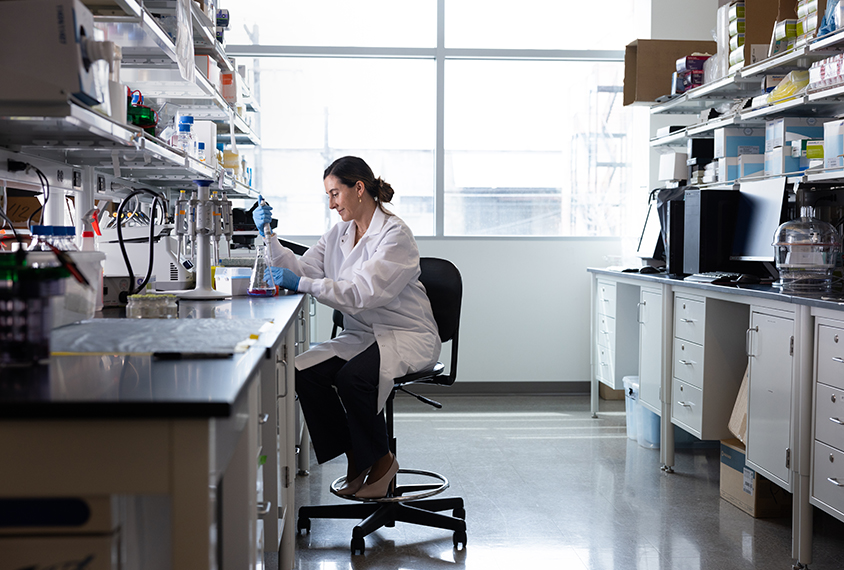 For all her careful work in mice, Peixoto has a deep concern for how her findings apply to people, her colleagues say.

Other researchers often manipulate a gene associated with the human disease and call it a model, Kayser says. “But [Peixoto] puts so much rigor into making sure that that’s really a valid model, and that it’s going to be useful for understanding mechanisms.”

After Peixoto read a study on sleep in autism, she reached out to the lead investigator, Annette Estes, professor of speech and hearing sciences at the University of Washington in Seattle, and the pair started collaborating on a grant proposal. “She doesn’t want her work, I think it’s fair to say, to only be about mice,” Estes says. “She wants it to connect to clinically meaningful questions and outcomes.”

As part of connecting her work to people, Peixoto also spends time thinking about how to increase racial and ethnic diversity in academia. She has served as co-chair of the Equity, Diversity and Inclusion Committee of the International Society for Computational Biology since 2019, and she regularly tweets about how existing biases harm the future of research.

Medina, who is her first graduate student, and whose parents immigrated to the U.S. from Mexico, says she appreciates that Peixoto understands what it’s like to be a woman in science from an underrepresented background. “I feel comfortable having her in my corner,” Medina says.

As a mentor, Peixoto also talks about the importance of ‘work-life balance,’ although she hates that particular phrase: “My work is not the opposite of my life!” she says. Instead, she refers to the challenge as a “juggle of priorities.”

Like every challenge, she builds on fundamentals. Living in Spokane, a location that is “close to nature,” affords a slower pace of life and helps her manage that juggling act, she says. And now that knee injuries have put her volleyball days behind her, she tries to squeeze in 30 minutes of exercise each day — from hiking to yoga — sometimes alongside her son and daughter.

Yoga in particular, she says, gives her the chance to let her perfectionism slide. “It’s not going to be the perfect yoga practice” when a 6-year-old is involved, she says. “But it’s better than no yoga practice.”