Brian Lee did not set out to be an autism researcher. Thinking mathematically (as he does), he wonders about the probabilities. “If I were growing up now, I might be some sort of Bitcoin trader, working my quant skills,” says Lee, associate professor of epidemiology and biostatistics at Drexel University in Philadelphia, Pennsylvania. “If you flicked one little switch early on, life would be so different now.”

Lee says he fell into the study of autism because he likes dealing in complexity, and he found that his quantitative skills could help unearth the various environmental and genetic contributions to the condition. In 77 peer-reviewed papers penned over a decade, he has revealed how perinatal factors such as gestational age at birth and prenatal factors such as maternal infection or vitamin D consumption affect a person’s chances of having autism. He has also shown a correlation between autism and prenatal antidepressant use, as well as autism and family history of psychiatric conditions.

Teasing these variables apart from other factors requires both careful statistics and large datasets, Lee says. Part of his numerical wizardry comes from his connections to scientists in Scandinavian countries, where universal healthcare records grant insights into individuals’ lives and exposures dating back generations. “It’s the stuff that epidemiologists’ dreams are made of,” Lee says.

The other part is his penchant for playing mathematical defense against potentially confounding variables, issues with ascertainment and modest effect sizes. “Brian’s contributions in that were elevating those challenges and making sure we tried to explicitly address them head-on, as opposed to pushing them aside,” says Craig Newschaffer, professor of biobehavioral health at Pennsylvania State University in State College. (Newschaffer served on Lee’s master’s thesis committee.)

Lee has developed powerful statistical methods for disentangling the complicated webs of genetic and environmental factors that may contribute to autism, his colleagues say. “He is a really skilled methodologist. He represents a new generation of analysts with updated quantitative skills,” says Lee’s longtime collaborator Cecilia Magnusson, director of the Centre for Epidemiology and Community Medicine at the Stockholm County Council in Sweden.

Growing up in Minot, North Dakota, a town of about 35,000 at the time, Lee won piano competitions and, at age 12, came in second in the 1994 National Spelling Bee. It was the first year that the event was televised. “I’m pretty sure I’m one of the few epidemiologists who has ever been on ESPN for more than a split second,” he says.

Lee’s mother, a librarian, encouraged him to read widely, and his father, a physician, inspired him to consider health and medicine as a career, he says. 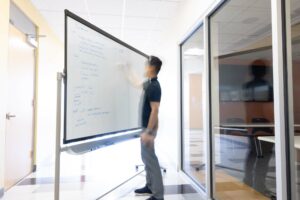 Early exposure: Brian Lee’s career might have gone in a completely different direction, if not for a chance encounter with epidemiology.

And so, as an undergraduate student at Harvard University starting in 1999, Lee found himself on a pre-med track — but he quickly realized his heart was not in treating people. He switched to biological anthropology, the study of human evolution, and designed an experiment for a class to test a hypothesis about primate diets. “It got my feet wet in terms of independent research,” Lee says.

Lee dove into more experimentation, this time with the brain. He took a job in Harvard neurologist Alfred Geller’s lab, modifying DNA to enhance learning in rats. After graduating in 2003, Lee headed to the University of California, San Francisco for a loosely designed internship in which he coded web pages, among other tasks. There, he crossed paths with an epidemiologist named Jonathan Showstack, who opened his eyes to a field that would make use of his mathematical abilities.

Lee’s facility with numbers had been apparent since middle school, when he won city and state math competitions. He had also just read Jared Diamond’s book, “Guns, Germs, and Steel,” which describes how environmental advantages set the stage for some cultures to dominate others throughout history. The idea that health and environmental factors may play invisible roles in life outcomes spoke to Lee. So as Showstack broke down the basic divisions of his field — disease surveillance, environmental epidemiology and so on — a switch flicked on in Lee’s brain. “All of a sudden, I was like, ‘Hey! Maybe I could think about epidemiology as a career direction.’”

Lee applied to epidemiology Ph.D. programs and ended up at Johns Hopkins University in Baltimore, Maryland, where he wrote his thesis on how neighborhoods influence cognitive function in older adults, as part of the Baltimore Memory Study. His overarching curiosity was: Why do people’s lives end up the way they do?

While working on the neighborhood study, he found another opportunity to answer that question — involving autism. In a study published in 2008, he used a statistical technique to help identify seasonal patterns in the likelihood that a newborn will go on to have an autism diagnosis.

After earning his Ph.D. in 2009, Lee was offered a postdoctoral fellowship at the Karolinska Institutet in Sweden, working with the Swedish health registries. It was a tantalizing opportunity for a budding epidemiologist, “millions of records, spanning multiple tables in a complex database,” he says. At the same time, Newschaffer recruited him for a tenure-track position at Drexel University.

So Lee did both — sort of. Newschaffer gave him the go-ahead to spend the first month of his time at Drexel living in Stockholm and working pro bono with a biostatistics research group at the Karolinska Institutet. There, Lee and his colleagues used Swedish health data to examine the link between blood type and risk of preeclampsia. During his time in Sweden, Lee earned the trust of his Swedish colleagues, who invited him to use the prized Scandinavian health registry data.

Through those connections, Lee and his colleagues later used the Swedish National Patient Register to establish a modest but significant association between prenatal infections and autism, described in a 2014 paper. “Not everyone gets their fingers into the jar, so to speak, but he does because he’s trustworthy and very nice,” Magnusson says.

Magnusson is not the only one of Lee’s collaborators to cast his personality as an asset. “To have him at Drexel is an incredible draw for many of us, and having him in our immediate orbit, in our atmosphere, he bolsters our research experiences,” says his Drexel colleague Lindsay Shea, director of the Policy and Analytics Center at the Drexel Autism Institute. In August, when Shea reached out to tell Lee their latest manuscript had been rejected, Lee responded immediately — even as he was moving into a new home. He said that the rejection was actually a good thing, because the comments would help redirect and improve the work. “That sort of interaction can really shift how you work through your day,” she says.

Lee’s collaborative style also shows up in his own laboratory — which makes him an outstanding leader and mentor, Shea says. One of his graduate students, Jessica Rast, says that Lee respects the goals of his mentees, even when they differ from his own. Rast says she wanted to work on a project that was just outside the scope of Lee’s grant. Instead of rejecting Rast’s request, Lee found a way for her to pursue her interests under his guidance. “He’s not interested in fitting me within his program; he’s interested in giving me experience to learn,” Rast says.

Lee taught himself to repair computers as a child, fixing a broken sound card with scavenged parts so he could play multiplayer “Doom” over his 56k modem. He bolstered his self-taught skills with a few programming classes and a stint at Harvard’s computer help desk as an undergraduate student. He was then prepared to tackle all manner of hardware and software challenges. “Kind of like a guy who knows how to fix his car, I’m that guy who never needs to call tech support,” he says.

But it wasn’t until he had to grapple with the massive Swedish databases that his real lessons in coding began. With millions of records and hundreds of variables, crunching data can be a monumental task. “That was a much bigger problem to solve than a broken sound card,” he says. 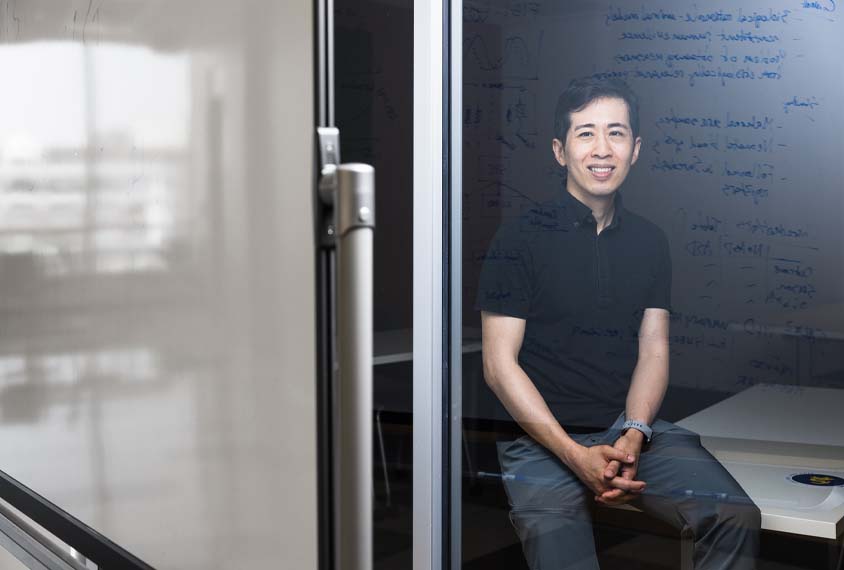 One of Lee’s early epiphanies was just how many possible associations there are between data points in a real-life database. As a graduate student, for example, he recognized that a neighborhood represents much more than an address. Wealth, education and race all affect the likelihood that someone will live in a certain locale, and each of these factors has its own associations with lifelong health.

Using his computing skills to decipher these webs of influence has come to define Lee’s career. In doing so, he has reshaped how autism epidemiology is done, Newschaffer says. One of Lee’s core contributions is an improvement, based on machine learning, on a statistical method called propensity score weighting. This strategy debuted in a 2010 paper, which remains his most cited work. It helps distinguish exposures such as drugs and diet from the factors that lead to those exposures — a potential source of confounding. For example, prenatal antidepressant use is usually accompanied by a psychiatric diagnosis, and that diagnosis may independently affect a child’s outcome. Propensity score weighting works by making two groups — mothers who were either exposed or unexposed to an antidepressant, for instance — as statistically similar as possible in every way except for the exposure in question.

In a 2017 study, Lee and his colleagues used a related technique called propensity score matching to identify a small but significant association between women taking certain antidepressants during pregnancy and autism in children. Later that year, Lee, Magnusson, Newschaffer and others used the same technique to parse Swedish registry data for more than half a million people, revealing lower chances of autism among the children of mothers who took prenatal multivitamins.

Lee’s newest work extends beyond the womb to lifestyle, health and policy factors that affect autistic people as they develop and age. This year, he and Shea are examining Medicaid data on the use of psychotropic medications by people with autism to determine the safety of such usage, an understudied area. They are also developing a tool for Pennsylvania state officials that helps autistic adults enrolled in Medicaid navigate life changes or issues such as contact with the criminal justice system, Shea says.

When Lee and Shea work with policymakers, Lee does not flex his Ph.D. or push his ideas, Shea says. Rather, he asks how he can help. “There are few ways that you can engage with policymakers that would be more effective,” she says. “I’m eager to get Brian in as many of those conversations as possible.”