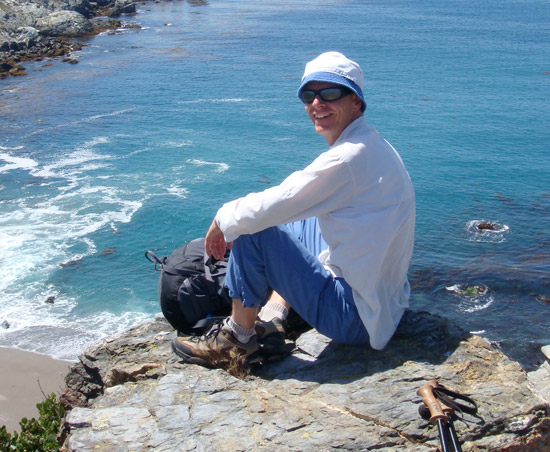 Sitting pretty: Ralph Adolphs, here on California’s Catalina Island, likes challenges in and out of the lab.

The summer of 1993 would turn out to be a turning point in Ralph Adolphs‘ life.

That summer, he moved from sunny California to a massively flooded Iowa City, and began working with several people who would leave an indelible mark on his career. Antonio Damasio — a neuroscientist and book author famous for linking emotion and reason in the brain — was Adolphs’ postdoctoral fellowship mentor at the University of Iowa. Dan Tranel, a young professor in the department, would become Adolphs’ co-author on dozens of scientific papers, not to mention his running partner and best friend.

And then there was S.M.

A friendly and childlike woman in her late 20s, S.M. would become one of the most famous patients ever cited in the psychological literature. She has a rare genetic condition called lipoid proteinosis, in which calcium deposits eat away at the brain tissue. Unlike in other patients with this disease, however, S.M.’s lesions are localized to just one spot on each side: the amygdala, an almond-shaped mass of tissue sitting deep behind the eyes.

For nearly two decades, using any technique he can, Adolphs has been trying to figure out how S.M.’s mind — and, by extension, the human amygdala — works. An avid outdoorsman, Adolphs, 47, has run a dozen 50- and 100-mile races, and his colleagues say he approaches science with the same stamina and intensity. He has already published more than 100 scientific papers, several of them revealing intriguing ties between S.M. and people with other brain disorders, including autism.

Tranel first published S.M.’s case report in 19901, to little fanfare. She was just one of hundreds listed in the university’s world-famous registry of patients with brain lesions.

That collection lured Adolphs — a foodie and wilderness lover — to the flatlands of the Midwest: he was convinced it would help him understand how the brain generates and understands emotions in people, rather than in animal models.

Within a year of meeting S.M., he had published a paper in Nature showing that she cannot identify fear in facial expressions2. Years later, using an eye-tracking machine, he discovered why: she doesn’t look people in the eyes3.

These cognitive problems are similar to what’s commonly seen in autism — people with the disorder have trouble gauging others’ beliefs, and avoid eye contact.

That connection wasn’t lost on Adolphs when he launched his lab at the California Institute of Technology in 2004. He decided to systematically investigate the similarities and differences between adults with autism and two rare groups: those with amygdala damage, like S.M., and those with agenesis of the corpus callosum (ACC), who are missing the large bundle of fibers that bridges the two sides of the brain.

Adolphs is known for this kind of experimental creativity. “Most people in science just build on what other people have done. But he will take a completely new approach,” says Joe Piven, professor of psychiatry at the University of North Carolina, Chapel Hill.

The Adolphs lab is in a shiny building that is striking against the lush and serene backdrop of Caltech’s campus. His office has an air of understated sophistication — one of two flat-screen monitors displays a color-coded calendar, and the only visible scrap of paper is the napkin underneath a small pile of potato chips.

A miniature stuffed white owl on his desk is a kitschy reminder of his Ph.D. dissertation, a connectivity map of the barn owl’s auditory system5. That project didn’t satisfy his real intellectual interests. “At the end of that, I just felt like I still was very far away from the really difficult, interesting questions about the human mind,” he says.

He was fascinated in particular by social cognition — the thinking that comes between social perception and social behavior. For example, when people look at others’ faces, they immediately begin making inferences about who they are, what they think, what they may say or do next. “We do something with respect to thinking about people that we just don’t do when thinking about coffee cups or books,” he says.

But in the early 1990s, before the advent of functional magnetic resonance imaging, there were few options for studying the human brain. Around that time, Adolphs saw Damasio give a guest lecture about Iowa’s growing collection of people with brain lesions. Adolphs was immediately intrigued, and a year later — after defending his thesis and getting married — found himself in Iowa.

Months before he met S.M., Adolphs encountered Boswell, a man with severely damaged frontal and temporal lobes, including the amygdala6. Boswell had no sense of smell and his short-term memory had a limit of about 45 seconds.

Adolphs found that Boswell had trouble recognizing facial expressions, particularly fear. Because animal work had connected the amygdala to fear, Adolphs began looking for patients with selective amygdala lesions, which led him to S.M.

Adolphs and Tranel studied Boswell for years, even after Adolphs ascended to professor in the department and expanded his research interests. On many occasions, Tranel and Adolphs would drive an hour and a half to the care facility where Boswell lived. They chatted with him, trying to soak up as much as possible about the way his mind worked, and sometimes performed informal experiments to tap into his emotional reactions.

Adolphs convinced Tranel to train with him on his 100-mile ultra-marathons. On many weekends, they ran together in a hilly region of Iowa for eight hours at a time. That gave them a lot of time to talk — mostly about work. “We’d be halfway through a 50-mile training run and have some great insight about how to reanalyze some data,” Tranel says.

It takes a certain kind of personality to take on that kind of sport. “You’re basically doing something that’s really extreme just for the experience of having done it,” Tranel says. “Ralph’s done that a lot in his life.”

In his research, Adolphs’ adventurous spirit has led him to some unconventional experiments.

For example, when he was in Iowa, Adolphs recorded brain signals directly from electrodes inserted in the brains of people undergoing brain surgery to remove epileptic tissue. He found that both the prefrontal cortex7 and the amygdala8 respond differently when people look at aversive pictures, say a snarling dog or a violent war scene, compared with pleasant ones, such as a smiling baby or a delicious plate of food.

In his first year at Caltech, Adolphs got a phone call from Lynn Paul, a researcher and the head of the National Organization for Disorders of the Corpus Callosum. Paul had studied the psychological aspects of ACC for years, and wanted Adolphs to help her scan the brains of this rare group.

“Within a week, [Adolphs] had gotten seed money to start the program,” says Paul, a senior research fellow at Caltech. “I didn’t have an appointment, or any title here, but that’s Ralph. He just thought, ‘Well, this is a good topic. We should study this.'”

As it turned out, the ACC group fit in nicely with the experiments Adolphs was planning for adults with autism.

Adolphs had stumbled on autism many years earlier. In 1998, he showed that S.M. and two other individuals with amygdala lesions rate photographs of faces that look untrustworthy — such as a scowling man wearing sunglasses — as trustworthy9.

Joe Piven, then a brain-imaging expert in Iowa’s psychiatry department, convinced Adolphs to repeat the experiment in high-functioning adults with autism. In 2001, they reported that this group, like S.M., tends to be more trusting than healthy controls are10.

With access to three rare groups — those with autism, ACC or damage to the amygdala — Adolphs is in a unique position to test two long-standing cognitive theories of autism: one that argues that social impairments of the disorder arise from abnormal amygdala activity4, and the so-called ‘connectivity hypothesis’, which says autism stems from weak long-range connections in the brain.

Participants from each group perform a long battery of tasks, ranging from having conversations while Adolphs’ team measures their eye-gaze patterns, to playing a virtual slot machine while the researchers image their brain activity.

He and Paul have already shown that people with ACC have trouble identifying fearful faces and, when they make these judgments, they don’t look preferentially at the eyes. People with autism process faces in a similar way, suggesting that they may have weakened long-range connections just as those with ACC do.

Adolphs is also investigating how individuals with amygdala lesions or ACC score on standardized tests of autism. Last fall, he reported that S.M. has a skewed sense of personal space, a trait that has been anecdotally observed in people with autism11. This month, however, he reported that neither S.M. nor another patient with amygdala lesions come close to meeting diagnostic criteria for autism12.

“The amygdala has probably gotten too much attention, frankly, in large part because of our own work,” Adolphs says. “The story is much more complex.”

Pinpointing which brain circuits are at fault is the first step in designing effective treatments for autism, Adolphs says. But he is equally interested in studying a disorder that’s never the same in any two individuals.

“To really get a sense for the boundaries and potential subtypes within autism — it’s philosophically challenging,” he says. “I’d like to understand what kind of a mind counts as a mind of autism.”