Matthew State: Bridging the gap between bench and bedside 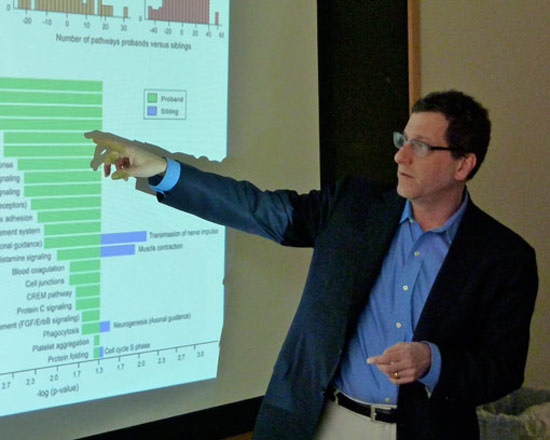 Soon after arriving at Yale University in 1999 to begin work on a doctoral degree in genetics, Matthew State found his way to a community mental health center in Branford, Connecticut, a small town eight miles north of New Haven.

He signed on as the center’s only child psychiatrist, treating low-income children for anxiety disorders, depression, autism, schizophrenia and psychosis.

These days, as co-director of the Program on Neurogenetics and deputy chair of research in psychiatry at Yale, he commutes weekly between Manhattan, where his wife and 13-year-old daughter live, and New Haven. But he still spends every Wednesday at the center, from 1 p.m. well into the night, and remains on call for his patients there.

“Matt will take a call at any time of the day or night,” says Maggy Trapazzo, clinical director of the Branford Counseling Center. “We’ve woken him out of a sound sleep to renew a prescription when he was in Indonesia — we didn’t know he was there,” she recalls. “But he gets right up and does it.”

Dedicated child psychiatrists may not be a rarity, but State is among the few who can also lay claim to a career as a world-class scientist, delivering breakthroughs in autism genetics.

State’s work in 2005 on the SLITRK1 gene, associated with some forms of Tourette syndrome, was cited as a top scientific breakthrough that year by Science magazine. In autism research, he is best known for identifying the risk gene CNTN4. His laboratory is one of two teams sequencing and analyzing samples and data from the Simons Simplex Collection (a project run by SFARI.org’s parent organization), a repository of genetic samples and clinical profiles from more than 2,500 families.

State is not only a fine researcher himself, but a stellar team player, notes Bernie Devlin, professor of human genetics at the University of Pittsburgh, and State’s collaborator.

“Matt is one of a handful of exceptional collaborators who inspire me,” Devlin says. “He has a knack for helping you dig deeper into a problem than you had ever considered before.”

Ironically, State never intended to become a physician or biomedical researcher at all. Growing up in a politically active family, he intended to build a policy career in Washington D.C. While still an undergraduate at Stanford University, he landed internships with Senator Ted Kennedy and at the Carnegie Endowment for International Peace.

But after graduation, while he was working on arms control as a staff member for Senator Gary Hart, “I had an epiphany,” he says, realizing that D.C. wasn’t for him. “It’s a tremendously adversarial environment. My personality wasn’t well-suited to Washington.”

Deciding that he wanted to have a more personal impact on people’s daily lives, he returned to Stanford for his M.D., and did a residency in child psychiatry at the University of California, Los Angeles.

Even so, the negotiating skills State picked up during his stint on Capitol Hill, combined with a temperament that naturally seeks to reconcile different points of view, have become key factors in his success as a researcher, physician and administrator.

Just about everyone who works with State comments on his almost uncanny ability to drill through to the nut of a problem and to integrate disparate perspectives to find workable solutions.

“His ego is never in the game,” says John Krystal, chair of psychiatry at Yale. “He is remarkably generous and also tremendously generative, stimulating people to get involved.”

Krystal was so impressed by State’s energy and capacity to engage people that he asked State to be his deputy chair two years ago. At Yale, child psychiatry and psychiatry are separate departments, Krystal notes, so having a child psychiatrist serve as his second-in-command is quite an anomaly.

State has since worked to bring together a research council of senior investigators across disciplines at Yale. “Our goal was to break down those intellectual silos and look for common interests and opportunities,” Krystal says.

Ellen Hoffman, a child psychiatry resident who came to Yale, says that soon after her arrival, State quizzed her about her interests and encouraged her to collaborate with a genetics lab — using zebrafish to investigate how rare genetic variations contribute to autism. “Because I expressed an interest in model systems, he identified this project, which didn’t exist before I came here.”

For his part, State lists training physicians like Hoffman to do basic research in genetics as his most satisfying career accomplishment so far. “I’ve got three child psychiatrists and a pediatrician who are doing beautiful, sophisticated work,” he says. “In my field, there are really just a handful of people doing basic molecular genetics.”

State’s perspective on this approach came from another epiphany of sorts — when he was training to be a psychiatrist at Stanford.

“I was taking care of kids with severe illness and thought that I really needed to understand genetics,” he says. With no background in science, “I felt like I had to start from the beginning.” He decided to get a Ph.D. in genetics.

Donald Cohen, then chief of child psychiatry at Yale, was among the only people open to this approach. He allowed State to get his Ph.D. while he was a junior faculty member in the department.

“[Cohen] had thought for a long time that it was important for child psychiatrists to have a stronger grounding in science, so he created this really unusual situation for me,” State recalls.

Early in his research career, State was a staunch believer in the importance of rare variants. “I like rare variants because they have big effects,” he says. “Finding one extremely rare variant that can point to the center of a biological process can be more powerful in my view than finding out a ton about 30 different alleles that contribute a tiny bit of information, which is what we’re seeing in a lot of common alleles.”

Over the years, however, he’s come to recognize that no one approach is likely to identify the causes of autism. “The genetic architecture of autism is likely to include both common and rare variants,” he says.

Still, State believes that genetics can only take autism research so far. “It’s the biological mechanisms that are going to be a target for treatment,” he says, “not the particular variation in one person versus someone else.”

State says he spends much of his time at clinical conferences persuading physicians to screen for genetic disorders. This is important for families both medically — because carrying certain chromosomal deletions can result in severe medical issues — and emotionally.

“In psychiatry we went through this awful period where moms were being blamed for autism,” he notes. “At least you can inform people who might still have this notion what we understand about heritability, and how it’s similar to other medical disorders.”

This sort of sensitivity to the emotional needs of families at the Branford Counseling Center has impressed Trapazzo even more than State’s encyclopedic knowledge of genetics and disease.

“He has the capacity to get down and be with these families around the truth of their world,” she says. “He’s willing to be involved from molecules and DNA right down to the concrete things that make life better for our kids.”