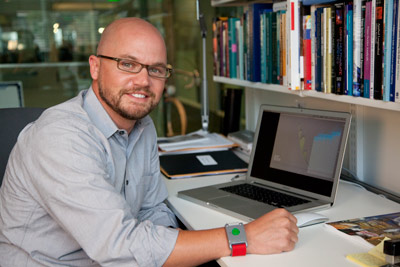 Wearable devices: Matthew Goodwin is using sensors, such as the device shown here on his wrist, to accurately monitor anxiety and repetitive behaviors in children with autism.

Here’s a scenario that Matthew Goodwin is all too familiar with. A child with autism is sitting at a desk, seemingly checked out, staring into space. A teacher asks the child to get back to work, and the child stands up, flips over the desk and runs out of room.

“One second he’s fine and the next he’s having a tantrum,” says Goodwin, assistant professor of health sciences at Northeastern University in Boston.

But looks can be deceiving: Goodwin has shown that some children sitting and looking calm may actually be deeply anxious, with a pulse racing at 120 beats per minute. And the child’s apparent ‘spacing out’ may be an attempt to self-regulate his physiology.

“If I knew the child’s internal state, I wouldn’t place a demand on that kid. I might encourage him to relax or take a walk,” says Goodwin. “I would adjust my interaction style to calm him back down.”

The problem is that many children on the more severe end of the autism spectrum are nonverbal, and even those who can talk often have difficulty identifying and expressing how they feel. Goodwin is trying to develop alternative ways to measure these children’s internal states and in turn help teachers and parents modulate their interactions with them.

Goodwin is tackling this task with myriad monitors — from ceiling cameras and microphones to wearable sensors that track heart rate, temperature and sweat — and computer algorithms. Together, these may be able to determine when a child is stressed and what triggered the episode, and to evaluate the most effective strategy for making him feel better.

Similar tools could be used to assess treatments as well — automated monitoring may provide a way to more quantitatively measure changes in hyperactivity, for example, and even irritability and aggression, which are typically measured by short questionnaires.

Researchers who have worked with Goodwin uniformly comment on his unique ability to think about how to apply technology to autism care.

“Many people are experts in the autonomic nervous system, signal processing and hardware design, but he is able to bring these roles together and think about how we can develop methodologies that can ultimately impact care,” says James Rehg, professor of interactive computing at the Georgia Institute of Technology and a collaborator.

Goodwin began working with children who have autism early in his career, volunteering at a school for children with autism for 20 hours a week during a year of college spent at Oxford University in the U.K.

“He’s an experimental psychologist but also really tuned in to the kids — I’ve been in this field for 30 years, and there are not a lot of people like that,” says Terry Hamlin, chief of staff at the Center for Discovery in Harris, New York, a residence facility on a farm in the Catskills for people with autism and other disabilities. “He also makes wonderful connections and brings people together.”

The children at the Oxford center had challenges making eye contact and with joint attention, classical features of autism, Goodwin recalls. “But after showing up repeatedly and just spending time together, they would start to look at me and talk to me and show some empathy toward me,” he says. “Around then, I started reading the literature, which says these kids have no theory of mind, but that didn’t match the behavior I saw.”

Goodwin returned to the U.S. for college in 1995 and began interning at the Groden Center in Rhode Island, a day and residential program that serves profoundly impaired children with autism.

He noticed that stress and anxiety often aggravated the children’s behavioral problems. The clinical staff would try to calm the children down using a variety of methods, such as deep breathing or cognitive exercises. Goodwin says he wanted to understand what triggered the anxiety in the first place, and how effective the different methods were.

“That requires some measure of how stressed or non-stressed a person is,” says Goodwin. But if children can’t identify or communicate how they feel, how can a scientist adequately measure it? Or efficiently treat it? “Most stress research is based on surveys or direct behavioral observation, and herein lies the problem,” Goodwin says.

Fortunately for Goodwin, two technology trends were then beginning to be incorporated into the study of human health.

The first was wearable computing — sensors on the body or in clothing or accessories that can measure an individual’s biology or behavior. These are especially advantageous for studying children with autism, who often have sensory and movement issues that make traditional monitoring technologies unsuitable. They can be also used in real-world settings, such as the home or classroom, and can monitor a child for hours, days or weeks, rather than in a limited lab session. 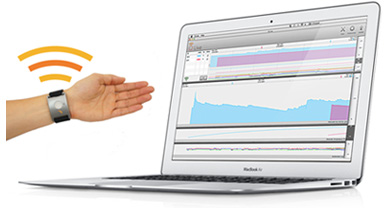 Affectiva Magic wristband: The Affectiva sensor tracks stress and other measures in children with autism, wirelessly transmitting the data to a computer.

The second trend was ubiquitous computing, in which sensors built into spaces, such as classrooms, record what’s going in the environment.

One of Goodwin’s first targets was hand flapping, a repetitive behavior seen in 70 percent of children with autism. “We don’t know why kids do this. We don’t know if it’s stimulatory or self-soothing,” says Goodwin. “It’s certainly socially stigmatizing.”

Hand flapping and other repetitive behaviors are a hot-button issue among families, educators and clinicians. Some education programs try to stop children from engaging in these behaviors, but that can make the child agitated or aggressive.

Goodwin is passionate about trying to understand these behaviors. “We ignore them, restrain them or medicate them,” says Goodwin. “But before we decide what to do about it, let’s try to decide why they do it.”

Preliminary research suggests that people with autism engage in repetitive behaviors for a variety of reasons — sometimes to calm down, sometimes to excite themselves. Hand flapping may even act as form of communication, showing happiness when they get something they want or frustration when they can’t get out of a situation they don’t like.

“If this is how they communicate, regulate stress and sensation, and feel their body, the last thing I want to do is stop them from doing it or medicate them,” says Goodwin.

Most studies measuring restricted and repetitive behaviors in autism use either parent report or direct observation, both of which can be unreliable. Two observers rating repetitive behaviors in real time agree only a third of the time, says Goodwin, largely because the behaviors can start and stop so quickly. Video recording is more accurate but is slow and expensive.

For his doctoral dissertation, Goodwin analyzed data from children with autism who wore three accelerometers — small devices that detect movement — one on each wrist and one around the waist. He created algorithms that, after a short training period, can automatically detect when a child is flapping or rocking, and found that the three devices together have an accuracy of 90 percent1.

Goodwin strapped one such device around my wrist when I visited his lab, and we watched as it conveyed a stream of data to a laptop. A set of lines on the screen rose and fell throughout the conversation as my attention focused or wavered.

One of the biggest challenges of the project is to figure out how to interpret the sensor’s signals. Unlike, say, an electrocardiogram, which records electrical signals from the heart, there is no standard pattern for skin conductance.

Goodwin and his colleagues are analyzing data collected from ten children with autism wearing accelerometers and heart rate monitors in a classroom during a variety of tasks and emotional states.

Their goal is to determine whether repetitive behaviors are triggered by particular activities or internal states. The answer is unlikely to be simple: According to their preliminary findings, repetitive movements appear to be linked to physiology in some children but not in others.

Goodwin is also part of a five-year, $10 million project, funded by the National Science Foundation, to create automated tracking technology to help diagnose people with autism and track the outcome of therapies. The project involves bringing together a mix of sophisticated technologies, including cameras, sensors and machine learning — computational techniques that learn from data — to solve clinical problems.

He is also working with Hamlin on a pilot project at the Center for Discovery, set in a classroom outfitted with ten ceiling cameras and two microphones. The children and staff all wear wireless monitors that record their heart rate, temperature and movement.

The researchers are creating algorithms to automatically identify problem behaviors, such as wandering off or self-injury, based on data from the sensors. They can also look at the physiological data leading up to a behavioral outburst, as well as the physiological consequences of the behavior.

Hamlin says they have been recording for about a year and that the computers are now able to automatically recognize different behaviors.

The next challenge will be figuring out what to do with the enormous volume of data being collected. “We have to get it into the hands of clinicians to figure out which measures are predictive,” Goodwin says. He is also setting up instruments at his own testing center at Northeastern.

Goodwin has also helped launch a new graduate program at Northeastern that bridges technology and medicine.

“I was trained as a behavioral scientist and got interested in computer science late in life,” says Goodwin. (At 36, late is a relative term.) “The idea of the program is to train the next generation simultaneously, so they will be able to do what we can’t.”