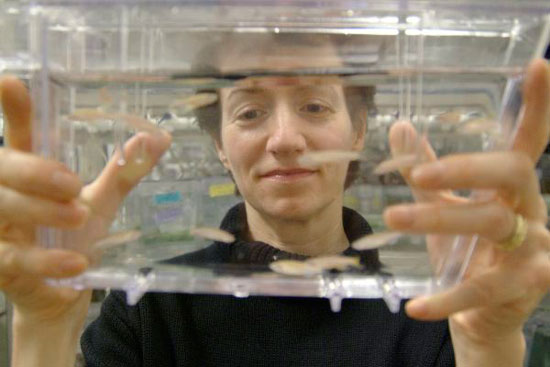 Every morning in Hazel Sive‘s lab begins with an act of creation. In a compact room stacked high with tubs of zebrafish, a researcher selects one tub and pulls out the clear plastic divider separating an eager male fish from several waiting females. The darting creatures quickly release sperm and eggs, and fertilized embryos rain down to the bottom.

These small, transparent fish embryos are being used for research on autism — an unusual choice, as they obviously lack the complex behavioral repertoire seen in the disorder.

But zebrafish share many genes with people, allowing researchers to study the function of candidates identified in human genetic screens of autism. And an arsenal of tools is available to manipulate those genes, making them an ideal system in which to probe the genetics of autism.

Sive, professor of biology at the Massachusetts Institute of Technology and member of the Whitehead Institute in Cambridge, Massachusetts, is a classically-trained embryologist and developmental biologist, and an expert in zebrafish genetics.

“She is a leader in the field of developmental biology,” says Mriganka Sur head of MIT’s department of brain and cognitive sciences. “To have someone like her who has made many important discoveries about how the body and brain of zebrafish is put together, that’s a big coup for the autism field.”

Over the past few years, scientists have identified a number of genetic regions linked to autism, thanks in large part to gene chips that make it possible to survey the entire genome in large numbers of people. Researchers have yet to figure out which genes within these genomic chunks are responsible for an increased risk for autism, however. For example, one notable region on chromosome 16, linked to one percent of autism cases, contains about 25 genes. But scientists know very little about the function of these genes.

“It’s easy to discover genes as the tools of genetics get better and better, but much harder to discover what they do,” says Sur. “There’s only so many ways you can look at them using a mouse or human brain.”

Once Sive and her team find specific neural defects linked to candidate genes in zebrafish, they can look for ways to remedy those defects.

“This is where the fish is really fantastic,” says Sive. “They are small so we can put them in wells in tissue-culture dishes and look for them getting better with a particular chemical.”

When Sive describes her work with zebrafish, she is careful to call them ‘tools’ rather than ‘models.’ The distinction may seem subtle, but Sive notes that she is using the fish specifically to assess gene function and potential treatments.

“The point is not to get something in fish that happens in humans,” she says. “The point is to get a handle on gene function that we can use to assay human [candidate genes].”

Her perspective is still somewhat unique; most people studying animal models of disease aim to mimic the human versions as closely as possible. But the approach is likely to become more popular as the need grows for relatively simple methods of understanding gene function.

“I think it is really a creative thing that she’s trying to do,” says Nancy Hopkins, a biologist at MIT who devised technologies to study zebrafish, identifying hundreds of genes vital for development. “It’s a risky project, but with huge possible outcomes,” Hopkins says.

About seven years ago, Sive, a native of South Africa, became interested in the architecture of the brain. She became particularly intrigued by the neural tube, a structure unique to vertebrates. The center of the neural tube develops into ventricles, which form an internal circulatory system that bathes the developing nervous system in cerebrospinal fluid.

Because zebrafish embryos are transparent, scientists can observe development, including the formation of the neural tube, as it unfolds in live animals. Sive quickly realized that she could use the transparent fish to study human brain disorders, such as hydrocephalus, characterized by the accumulation of cerebrospinal fluid in the ventricles.

“Human mental health disorders are extremely poorly understood, so we started wondering whether fish could be a tool to address some of the functions of the genes that might be involved,” Sive says.

For autism research, her approach became useful only after geneticists began identifying segments of DNA harboring a number of candidate genes for the disorder. In January 2008, Mark Daly a geneticist at the Broad Institute in Cambridge, Massachusetts, identified the deletion on chromosome 16. “Then we had a set of genes we could really work with,” Sive recalls.

Amid the gurgling tanks in the fish storage room, a researcher collects a newly-created embryo and whisks it away to a microscope. While the embryo is still at the single-cell stage, it is injected with a molecule designed to reduce the function of a single target gene by about 50 percent — roughly mimicking an individual with just one functional copy.

Just 24 hours later, the zebrafish embryo resembles a small, transparent snake curled tightly around a ball, the yolk cell. The developing spinal cord stretches down its length, and both the flow of blood and the beating heart are visible under a simple light microscope.

At this stage, the zebrafish’s brain is the approximate equivalent of a 5-week-old human embryo. Red dye injected into the ventricles reveals a characteristic outline of peaks and valleys representing the normal structure of the forebrain, midbrain and hindbrain. Although it can’t yet swim, a healthy day-old embryo flinches when poked, providing a simple method for detecting motor deficits. Fluorescent dyes highlight the shapes of neurons and their projections, or axons.

To date, Sive’s team has identified 28 zebrafish homologs — sequences that resemble gene sequences in humans — of the genes in the chromosome 16 deletion linked to autism. Researchers in her lab have knocked out 11 of the genes, and discovered that 10 of them appear to play vital roles in the brain.

In some cases, mutations in the genes cause the brain to be misshapen and small. In others, they cause nerve cells to grow in the wrong direction or in the wrong pattern. For example, in a healthy fish, the nervous system looks like a ladder, with two parallel strands and a series of regular rungs. But fish that lack PPP4CA, one of the genes in the 16p deletion, do not have specific midbrain structures and part of the optic tract, and their spinal cord neurons are jumbled.

“That is quite extraordinary,” says Sive. “We were quite surprised to see so many really devastating brain abnormalities in the fish.”

Sive feeds this information back to Daly, who continues to study these genes and others in people in autism. “We tell Mark [Daly] what we’re learning, and he tells us about what he’s learning,” says Sive. “We’re quicker than him because human genetics is so slow.”

Sive and her colleagues also aim to find ways to fix these defects by testing a number of small-molecule drugs on zebrafish embryos.

It’s too early to identify any promising candidates, but colleagues in both the zebrafish and autism fields hope Sive’s gamble proves successful.

“Science doesn’t allow enough of this kind of exploration because we are so geared to funding stuff we know is going to work,” says Hopkins. “If this really works and becomes a paradigm, it would be fantastic.”