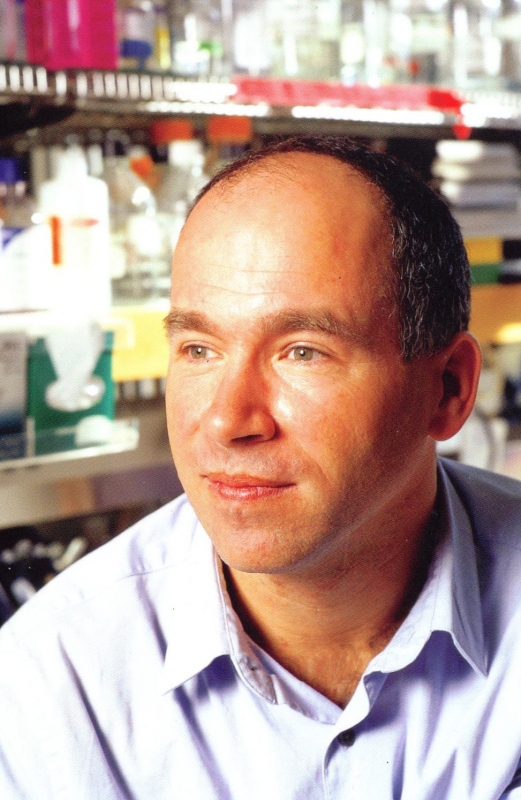 In May 2002, on an isolated hilltop in Delphi overlooking the Aegean Sea, several dozen scientists convened to discuss how the cerebral cortex, the brain’s outer layer, develops.

It was there, at the site of the legendary Greek oracle, that Gordon Fishell reached a turning point in his career.

Fishell, then 42, had been studying how the developmental environment in a mouse embryo influences how stem cells turn into different types of interneurons ― the intriguing cells that dampen electrical signaling in the brain1. But he needed help understanding the next step: measuring the activity of fully developed interneurons.

He found his answer in conference organizer Arnold Kriegstein, then a Columbia University physiologist renowned for his brain-cell recording techniques. Soon after the Delphi meeting, on a much noisier island five thousand miles west, the two scientists began what Fishell now calls the “taxi cab collaboration.”

Downtown at his New York University lab, Fishell transplanted different kinds of interneurons, tagged with fluorescent green molecular markers, into mouse embryos. Once the transplanted mice were born, he transported them uptown by taxi to Kriegstein’s Columbia lab.

“As you might imagine, the taxi bills were killing us,” Fishell ― ‘Gord’ to his friends ― jokes in his tidy office overlooking the East River. “So eventually we moved it all down here.”

Along with answering fundamental questions about mammalian brain organization, watching interneurons’ “handshake” with other brain cells is the key to understanding autism, Fishell says. “When you look at the 30-odd genes that are linked to autism, a remarkable number of them turn up in interneurons,” he says.

This summer, the Simons Foundation gave Fishell a SFARI pilot grant to explore how disruption of five of these genes in mice might lead to brain and behavioral abnormalities similar to those seen in individuals with autism.

“Gord is one of the most creative scientists I know,” says Kriegstein, who now heads the Program in Developmental and Stem Cell Biology at the University of California, San Francisco. “He’s among a small handful of people who are applying the latest molecular and genetic technologies to the problems of cortical development.”

The upper layers of cortex in the mammalian brain house a complicated circuit of cells that transmits information via electrical signals. The signals come from excitatory neurons, cells that originate in these layers and stay there. Interneurons, in contrast, arise deep within the brain and migrate to the upper cortex in the later stages of embryonic development.

Around birth, “a vast army of interneurons comes streaming up and invades the brain,” Fishell says. The cells’ role is to prune synapses ― the relay points between neurons ― and thus dampen the signaling in ways that aren’t fully understood. In a formed mammal, about one in every five brain cells are interneurons.

This delicate balance of excitatory and inhibitory signals is the brain’s way of filtering the constant barrage of sensory information from the outside world ― and what’s probably missing in people with autism, according to Fishell.

“Their filtering mechanism, of being able to decide what it is they want to attend to in the world and what they want to ignore, really doesn’t work properly,” Fishell says. A malfunctioning in interneurons could disrupt this balance and trigger the “noisy brains” characteristic of autism, Fishell says.

Bolstering this hypothesis is the fact that about 30 percent of those with autism have epilepsy, meaning that their neurons fire electrical impulses at a rate that’s up to four times higher than normal. “You can easily imagine this has something to do with the balance of excitation and inhibition,” Fishell says.

Fishell sees the various types of interneurons as “widgets and gadgets of the brain,” meaning that each contributes a specific function in the brain. He identified five types whose genes have been linked to autism. When one of these five ‘widgets’ is knocked out, he’s betting the result will be a mouse with autism.

“Of course, there’s a soft underbelly to all of this,” Fishell says wryly. “What the hell would an autistic mouse look like?”

In September, Thomas Südhof and his colleagues debuted mice with the same mutation in the neuroligin 3 protein that’s been found in some autistic individuals2. These knockouts are more likely to have enhanced spatial memory and to associate with inanimate objects ― behavior Südhof suggests is comparable to those seen in autism.

“The problem with that is I’m not a mouse. I don’t know what mice like,” Fishell says. “So how can I come in and say it looks like my mouse isn’t paying attention to something?”

Rather than observe mouse social behavior, Fishell advocates looking for more quantifiable measures, or endophenotypes, of autism ― such as the frequency of neuronal firing ― in both mice and humans3. “Then we’re no longer talking about some vague behavior,” Fishell says. “We’re talking about, say, a gamma frequency of X, in this part of the cortex.”

Mouse models such as Südhof’s could still prove very useful in understanding autism.

Because scientists do not have access to the brains of humans with autism, pinpointing what goes wrong in the autistic brain is like looking for a needle in a haystack. Having mouse models that mimic the disease, “makes the haystack much, much smaller,” says Weill Cornell Medical College psychiatry professor Stewart Anderson. “To some extent, it doesn’t actually matter if the mouse is autistic.”

Once researchers have a better grasp on the human pathology, he says, “then they can focus on potential treatments that would be useful, and use the mice to test those treatments.”

Complete understanding is only likely to emerge from the joint effort of multiple models and approaches―something Fishell fully endorses.

A few years before the Delphi conference, Fishell, Kriegstein and Anderson organized a New York City ‘Progenitor Club,’ where they’d hop from lab to lab to discuss their unpublished results over beer and pizza.

“[Fishell] is the poster child of collaboration,” Anderson says. “He shares all of his reagents. And everything he publishes is immediately available to anybody who asks.”

At the same time, Fishell has a track record of attempting novel, even risky, experiments4,5. “Gord’s not afraid to build a ladder that nobody’s ever used before, climb up the tree, and pull off something very special,” says Anderson. “A lot of people wouldn’t be willing to try.”

But if Fishell’s at all anxious about his experiments working, it’s masked by the palpable enthusiasm in his voice and demeanor. “My lab is a lot of fun,” he says. Asked what makes it so, he tells the story of a friend of his who was recently tenured: “I said to him, ‘Why does tenure matter?’ And he said, ‘Well, you can take up golf, or you can do something you never would have had the guts to do before.’

“This,” Fishell says, pointing to the video of his caged autistic mice playing on his computer monitor, “is what I never would have had the guts to do before.”