In August 2021, David Sabatini was fired from Howard Hughes Medical Institute and resigned from the Whitehead Institute because of sexual harassment charges. He resigned from his position at the Massachusetts Institute of Technology in April 2022.

Late one October night in 2016, a group of friends set up recording equipment in a hotel lobby and settled in for three hours of wine-fueled banter about a so-called ‘elixir of life.’ The group comprised the molecular biologist David Sabatini, biologist Navdeep Chandel, a physician named Peter Attia, and the well-known podcaster and self-help guru Tim Ferriss. Their gathering spot was in the remote Chilean territory Rapa Nui, better known as Easter Island, where they spent the evening having a free-wheeling, wise-cracking marathon chat, touching on everything from cellular physiology to dietary supplements and the nature of true friendship.

A few days earlier, the group had climbed a 1,000-foot dormant volcano on the island, where the supposed elixir, known as rapamycin, was discovered about half a century ago.

It was something of a pilgrimage, at least for Sabatini. His Twitter profile is decorated with the island’s famous carved stone heads. Rapamycin extends the lifespan of mice and can shut down some cancers; Sabatini, now a professor at the Massachusetts Institute of Technology (MIT), figured out how it works roughly 25 years ago — a discovery that shot him to scientific fame at just 26 years old1.

The protein he identified bears the name mTOR, for ‘mammalian target of rapamycin.’ Nearly every cellular process involved in consuming or generating nutrients and energy, such as growing hair or skin cells, requires the mTOR pathway. The pathway is also overactive in some people with autism and in those with tuberous sclerosis complex (TSC), a related condition2. Its importance is enough to fuel persistent speculation that Sabatini’s findings will someday earn him a Nobel Prize.

One such star in a family is rare enough, but David Sabatini, 50, is evenly matched in scientific creativity and ambition by his brother, Bernardo, who is just a year and a half younger. Bernardo Sabatini, professor of neurobiology at Harvard University, studies autism and is trying to understand the basic workings of the human brain, including in animal models of TSC3,4.

Their father, David Sabatini Sr., is a famous biologist himself: He spent nearly 40 years as chair of New York University’s cell biology department, publishing more than 250 papers. Their mother, Zulema Sabatini, worked long hours as a physician and ran a clinical laboratory.

Both brothers are Howard Hughes Medical Investigators and have won numerous awards. When they encounter difficult problems, they each respond the same way: They invent their way to a solution.

“What’s incredible about them is that they just develop methods and technologies to overcome those barriers,” says Sohail Tavazoie, Leon Hess professor at Rockefeller University in New York City. (Tavazoie was a student in Bernardo’s lab in the early aughts and became friends with David during pick-up basketball games.) For example, Bernardo lived far from the lab during his postdoctoral work, so he built a makeshift microscope in his living room so he could work at home at night. 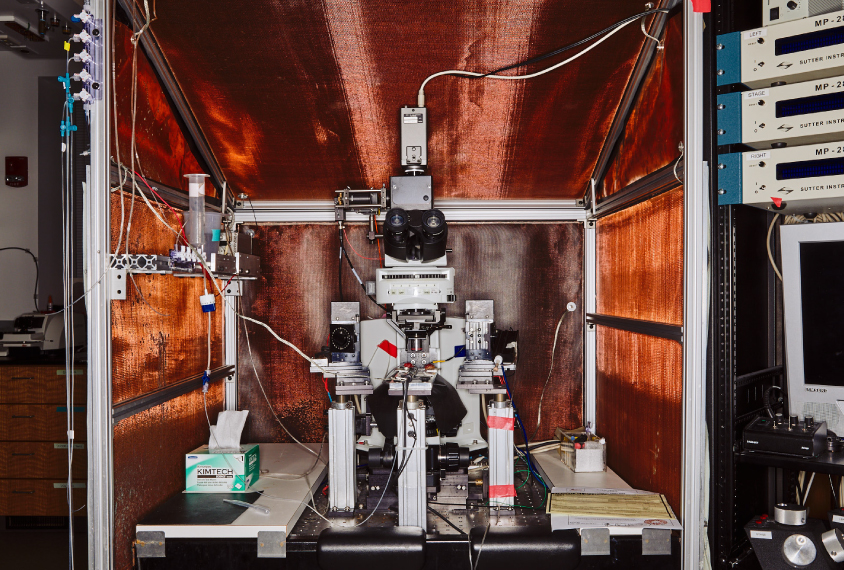 Perhaps it’s not surprising that the Sabatini brothers became scientists. The day Bernardo turned 15, for example, he was serenaded with “Happy Birthday” by Nobel Laureate David Baltimore and about 30 other prominent scientists.

It was 1984, and the brothers were touring Japan with their father. In the afternoons, the teenagers roamed the streets of Kyoto, and at night, they witnessed their father at work with his impressive collaborators.

“Funny things like that didn’t necessarily make me think, ‘Oh, I want to be a scientist,’ but again, showed us an atypical life,” Bernardo says.

The elder Sabatinis had left Argentina’s political upheaval in 1960 to settle first in Manhattan, and later in the suburbs north of New York City. Even as young boys, the brothers were expected to earn top grades in school, and their parents meted out praise in only small doses. They grew up enchanted by the alien-like black-and-white electron microscopy images of cells their father brought home from his lab. They would hole up in a musty room on Saturdays near the lab and play with building blocks shaped like atoms while their father worked. A “crazy number” of art and science books kept them busy at home, David recalls: “My parents would have fights over the books because there were no more shelves, and they were piled up.”

David eventually went to Brown University in Rhode Island for his undergraduate degree and Bernardo to Harvard; both later pursued M.D.-Ph.D.s, with the goal of becoming biomedical researchers.

In keeping with the family tradition of demanding brilliance rather than celebrating it, neither parent attended either of the brothers’ dissertation defenses at the end of their Ph.D. projects. “Those are things our family just kind of takes in stride,” Bernardo says.

Bernardo says he has always been fascinated by how the human brain learns and solves problems. In high school, he began toying with an old mainframe computer and learned to write programs. As an undergraduate, he studied artificial intelligence, but the approach commonly applied in the 1980s — using mathematical algorithms for programming robots to perform tasks — always seemed misguided to him.

By the late 1990s, as a postdoctoral researcher at Cold Spring Harbor Laboratory, he was plumbing the mechanics of the smallest components of synapses, such as the receiving end of the neuronal junctions. He worked with neuroscientist Karel Svoboda, who encouraged his lab members to build customized two-photon microscopes for their work. These scopes probe the brain without destroying the living tissue, so scientists can watch cells at work.

“It was very tantalizing that we didn’t know how it worked.” David Sabatini

With a microscope he helped Svoboda build, Bernardo saw synapses for the first time — and was blown away. “It’s this incredible high-contrast image where you see something bright that’s part of a cell, and around it, it’s all dark,” he says. “It kind of looks like stars in the sky.”

He saw an opening to write custom software to serve the same purpose; software is more accessible and versatile than a tailor-made microscope. The program he wrote is now used by labs across the world. “Bernardo really pushed the technology for imaging synapses,” Svoboda says.

Later, Bernardo would seek to understand circuits in the brain that he believes may underlie an overproduction of synapses in people with autism.

‘From greatness to greatness’:

David, too, was drawn to scientific questions. As a graduate student at Johns Hopkins University in Baltimore, he was supposed to split his time evenly between the hospital and the lab. But he took every opportunity to sneak into the lab.

He finished his medical degree but decided against doing a residency, the next step in his training. “It’s one thing to be a bad scientist; it’s another to be a bad doctor,” he says. He threw himself into research.

His graduate adviser, Solomon Snyder, a prominent neuroscientist and psychiatrist, gave David a long leash to pursue his own projects.

“He’s probably the most independent, intellectually, of any student I’ve ever had,” Snyder says. “He’d be here in the middle of the night and come up with great ideas.”

Snyder was one of few researchers who could get samples of rapamycin (it was not yet commercially available), which he was using as a control in a study of a drug that has a similar structure. “[Rapamycin] had all these potential clinical effects,” David says. “It was just very tantalizing that we didn’t know how it worked.” 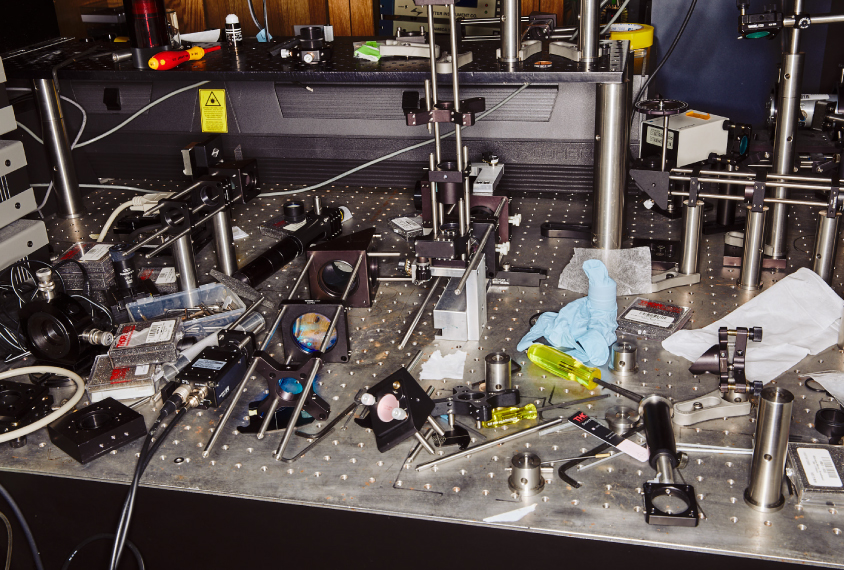 Laser focus: A table in Bernardo Sabatini’s lab displays parts for a microscope that uses lasers to visualize brain circuits.

Determined to find out, he added rapamycin to rat brain and other tissue and found a mysterious protein to which the drug seemed to bind. Within just two years, he debuted a description of the protein, mTOR, in the journal Cell. Based on that and other work, in 1997, at age 29, he launched his own lab at MIT’s prestigious Whitehead Institute.

Since his initial discovery, he has identified most of the molecules that interact with and help activate mTOR. His 25-person team explores how animal cells detect food and grow. His work has amassed awards, including last year’s Lurie Prize in Biomedical Sciences, a $100,000 award for promising biomedical researchers.

The neurobiology building on the Harvard campus where Bernardo works is only a few miles from David’s lab across the Charles River. Although the brothers have never collaborated, their paths are beginning to converge.

Bernardo is still focused on synapses. But one hypothesis now drives his work: Certain autism behaviors, such as repetitive actions, are rooted in an overproduction of synapses between the striatum, a brain region that governs movement and motivation, and the cerebral cortex. The excess is thought to stem from increased neural activity in the cerebral cortex.

It’s possible that excess neural activity in this circuit is related to unchecked molecular activity in the mTOR pathway. It’s just an idea for now, Bernardo says, but exploring it would bring the two areas of research into alignment for the first time.

Such a project would require finding a bright, young researcher to propel it forward, the brothers agree. Someone eager to climb their own volcano or build their own microscope — a new Sabatini for the next generation.