The Arabic sign-language interpreter stood at the front of the auditorium, his gestures perfectly in sync with the presenter’s passionate, French-accented speech.

The audience — more than 2,000 people assembled for the First Gulf Autism Conference in January 2020 — sat with rapt attention. “All these people were so quiet,” remembers Watfa Al-Mamari, a developmental pediatrician at Sultan Qaboos University in Oman and a conference organizer.

“You could hear a pin drop,” recalls Stephen Scherer, a geneticist at the University of Toronto in Canada.

The speaker was child psychiatrist Eric Fombonne, describing how he and others had, in the 1990s, debunked the erroneous idea that vaccines cause autism.

Fombonne pitched his talk at people with little scientific background. His listeners included politicians, policymakers, autistic people and their families, and the general public. Yet even the scientists and clinicians in the auditorium learned something new: Scherer took out his cell phone to snap photographs of Fombonne’s slides — something he says he had never done before — so that he could look up the references later.

In many ways, the talk was itself a snapshot of Fombonne’s four-decades-long career: a mix of rigorous science and public engagement, delivered with the kind of human warmth that makes him a respected colleague and sought-after clinician. Al-Mamari says she remembers seeing him later at the conference, surrounded by autistic people and their families.

Fombonne, 66, is best known for his studies of the patterns of autism distribution and prevalence. “Whenever I had any question about epidemiology, he was the one I would turn to,” says Uta Frith, professor emeritus of cognitive development at University College London in the United Kingdom.

But his contributions to the field are wide-ranging. He has published on topics from genetics to assessment tools, and his curriculum vitae, which includes academic positions in four countries, runs to 94 pages. Within the research community, colleagues say, Fombonne has been unusually good at forging international partnerships and unusually willing to stake out bold positions on the cause, prevalence and nature of autism.

Last year, for example, he waded into a debate about camouflaging, publishing an editorial arguing that the term — often used to describe how some autistic people change their behavior to appear neurotypical — has not been rigorously defined. The editorial prompted a lengthy response from scientists studying the phenomenon, but it wasn’t entirely unwelcome.

Fombonne “challenged the field of camouflaging research in a very constructive manner,” says William Mandy, a psychologist at University College London and one of the authors of the rebuttal. “[His] intervention is helping clarify areas of disagreement and misunderstanding, and is shaping the questions that future camouflaging research should address.”

Fombonne was born in Paris and grew up in an affluent suburb. He was a strong student, interested in mathematics and science. He was also politically engaged and participated in student demonstrations in the late 1960s — activism he attributes to his parents, devout Catholics involved in social justice causes.

In medical school at the University of Paris, Fombonne chose to specialize in child psychiatry. At the time, there was “intellectual excitement about psychiatry because [of] the mystery of the mind,” he says, and child psychiatry seemed to hold the most therapeutic potential.

Another factor, too, helped guide Fombonne’s decision: Around the time he entered medical school, his older sister, Dominique, was diagnosed with schizophrenia. As a young medical student, he accompanied her to hospital emergency rooms on several occasions; after grappling with the illness for more than a decade, she died by suicide in 1986. 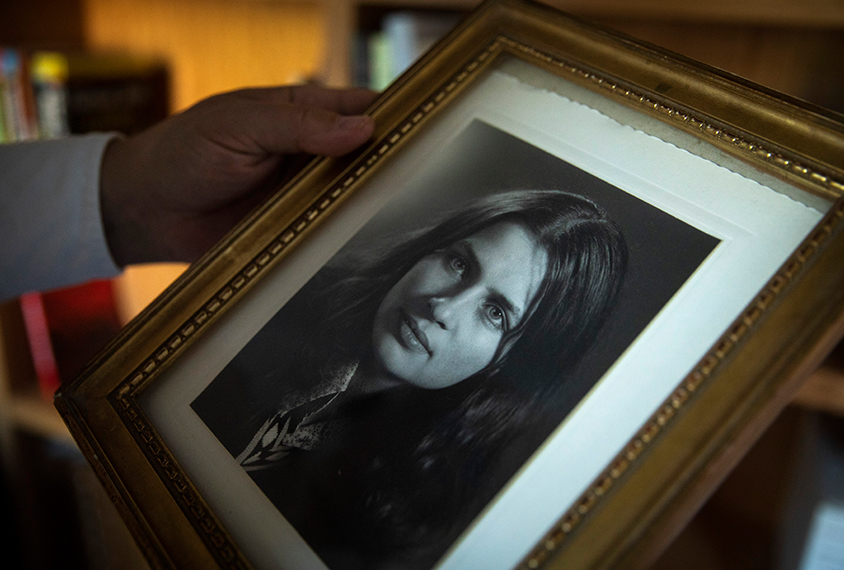 The experience left him keenly aware of the limitations of psychiatric care — and skeptical of theories that didn’t offer any practical help for patients and their families. “It certainly shaped my later sense that I needed to pursue research and to ask questions and challenge the views of the current establishment,” he says.

To that end, in the late 1980s Fombonne launched the first study of the prevalence of child psychiatric conditions in France while on staff at a psychiatric hospital in Paris. His work attracted the attention of a French association of families with autistic children, who inspired him to conduct the first epidemiological studies of autism in France. He soon became an advocate for improved autism care, speaking at conferences and lobbying the French government on the topic.

Fombonne’s epidemiological studies earned him recognition as a rising star, and in 1993 he was recruited to join a group at the Institute of Psychiatry in London led by Michael Rutter, renowned as the ‘father of child psychiatry.’

There, Fombonne joined a community of like-minded clinician-researchers for the first time, he says. “There still are very, very exquisite relationships with some of my peers who I met during that period.”

His position in London also put him at the epicenter of child psychiatry when, in 1998, a bombshell hit: Now-discredited gasteroenterologist Andrew Wakefield published a paper in The Lancet alleging a link between the measles-mumps-rubella (MMR) vaccine and the onset of autism.

Fombonne was immediately skeptical. Within weeks of learning about the paper and before its publication, he had marshaled data from two existing datasets to refute Wakefield’s claims. And after the paper came out, Fombonne conducted multiple studies to test Wakefield’s hypotheses, always with the same result: Wakefield’s science was “completely bogus,” he says, vaccines were safe, and there was no connection between the MMR vaccine and autism.

Wakefield’s paper was later retracted — he had falsified his data — but Fombonne “was really almost prescient in understanding that this was going to have a big effect on families and on our field, and understanding the importance of bringing really rigorous science to evaluate whether that hypothesis was correct,” says Sally Ozonoff, a child psychologist at the MIND Institute at the University of California, Davis, who has known Fombonne for many years.

Fombonne gave talks on the vaccine controversy at medical conferences and at meetings of the Institute of Medicine in the United States. Despite death threats from anti-vaccine activists, he served as an expert witness in vaccine-injury trials. “I was not prepared to do all that in my career,” he says. “I remember I was so shy when I first gave talks in public, and then to be speaking in the court in Texas in English!”

However challenging, the work was fulfilling, he says, because he knew that widespread acceptance of an incorrect explanation of autism’s origin would harm people with autism and their families — and that there was a broader public health risk if people abandoned vaccines.

“It made me sense that the path that I had chosen for my career had a social impact,” he says.

Fombonne expanded his epidemiological work with another big move in 2001, becoming the Canada Research Chair in Child Psychiatry at McGill University in Montreal and head of the child psychiatry department at Montreal Children’s Hospital. From this post, he led a World Health Organization-sponsored review of how geographical and cultural variations impact autism prevalence estimates — work that has been cited more than 2,300 times.

Although Fombonne’s research documented an increase in autism prevalence worldwide, he is skeptical of the ‘autism epidemic’ framing that has dominated some discussions. Instead, he argues that other factors likely contribute to the uptick, such as a broader definition of autism and greater clinical recognition of it — another instance of his insistence on a careful accounting of the data before drawing flashy conclusions, Ozonoff says.

In Canada, Fombonne developed an autism research and clinical program, as well as a training program — the first of its kind in the country. Over the course of a decade, the program educated at least 150 early-career scientists, many of whom are now prominent autism researchers. “It had the reputation, even within the first few years, that you want to be seen there,” says Scherer, who taught in the program.

Al-Mamari participated in the training program in the mid-2000s and trained under Fombonne, as did Mayada Elsabbagh, a neuroscientist at McGill University who worked on the World Health Organization review and now directs a similar training program.

“Eric had a big influence in terms of my research trajectory and opened up opportunities that were quite nice and exciting, and ones that I still pursue today,” says Elsabbagh, who has been his frequent collaborator since. 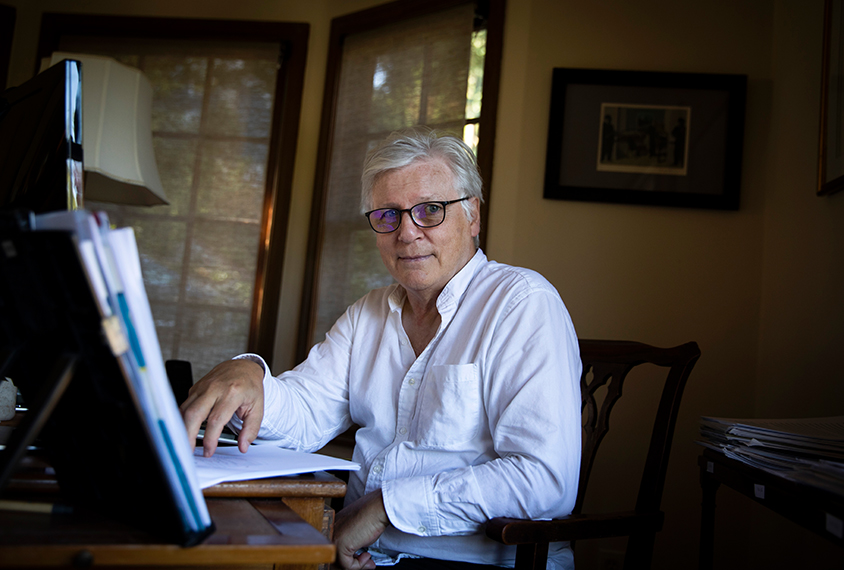 Fombonne’s collaborations and epidemiological studies have taken him around the globe, to Mexico, China, Oman, Qatar, Kazakhstan, Morocco and Brazil.

“He is the ‘active ingredient’ in research teams now internationally,” Elsabbagh says. “I don’t know anybody who has done the same scale of international partnerships.”

And since 2011, he has been working to build another autism research program and clinical center at Oregon Health & Science University in Portland — a relocation prompted by his then-wife, who had lived in the city previously.

“I said, ‘Portland? Where is it, first? What is there for me?’” Fombonne recalls jokingly.

In each new country where he contributes to an epidemiological study or takes up an academic post, Fombonne aims not only to capture autism prevalence, but to build regional research and clinical capacities, and provide data that local policymakers need to develop autism services.

Fombonne builds partnerships not just on good science, but on good company, Elsabbagh adds. After a regional International Society for Autism Research meeting in Chile in 2019, for instance, political unrest forced them to road-trip out of the country, along with several other scientists. “In theory the circumstances were not very pleasant, but we actually had a really good time,” she says.

The coronavirus pandemic has put a temporary damper on Fombonne’s scientific travels, but he’s finding new ways to engage in social issues. Every weekend from March through June, he volunteered at a mass vaccination clinic at the Portland airport: “I put Pfizer, Moderna and J&J shots in thousands of arms,” he says. “Older arms at first, and later, younger and younger arms!” 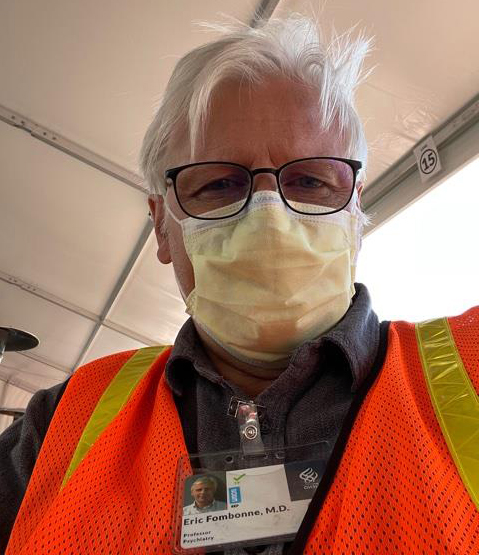 Like his more usual work, it afforded him a mix of clinical practice and big-picture impact. “I enjoyed the experience,” he says. “Contacts with people were relatively brief, but I could see a cross-section of society and many interesting facets of human experience.”