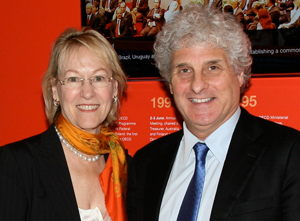 Power couple: In addition to a dizzying array of peer-reviewed publications, Andrew Meltzoff and Patricia Kuhl have written a popular book on brain development, given TED talks and lobbied political leaders.

Andrew Meltzoff shares many things with his wife — research dollars, authorship, a keen interest in the young brain — but he does not keep his wife’s schedule.

“It’s one of the agreements we have,” he says, laying out the rule with a twinkle in his eye that conveys both the delights and the complications of working with one’s spouse.

Meltzoff, professor of psychology at the University of Washington in Seattle, and his wife, speech and hearing sciences professor Patricia Kuhl, are co-directors of the university’s Institute for Learning and Brain Sciences, which focuses on the development of the brain and mind during the first five years of life.

Between them, they have shown that learning is a fundamentally social process, and that babies begin this social learning when they are just weeks or even days old.

You could say the couple is attached at the cerebral cortex, but not at the hip: They take equal roles in running the institute, but they each have their own daily rhythms and distinct, if overlapping, scientific interests.

Kuhl studies how infants “crack the language code,” as she puts it — how they figure out sounds and meanings and eventually learn to produce speech. Meltzoff’s work focuses on social building blocks such as imitation and joint attention, or a shared focus on an object or activity. Meltzoff says these basic behaviors help children develop theory of mind, a sophisticated awareness and understanding of others’ thoughts and feelings.

All of these abilities are impaired in children with autism. Most of the couple’s studies have focused on typically developing infants, because, they say, it’s essential to understand typical development in order to appreciate the irregularities in autism.

Both also study autism, which can in turn help explain typical development.

In addition to a dizzying array of peer-reviewed publications, the duo have written a popular book on developmental psychiatry, The Scientist in the Crib, and promote their ideas through TED talks and by lobbying political leaders.

Geraldine Dawson, chief science officer of the autism science and advocacy organization Autism Speaks and a longtime collaborator, calls Meltzoff and Kuhl “the dynamic duo.” “They’re sort of bigger-than-life type people, who fill the room when they walk into it,” she says.

Meltzoff and Kuhl’s story began with a scientific twist on a standard rom-com meet cute.

It was the early 1980s, and Kuhl, who had recently joined the faculty at the University of Washington, wanted to understand how infants hear and see vowels. But she was having trouble designing an effective experiment.

“I kept running into Andy’s office,” which was near hers, to talk it through, Kuhl recalls.

Meltzoff had done some research on how babies integrate what they see with what they touch, a process called cross-modal matching1. Soon he and Kuhl realized that they could adapt his experimental design to her question, and decided to collaborate.

They showed babies two video screens, each featuring a person mouthing a different vowel sound – “ahhh” or “eeee.” A speaker placed between the two screens played one of those two vowel sounds.

They found that babies as young as 18 to 20 weeks look longer at the face that matches the sound they hear, integrating faces with voices2.

But that wasn’t the only significant result from those experiments.

“Speaking only for myself, I will say I became very interested in the very attractive, smart blonde that I was collaborating with,” Meltzoff says. “Criticizing each other’s scientific writing at the same time the relationship was building was… interesting.”

And effective: Their paper appeared in Science in 1982, and the couple married three years later.

Listening to Meltzoff tell that story, it’s easy to understand why some colleagues say he is funny but they can’t quite explain why. His humor is subtle and wry. More obvious is his passion, not just for science, but for working out the theory underlying empirical results. Even his wife describes his personality as “cerebral.”

“He just has this laser vision for homing in on what is the heart of the issue,” says Rechele Brooks, research assistant professor of psychiatry and behavioral sciences at the University of Washington, who collaborates with Meltzoff on studies of gaze.

For example, in one of his earliest papers, Meltzoff wanted to investigate how babies learn to imitate. He found that infants just 12 to 21 days old can imitate both facial expressions and hand gestures, much earlier than previously thought3.

“It really turned the scientific community on its head,” Brooks says. 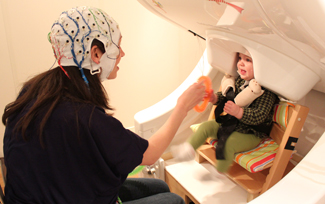 Face to face: Meltzoff and Kuhl are developing a method to simultaneously record the brain activity of two people as they interact.

Meltzoff continued to study infants, tracing back the components of theory of mind to their earliest developmental source. That sparked the interest of Dawson, who had gotten to know Meltzoff as a student at the University of Washington in the 1970s, and became the first director of the university’s autism center in 1996.

Meltzoff and Dawson together applied his techniques to study young, often nonverbal, children with autism. In one study, they found that children with autism have more trouble imitating others than do either typically developing children or those with Down syndrome4.

In another study, they found that children with autism are less interested in social sounds such as clapping or hearing their name called than are their typically developing peers5.  They also found that how children with autism imitate and play with toys when they are 3 or 4 years old predicts their communication skills two years later6.

Most previous studies of autism had focused on older children, Dawson says, and this work helped paint a picture of the disorder earlier in childhood.

Kuhl began her career with studies showing that monkeys7 and even chinchillas8 can distinguish the difference between speech sounds, or phonemes, such as “ba” and “pa,” just as human infants can.

“The bottom line was that animals were sharing this aspect of perception,” Kuhl says.

So why are people so much better than animals at learning language? Kuhl has been trying to answer that question ever since, first through behavioral studies and then by measuring brain activity using imaging techniques.

Kuhl is soft-spoken, but a listener wants to lean in to catch every word. Scientists who have worked with her describe her as poised and perfectly put together, a master of gentle yet effective diplomacy.

“She has her sort of magnetic power to pull people together,” says Yang Zhang, associate professor of speech-language-hearing sciences at the University of Minnesota in Rochester, who was a graduate student and postdoctoral researcher in Kuhl’s lab beginning in the late 1990s.

At one point, Kuhl turned her considerable powers of persuasion on a famously smooth negotiator, then-President Bill Clinton.

Kuhl had shown that newborns hear virtually all speech sounds, but by 6 months of age they lose the ability to distinguish sounds that aren’t part of their native language9.

At the White House Conference on Early Childhood Development and Learning in 1997, she described how infants learn by listening, long before they can speak.

Clinton, ever the policy wonk, asked her how much babies need to hear in order to learn. Kuhl said she didn’t know — but if Clinton gave her the funds, she would find out. “Even the president could see that research on the effects of language input on the young brain had impact on society,” she says.

Kuhl used the funds Clinton gave her to design a study in which 9-month-old babies in the U.S. received 12 short Mandarin Chinese ‘lessons.’ The babies quickly learned to distinguish speech sounds in the second language, her team found — but only if the speaker was live, not in a video10.

Her results also suggest that the language problems in children with autism may be the result of their social deficits.

“Children with autism will have a very difficult time acquiring language if language requires the social gate to be open,” she says.

Over the years, Kuhl and Meltzoff have had largely independent research programs, but her recent focus on the social roots of language dovetails with his long-time focus on social interaction.

These days, they are trying to develop ‘face-to-face neuroscience,’ which involves simultaneously recording brain activity from two people as they interact with each other.

This approach would allow researchers to observe, for example, what happens in an infant’s brain when she hears her mother’s voice, and what happens in the mother’s brain as she sees her infant respond to her. “It’s going to be very special to do,” Meltzoff says enthusiastically, even though the effort is more directly related to Kuhl’s work than to his own.

It’s clear that this fervor for each other’s work goes both ways.

“That’s one of the great things about being married to a scientist,” Meltzoff says. “When you come home and think, ‘God, I really nailed this methodologically,’ your wife, instead of yawning, leans forward and says, ‘You did? Tell me about the method, that’s so exciting.’”