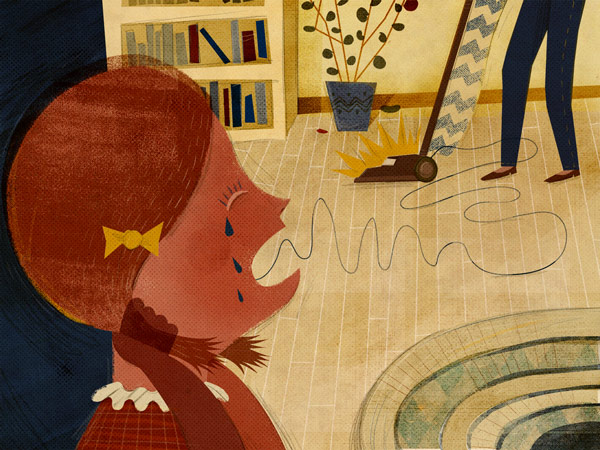 Nick Ogonosky Piercing peal: Many people with autism are hypersensitive to sound.

The differences are apparent in simple, widely used tests that involve light touches on the hand and listening to different kinds of sounds through headphones, underscoring the value of old-fashioned neurological tests for understanding neurodevelopmental disorders.

Sensory differences are among the diagnostic criteria for autism in the current edition of the “Diagnostic and Statistical Manual of Mental Disorders”(DSM-5). At least 70 percent of people with autism are thought to have some sensory dysfunction: Some individuals with the disorder are hypersensitive to sounds; others recoil from hugs.

But sensory difficulties remain a poorly understood aspect of autism, and it’s unclear how they relate to the disorder’s core symptoms, such as social and communication difficulties.

“The nature of the sensory differences will contribute to the label that [children] end up getting.”

“I wanted to look at kids who had hyper- and hypo-sensitivity to sound and touch regardless of whether they had a label of autism,” says study leader Elysa Marco, associate professor of neurology, pediatrics and psychiatry at the University of California, San Francisco.

By clarifying what is unique about sensory problems in autism, the research could help zero in on the fundamental nature of the disorder.

“A big question in autism research is whether it’s just a collection of traits that happen to randomly come together, or is autism really its own thing,” says Tal Kenet, instructor in neurology at Harvard Medical School, who was not involved with the work. “One way to tackle the question is exactly the way they’re doing it.”

Marco’s team tested sound and touch processing in 19 typically developing boys, 20 with autism and 15 with SPD, all between the ages of 8 and 12 years. Many studies of sensory difficulties rely on parent questionnaires, but these researchers also used standard neurological tests.

The boys donned headphones and repeated different numbers simultaneously piped to different ears to test their ability to process multiple streams of auditory information. They reported the order of tones of different pitches to assess their memory for the sounds, and repeated syllables uttered above background noise to show how well they could distinguish the sounds.

As a group, boys with autism do significantly worse on these tasks than either the controls or boys with SPD.

Some children with SPD still have deficits in auditory processing, but their problems may not be severe enough to stand out in a study of this size, says Marco. In fact, the researchers found, among both children with autism and those with SPD, individuals who do worse on the auditory processing tests tend to struggle more with language and communication in everyday life.

“That’s something we would kind of expect intuitively, but it’s nice to see data supporting it,” says Carissa Cascio, assistant professor of psychiatry at Vanderbilt University in Nashville, Tennessee, who was not involved in the work.

The researchers need to confirm the results in other groups of children to help clarify these patterns, Kenet says. For example, studying highly verbal children with autism as well as children with a form of SPD called central auditory processing disorder may help researchers pinpoint the specific nature of auditory problems in autism.

The researchers also assessed the children’s ability to discriminate fine touch. In one test, the children closed their eyes and reported whether prongs various distances apart felt like one or two points when placed along a finger. In another, they noted the orientation of a plastic mesh pressed against a finger. No differences emerged among the groups.

“It seems like if there’s a story for touch and autism, it might be more relevant for us to start looking more at affective or emotional touch rather than discriminative touch,” says Cascio. Children with autism may respond differently to emotional touch, such as a caress, than do typically developing children or those with SPD.

The children with autism and those with SPD both had trouble on a more sophisticated task in which they had to draw shapes that they felt the researchers trace on the backs of their hands. This finding suggests that the problems with touch in children with either autism or SPD primarily stem from more complex processes required to interpret the traced shape, remember it and transfer it to a different medium.

The children with SPD were also less sensitive than the others to touch with a thin filament, suggesting the presence of more extensive tactile deficits in this group.

The results suggest that auditory abnormalities lead to communication impairments and an autism diagnosis, whereas greater tactile difficulties may characterize children with SPD. “The nature of the sensory differences will contribute to the label that they end up getting,” Marco says.

The findings are in line with previous brain imaging studies in which Marco and her colleagues found that children with autism and those with SPD both have structural differences in parts of the brain relevant to touch, compared with controls, but only those with autism have differences in an area associated with sound processing and language2. Unpublished data from a functional imaging study show similar patterns, Marco says.